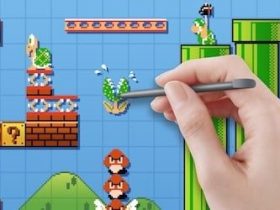 Nintendo closed The Game Awards 2014 by sharing new The Legend of Zelda for Wii U gameplay footage, allowing us to see how development is progressing.

Creator Shigeru Miyamoto was joined by series producer Eiji Aonuma as they explored the game’s overworld, showing how the Wii U GamePad can be used to set waypoints around the expansive world around you.

The duo also revealed that Link’s sailcloth, which appeared in Wii’s The Legend of Zelda: Skyward Sword, will make a return, after Aonuma suddenly jumped off a nearby cliff. While they also showed Epona, who can automatically gallop through your surroundings and will steer clear of any trees that fall in her path.

We were briefly shown combat, where players can fight with either sword or bow while on horseback, while Link can leap from the saddle to fire arrows at enemies in slow motion – as seen in the E3 2014 reveal trailer.

The Legend of Zelda will release exclusively for Wii U in late 2015.