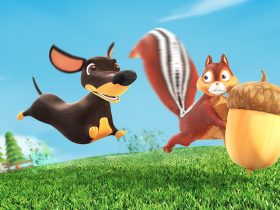 Save Your Nuts Unleashes Multiplayer Mayhem On Nintendo Switch This Month

I’ll be honest, the arrival of Two Point Hospital couldn’t have come at a crueller time, my last seven or so days a blur of high fevers, constant body shivers and headaches that reduced my mind to a slow and dizzying mess. A game entirely focused around curing sick people and I couldn’t even keep my own body temperature to a somewhat stable level. The irony was not lost on me that’s for sure. Still as unenjoyable and annoying as being ill is that is definitely not the case with Two Point Hospital, a loving call back to the much-loved management sim Theme Hospital many remember so fondly.

Two Point Hospital will likely feel very familiar to anyone who played the late nineties hit Theme Hospital. So much so in fact that the game could easily pass as its long-awaited sequel let alone a spiritual successor to it. The seemingly never-ending list of déjà vu moments comes as little surprise given the lead talent behind this game was also responsible for the original Theme Hospital. For older fans, this will end up being an undeniably warm and familiar experience, but one that feels noticeably modern too.

Managing a hospital sounds about as relaxing as juggling three chainsaws with a python hanging from your neck and to be a success in Two Point Hospital will require you to embrace this feeling of chaos. When things are going smoothly you can guarantee that won’t be the case for long be it unhappy staff demanding higher salaries, a new illness rearing its ugly head at the worst possible time or just a general lack of funds to dip into just to solve your next quickly escalating problem. Your role will quickly shift from planner to budget management to customer relations to damage control – to name just a few – and your ability to make the right calls and keep things ticking along will truly be tested especially as the game starts to throw more and more obstacles your way.

All that must paint a pretty intimidating picture even for a hospital management simulator but truth be told, Two Point Hospital does a pretty admirable job walking you through and getting comfortable with its many systems. Systems that only continue to grow in complexity as the game continues.

Before any patients can walk through the door, you’ll need to start piecing together your hospital room by room adding everything from a reception desk to a GP’s office, ward, pharmacy and plenty more imaginatively named treatment chambers. Making the most of your limited space is key especially since you’ll continue to build as new illnesses come into play or new requests are made. Then, of course, you’ll need to choose your staff each of which has their own breakdown of traits and skills (not to mention a funny name too). As you’d expect the better the quality of employee the more expensive they are, a problem you’ll find yourself dealing with constantly. Sure, you could opt for a cheaper nurse but you might also find they spend too long in the staff room and less time actually working. Then, of course, you need to keep the staff happy, whether that’s employing extra help to lighten the workload, installing some entertainment to let them unwind or meeting the demand for a raise in salary.

Of course, the same goes for patients too who outside the obvious goal of being cured from their ailment, will also need to be made as comfortable as possible throughout their stay. That means plenty of seating, vending machines and even plants to keep their spirits high. Keeping your hospital clean and free from vomit or dying plants will also go a long way in keeping the patients rolling in. It’s just another duty in a long list that needs constant management.

The game’s campaign will see you hopping from hospital to hospital doing your best to hit certain targets and earn yourself up to three stars. While you’re free to move right onto the next after hitting a one-star rating, I found myself just as eager to stick around and try to hit my newly raised set of targets and improve my hospital’s standing. Even when you do choose to move on, you’re still free to return at any point and better still, use any new rooms or items you’ve unlocked since including a golden toilet.

Included with the console version are two of the three major expansions released on PC that both include more hospitals to build, new diseases to cure and even more problems to deal with (including avalanches and frog storms). The main campaign is already pretty lengthy and to have the extra content thrown in too is a great bonus.

Everything is wrapped in a brilliantly British sense of humour that’s hard not to love. The music is bouncy, the radio DJ makes entertaining remarks and the overall look of the game will have you poking around observing the often-amusing events taking place throughout your hospital. Illnesses steer away from realism instead opting for puns such as the excellently named Jest Infection, a disease that sees patients walk in dressed as clowns. Light-Headed is another early game affliction where the patient’s head has been replaced with a lightbulb and requires replacing in the De-Lux Clinic. Real illnesses aren’t fun and Two Point Hospital’s insistence on creating its own wacky line-up keeps things feeling light-hearted and entertaining rather than a depressing mirror on reality.

With a game that demands you juggle so much at the same time, of course, you want the controls to be able to cater to that. Two Point Hospital was originally a PC game – a fact that always has me worried whenever a console port gets announced – but the end results here are certainly strong albeit lacking in one major area. First of all, the good, using button controls works surprisingly well and after clearing my first couple of hospitals I found myself creating and jumping about the menu at a decent clip. The control stick movement can feel a little finicky at times making selecting specific items or people difficult but that’s perhaps my only real issue with what is a really solid translation. Unfortunately, the game doesn’t support any touch screen functionality whatsoever, an odd choice especially considering it seems a perfect fit for the genre. Again, another example of a developer forgetting to make use of one of the Switch’s greatest features.

The game sports a rather clean visual style that makes monitoring the unfolding events easy even when your hospital is packed tight with rooms and patients aplenty. Playing the game docked is preferable – a management game always benefitting from more screen – but that isn’t to say handheld mode isn’t also a viable option –  just expect to be making stronger use of the zooming ability. Unfortunately, the game is prone to the occasional freezing or loss of frames particularly when an alert or event kicks in, saving or when things are particularly busy. The load times, too, feel a little on the long side. Of course, these sorts of things can be fixed with a patch and developers Two Point promise improvements as soon as day one.

Two Point Hospital is a deep and challenging management sim coated in goofy and charming layers of humour. For some, this will be a warm and nostalgic experience sure to kick-start fond memories but to be honest regardless of your familiarity with the game’s past inspiration there’s plenty of fun (and stress) to be had here with Two Point Hospital.