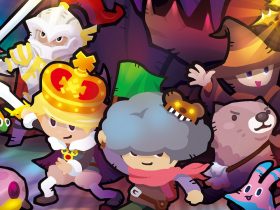 Watch Over A JRPG Theme Park In Heroland On Nintendo Switch

PlayStack and Final Boss Games have confirmed that Super Dodgeball Beats’s release on Nintendo Switch has been delayed into September.

The developer has taken inspiration from Elite Beat Agents, Rhythm Paradise, and Taiko no Tatsujin to create this competitive music-rhythm game.

Super Dodgeball Beats will tell the story of three failing schoolkids who live in a world where dodgeball hysteria has hit its peak and taken over the world as a mainstream sport.

After deciding to form their own team, and end up winning their first tournament – much to their surprise. Now National Major League champions, they must defeat blood-thirsty vampires, electric-infused pensioners, and mutated aliens to win the title and fulfill their dreams.

With a unique manga art style and 18 tracks that have looked to pay homage to the game’s Japanese inspiration, you must find your beat in the game’s single-player story mode and local multiplayer.

That will see you engage in an energy tug of war with the opposing team, required to perform correctly-timed moves while using power-ups and super moves such as grenades and donuts.