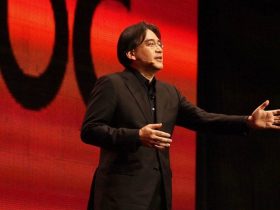 Virtual Console (Wii U)
* Mario Tennis: Power Tour, Nintendo – $6.99
Think you’ve got the strokes to go toe-to-toe with the best tennis players in the Mario universe? Go head-to-head in a single match, or team up with another character and play doubles. Set out on a journey to greatness and test your topspin in this role-playing sports adventure. Customize your stats and equip Power Shots to send your opponents reeling. Can you defeat the current champions and become the top-ranked tennis player?

Wii U Download Software
* Armillo, Fuzzy Wuzzy Games – TBC
Armillo is a 3D action-platformer with a massive amount of game-play elements that mix the classic with the new. Roll, jump and boost through multiple spherical worlds as Armillo, a space armadillo. The game features off-TV play, Wii U Pro Controller support and an optional tilt control mechanism.

* Bombing Bastards, Sanuk Games – $6.99
Have a blast! Bomb oodles of nasty critters in a series of 30 wicked mazes! Defeat hellish bosses in heroic fights! Play solo, or up to 5 players in merciless battles! Embark on a hilarious journey with the witty Dr. Wallow to conquer the galaxy in this explosively fun arcade game!

* Guacamelee! Super Turbo Championship Edition, DrinkBox Studios – $14.99
Guacamelee! is an action-platformer set in a magical, Mexican-inspired world. Explore lively towns and dangerous temples, unlock new luchador powers and suplex some skeletons in this expanded version of the original game. Enjoy off-TV play or track your progress through the world using the map on the Wii U GamePad controller.

* Internal Invasion, Bear Box Media – $4.49
Internal Invasion is a unique gravity-based platformer. Journey deep into the body as it gets more and more infected to find and defeat the source of the virus. Collect pills to gain the power to guide Ro-Bert’s flight path and complete the timer challenge to gain an extra score bonus!

* Poker Dice Solitaire Future, RCMADIAX – $1.99
In Poker Dice Solitaire Future, you simply roll the dice and try to build your best 5-card poker-style hand. You get rewarded points for every successful match and can even earn bonus points under certain conditions. Be careful, you if you don’t create a match, then you lose points. Go for a high score and share your best with others on Miiverse! Grab this exciting title today!

* ZaciSa’s Last Stand, ZeNfA Productions – $2.99
ZaciSa’s Last Stand is a simple, yet challenging, 2D tower defense game set in space. The main concept is that you have to defend your base from an onslaught of enemy ships that seek to destroy you and your way of life. To do this, you will deploy different Bot weapons, such as a Sentry or Bomber to destroy them before they get to your base. The game will start out easy enough, at least in theory, with only something small, like twenty weak enemies. Every level you survive will result in more enemies with increasing strength. You gain points and money for every ship you destroy, as well as a nice bonus at the end of each round. You use this money to not only build more Bots, but also different kind of upgrades.

WiiWare
* Karaoke JOYSOUND, Nintendo – Free
Karaoke JOYSOUND is a WiiWare game that allows you to enjoy online karaoke in the comfort of your home. Going online gives you access to a large library of songs, with more being added all the time! Your voice’s pitch is displayed while you sing, and you can also sing along with guide vocals on some songs. Using the scoring system ranks your performance, and you can also see how you fare against others in the rankings singing the same song. What’s more, your initial software purchase comes with a complimentary 6-hour ticket (limited to one use).

3DS Download Demo
* Tomodachi Life, Nintendo – Free
Try it before you buy it. Download the free demo version of Tomodachi Life and see what happens when you set your Mii population loose on hilarious adventures. Then transfer your progress to the full game if you later purchase it.

3DS Download Software
* Bike Rider DX2: Galaxy, Spicysoft Corporation – $2.99
Bike Rider DX2: Galaxy takes you on a crazy ride to space, travelling 12 different planets based on the zodiac signs in the Galaxy Tour. A set of power-up items will grant you special abilities, like turning your little rider into a funky frog or letting you freely fly around the stage, while each course is full of dangerous gimmicks such as lasers, spiked blocks or giant whirlwinds. Furthermore, the Grand Prix mode lets you challenge players all over the world in an endless random parcour featuring all gimmicks in the whole game. And if that’s not enough, a free to download Special Stage will shoot you to the moon!

* City Mysteries, Selectsoft – $4.99
Alone in a strange city, you are surrounded by mysterious objects everywhere you turn. Can you recover all the lost items before time runs out? Search buildings, streets, landmarks and more as you seek and find hidden objects in New York, Paris, Moscow and London! Delve into detailed indoor and outdoor scenes filled with over 1000 carefully placed items, plus enjoy a challenging sliding tile puzzle for each city. As you unlock each new scene, you’ll be drawn deeper into the hidden object hunt. Are you ready to travel the world with City Mysteries?

* Glory of Generals, CIRCLE Entertainment – $9.99
Glory of Generals is a turn-based strategy game set during World War II. 64 campaigns between 1939 AD and 1945 AD including the Western front, the Eastern front, North Africa, and Antarctica. As a soldier with the either the Ally or Axis forces, you can upgrade bases, repair troops or get promoted to marshal. Call upon 102 famous generals for help including Eisenhower, Rommel, Patton, and Zhukov.

* Squids Odyssey, The Game Bakers – $14.99
Squids Odyssey is a unique mix of an action and turn-based RPG. With their colorful realm under siege, a scrappy shoal of Squid heroes has no other choice but to fight back. Build your team of heroes and throw them into epic turn-based battles against corrupted crabs and shrimps. Squids Odyssey includes the two original campaigns from Squids and Squids Wild West, along with original content.

Nintendo DSiWare
* Mysterious Stars: A Fairy Tale, Collavier Corporation – $4.99
Entrusted with the God of the Stars’ will, the ability to connect the stars is now yours. The God of the Stars is known to help people when they are in need, but he is getting old and would be pleased if you could help him a little. In order to deliver items that will be useful for the people down there, complete the drawing by connecting the stars. Based on the game that everyone played at least one time in their life, Connect the Dots or also called Dot-to-Dot.