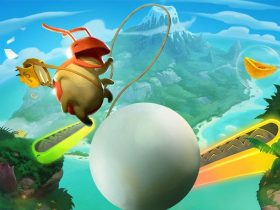 2Awesome Studio and Frostwood Interactive have announced that Rainswept is now available on Nintendo Switch.

This murder mystery game has been released as part of the 2Awesome Partners initiative, and promises to take you “on an emotional adventure in a small town affected by a double shooting.”

You will help Detective Stone after he arrives in the small town of Pineview to help the local police force investigate a seemingly simple case.

After a couple – Chris and Diane – are found dead in their kitchen, the locals believe that it was a murder-suicide case – speculation that is fuelled by rumours that surrounded the turbulent nature of their relationship.

Working with the driven and empathetic Amy Blunt, you must “unravel entangled threads of love, relationships and unresolved trauma.”

That will ultimately see you discover the truth behind Chris and Diane’s story. However, the more that Detective Stone pursues the case, the more that his own past will come back to haunt him and push his sanity even closer to the edge.

Rainswept is now available on the Nintendo eShop for Nintendo Switch worldwide.