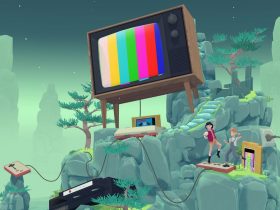 The Mr. DRILLER series has always remained one that for whatever reason has slipped by my radar unnoticed, the small handful of games that actually made it over to our shores something I’d either seen in magazines or online but never experienced for myself. Which brings us to the Nintendo Switch or as I like to call it The Console of Second Chances™ thanks to how often it continues to introduce me to series and games I missed out on first time around. Mr. DRILLER DrillLand isn’t an entirely new experience but rather an updated version of the 2002 GameCube release, a game many fans claim to be one of the best entries in the series. What better place for me to start then?

The Mr. DRILLER games focus around guiding your character down to the bottom of a vertical stage by drilling through coloured blocks all whilst avoiding getting crushed by other falling blocks and maintaining your oxygen level through grabbing stray capsules. Any falling blocks that match up with others of the same colour will then disappear creating a chain of sorts. The general idea is a simple one but like most other relatively straightforward puzzlers, it proves to be a highly replayable and offer ample chance for chasing high scores (especially with the inclusion of online leaderboards).

Mr. DRILLER DrillLand while offering the traditional mode type also packs a few extra tricks up its sleeve, with the game taking place in a theme park and each of its five main attractions essentially acting as their own mode type. First off, World Drill Tour is your traditional no-nonsense Mr. DRILLER experience. Drindy Adventure meanwhile has an Indiana Jones-style look to it tasking the player with collecting golden statues and avoiding rolling boulders and spike traps. Horror Night House – the theming I probably don’t need to tell you based on the title alone – sees you using holy water on blocks that ghosts have taken over in order to turn them into Drystals and advance to the next floor. You’ll need to keep your holy water replenished along with your health by avoiding bats and falling blocks.

Star Driller – taking place in space – throws in power-ups that can both hinder and help you on your journey downward. It makes things a little more unpredictable but at the same time more exciting too. The Hole of Druaga is perhaps the most complex of the bunch having you explore a series of interconnected dungeon-rooms gathering keys to take on a final boss. Along the way, you’ll come across enemies that need attacking and power awarding Dristones that can be stored and used at any time. This mode has a much more strategic-feel to it largely due to the fact your health is not depleting over time but rather with every move you make. It really forces you to think about your next move – a nice variant compared with some of the other faster-paced modes.

What impressed me most about Mr. DRILLER DrillLand is that despite there being a healthy number of varying mode types, not one of them felt particularly weaker than the others. Sure, I may have found myself more in the mood for certain modes every time I loaded the game up, but that wasn’t a reflection on their changing quality. If I felt like something a little more fast-paced then I’d opt for Drindy Adventure. If I wanted something that required a little more thought I’d load up The Hole of Druaga or Horror Night House.

As you progress through the game’s five attractions, you’ll face off in boss battles, unlock tougher levels and even earn currency used for purchasing collectables and more importantly items that will help you when playing – the latter proving especially useful during those later levels. Speaking of help, the game also offers a casual mode again aimed at making the game easier and more accessible for less experienced players.

Multiplayer for up to four players is also included however the options feel more limited than what’s available should you be drilling solo. Racing against one another in split-screen is highly enjoyable, the added chaos of power-ups a welcome feature while having everyone battling on the same playing field has its moments too, however, I just wish there was more especially after being spoiled with the wealth of options in games like Puyo Puyo Tetris. Puzzle games can be just as popular for our household when playing together and it would have been nice to see more in this department.

Don’t let the thought of this being an older GameCube title concern you when it comes to the Switch version’s visuals with the game’s art looking rather nice and sharp with its new HD coat. It also doesn’t hurt that everything is sold colourful and full of personality – from the characters to the attractions. Better still is the game’s fantastic soundtrack, a mixture of energetic and bouncy tunes that will remain firmly implanted in your head long after you’ve put the controller down. If there’s one thing that I wasn’t the biggest fan of though it’s the dialogue/cutscenes between characters, something I’d rarely want to pay much attention to.

Mr. DRILLER DrillLand is a brilliantly fun puzzler that takes its core mechanic and twists it in some really interesting – and more importantly fun – ways. I’ve played a lot of puzzle games on Nintendo Switch and while Mr. DRILLER DrillLand plays very different from any of them, it still has that same compelling force that brings me back for one or two more runs.