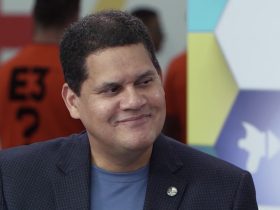 Tetris had once been propelled into superstardom when the relentless building block puzzler landed on Game Boy, while western audiences may be more familiar with the quirky Puyo Puyo mechanics thanks to Kirby’s Ghost Trap and Dr. Robotnik’s Mean Bean Machine. Where one has players stacking blocks to create whole lines the other tasks you with matching four characterised blobs, tumbling down the screen in different shapes at an increasingly alarming speed.

With each being as addictive as one another, the puzzle brands now collide in Puyo Puyo Tetris, a particularly frantic mashup that is as hilariously chaotic as it is captivatingly brilliant. 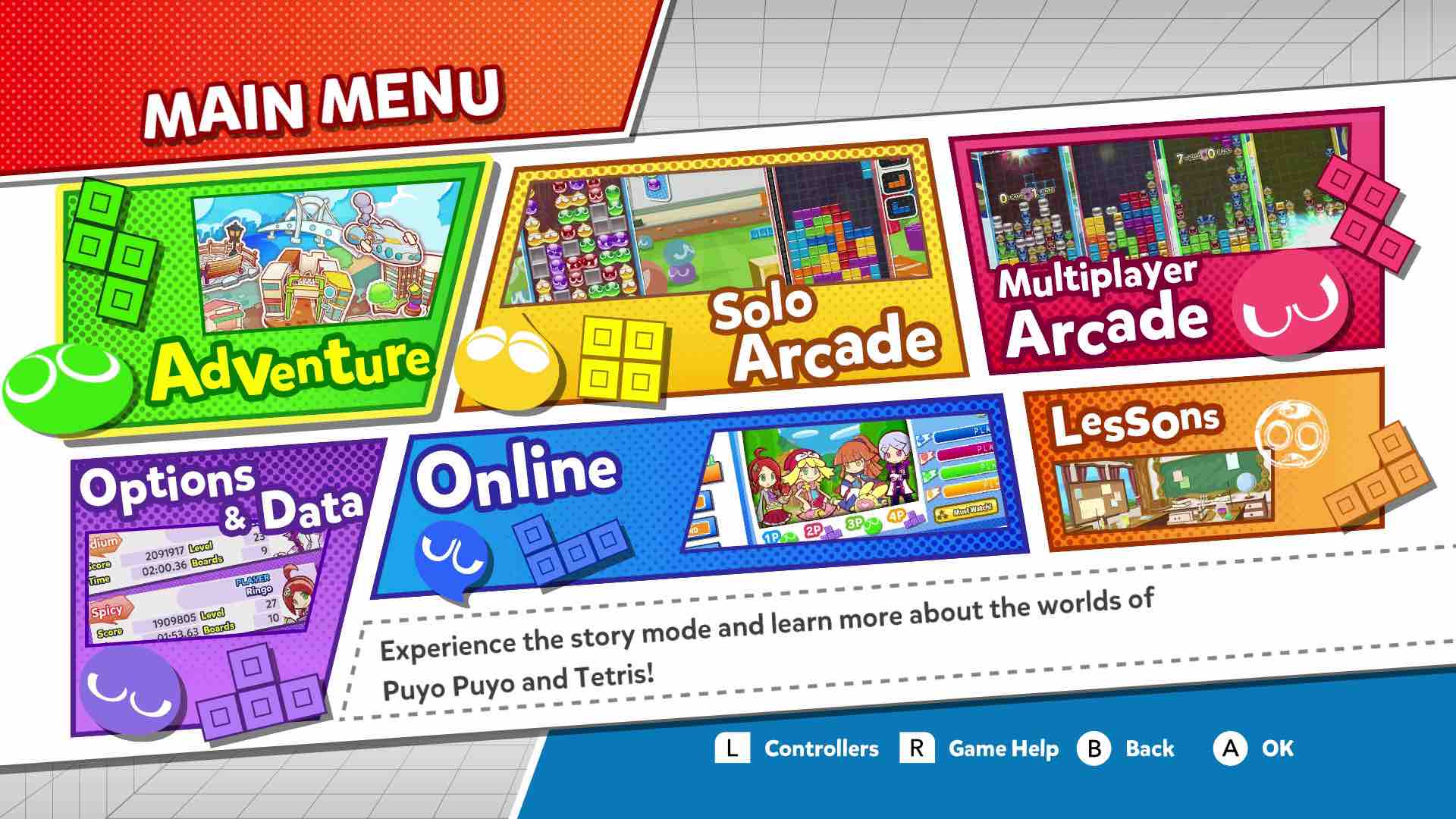 If you don’t know your Puyos from your Tetriminos or generally want some guidance before the chaos begins, developer Sonic Team has you covered. It may be easy for Puyo Puyo Tetris to chuck you into a Puyo Puyo, Tetris or Fusion match, but there are optional Lessons that await you on the Main Menu. This will let you learn how to play Puyo Puyo, Tetris or Puyo Tetris Fusion, with Beginner, Advanced and Expert lessons teaching you basic controls and rules before moving on to more advanced techniques such as learning how to effectively stack Puyos so that you can score Chains.

Once you feel confident about your road to victory, there are multiple ways that you can spend your time. Those that are seeking solo play can turn to Adventure mode, an intergalactic saga with ten acts that sees characters from the Puyo Puyo universe unexpectedly teleport aboard the SS Tetra. With a script packed with comedy, you will conquer multiple stages that steadily help to familiarise you with both Puyo Puyo and Tetris as the story unravels. I was perfectly content to sink hours into the mode, and, while the characters aren’t particularly memorable, their interactions and the dialogue that they spew certainly is. 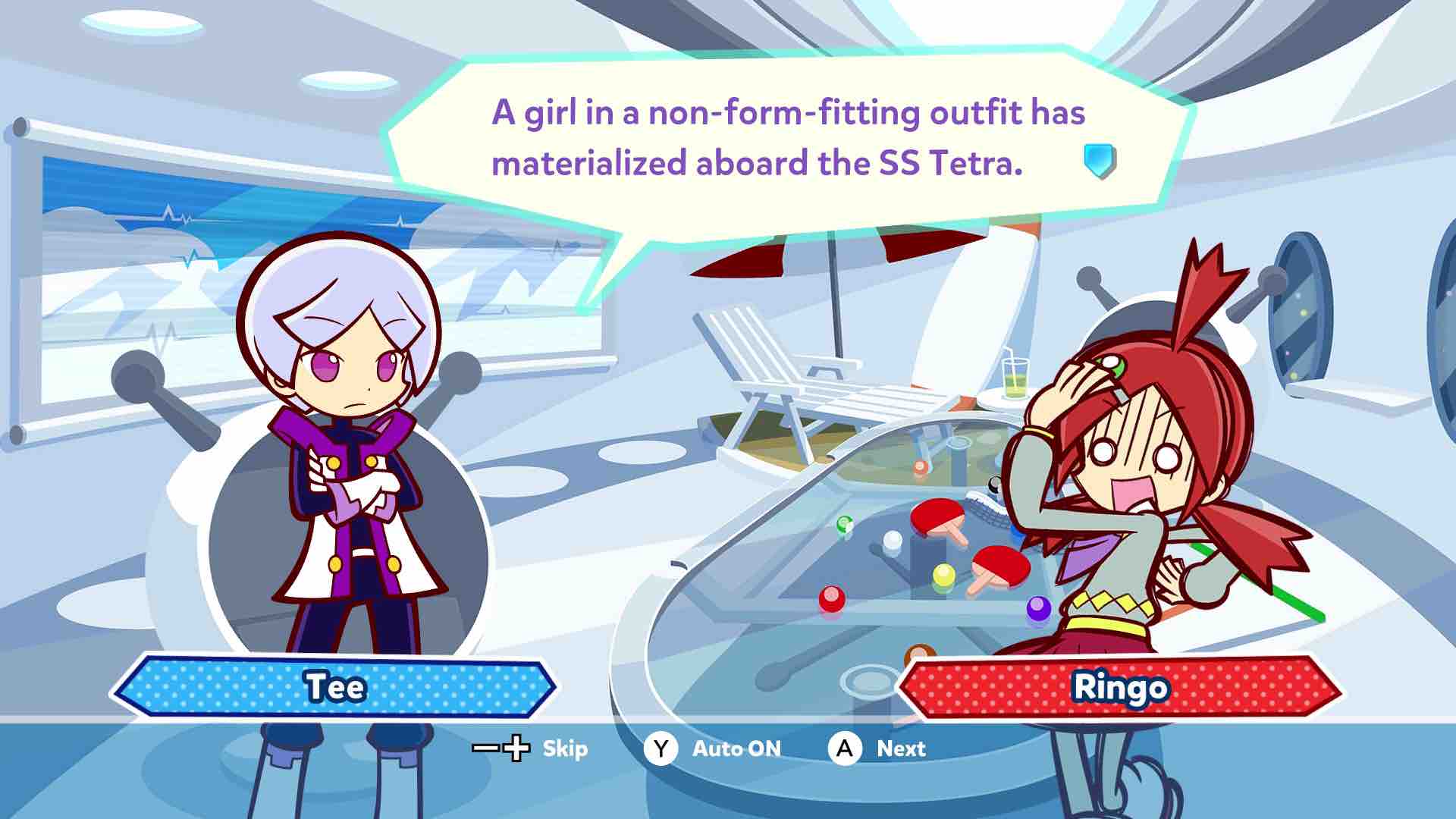 Other than that you can dive into Solo Arcade or Multiplayer Arcade, the difference between them either seeing you take on the CPU or up to four local players.

There are several modes that pack plenty of variety: the classic Versus mode, that sees you take each other on in either Puyo Puyo or Tetris; Swap, where you switch between both Puyo Puyo and Tetris at set intervals; Fusion, which blends the two puzzlers into one particularly brain-bending concoction; Big Bang, that sees you race to outpace your opponent in rounds to pummel their health bar into submission; and Party, where players can compete in either Puyo Puyo or Tetris but items are thrown into the mix to throw your concentration.

When playing alone, each mode can be played in either Battle or Endurance game types. That will let you simultaneously challenge up to three CPU opponents or take on increasingly difficult opponents until you suffer defeat. There is also a Challenge mode that is slipped in here, that presents more quirky takes on each game that includes Endless Fever, Endless Puyo, Tiny Puyo, Sprint, Marathon and Ultra. 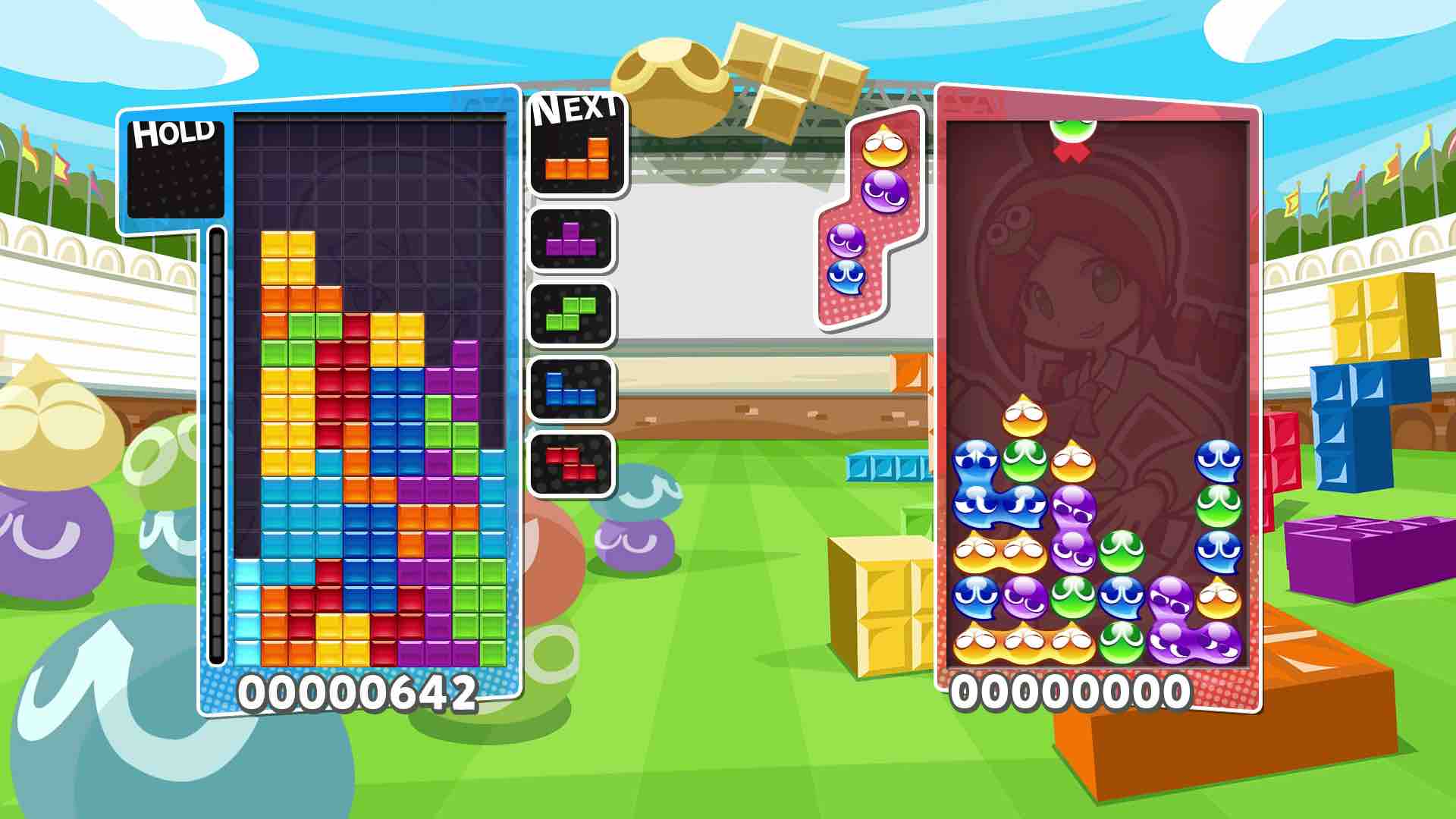 If you want to battle it out against players around the world then Online adds Puzzle League and Free Play to occupy your time with, while also presenting a chance to watch saved or uploaded replays to learn from others with far quicker reflexes than I will ever have. Puzzle League is a ranked mode that matches you against another player where each win and loss has an impact on your ranking, which starts at the lowly Puzzle Squire. While Free Play will let you either join or create a room in which you can pick the rules that you want to play with – with a Join Friend option opening a welcome route to join those on your Friend List. It has been particularly quick and snappy to find matches, even if I was completely annihilated on more than one occasion.

That’s when it all comes together to become an outstanding puzzle package that energetically plays around with what we have come to expect from both Puyo Puyo and Tetris. Neatly presented, kaleidoscopic in colour and with no noticeable performance hiccups, there is a clear passion for puzzles that shines through in what Sonic Team has created.

Puyo Puyo Tetris is a puzzle masterpiece. Ideal for short bursts and extended sessions, it comes alive when other players join the riotous puzzle fray. Packed with content, prepare to become addicted.