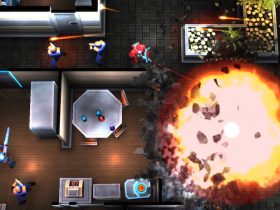 Shoot Through Walls In Neon Chrome On Nintendo Switch Next Week

Damas y caballeros! The indie scene’s most famous Luchador has made a surprise entrance with a rooster punch through the ropes and a bodyslam onto the Nintendo Switch. While it was only a matter of time until señor Juan Aguacate would strap on his Lucha Libre mask on the hybrid console other than Super Smash Bros. clone, Brawlout. Nobody would quite expect him to drop onto the 6.2-inch canvas unannounced and completely out of nowhere. Well, here he is, ready to embrace Mexican waves once again as this critically acclaimed Metroidvania wrestles its way through the noise in a pumped-up rendition of his 2013 debut.

Keeping in line with the spirit of its subtitle, Guacamelee! Super Turbo Championship Edition brings with it new and improved gameplay features compared to the original game including new area’s seamlessly entwined into the story, an extra boss battle, tweaks to the overall gameplay and a cool new INTENSO! ability to go haywire with. If you are like me and missed out on this Mexican lore-inspired adventure, then you will be none the wiser yet certainly still in for a treat. That is, of course, if the whole Metroidvania fatigue hasn’t quite kicked in enough for you yet.

It’s fair to say that the Nintendo Switch is rampant with various representations of this popular genre. Guacamelee! Super Turbo Championship Edition can at least hold its head high enough to boast as one of the more earlier homages to this particular corner of the indie market. Or, at least, a reprisal to a popular gameplay style that has lead the way to the modern Metroidvania indie boom. While the original game is pushing past being half a decade old at this point, the gameplay and visual flavour still stand up strong enough to separate itself and stay in line with the reputation that it has built over the last few years. 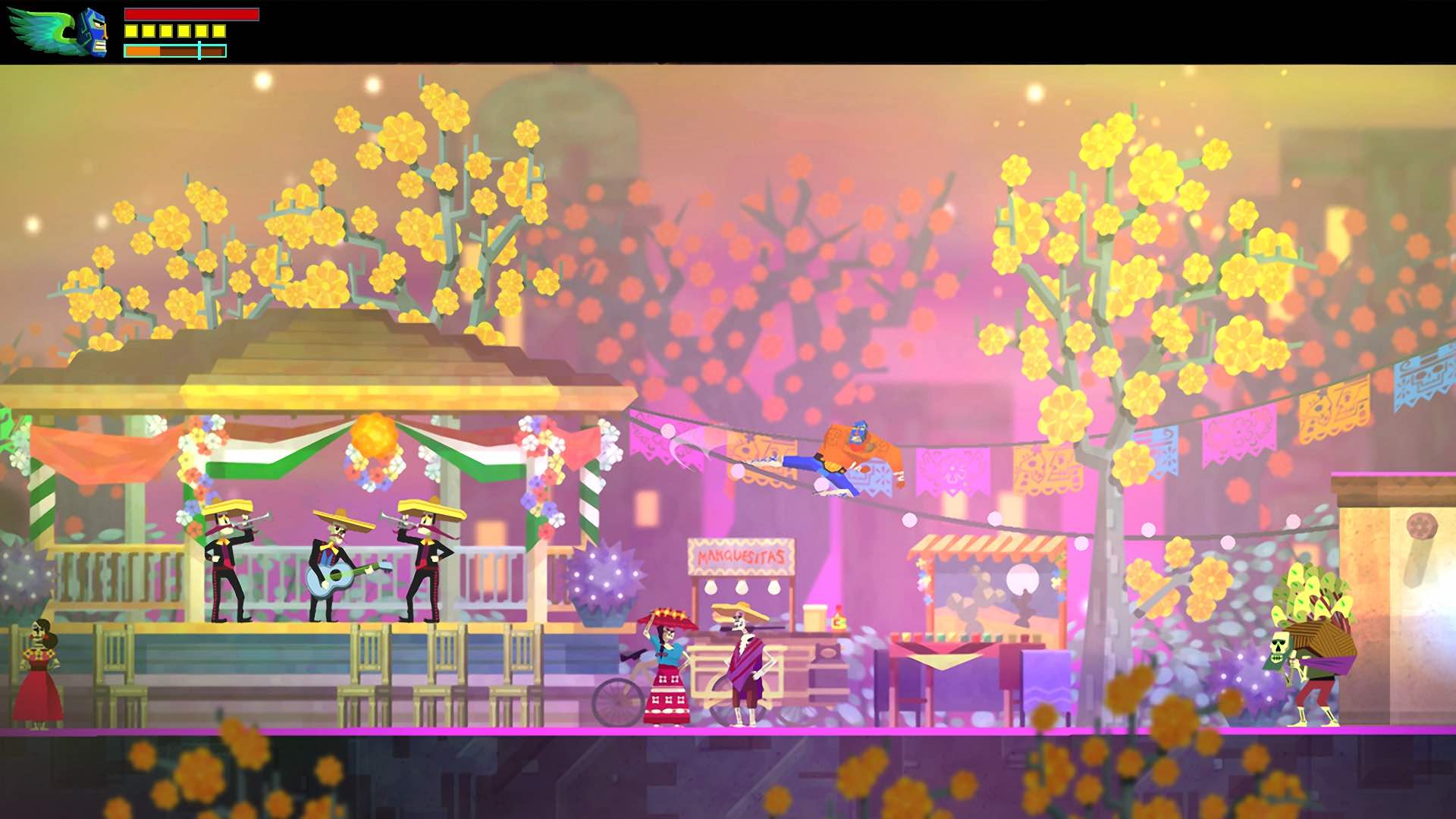 For those that have no idea of what Guacamelee! Super Turbo Championship Edition has to offer, then think of the 2014 animated movie Book of Life (or Disney Pixar’s Coco if you prefer) blended with Samus Aran’s previous adventures with a pinch of Bayonetta seasoning. The whole Day of the Dead tradition is heavily sewn throughout the adventure in a way that aids the gameplay with its culturally unique art style. While the gameplay itself does lean quite heavily in all categories above, the synchronicity on how they all roll together concludes towards a wonderfully crafted seven-hour experience.

The overarching structure of the open-ended world spreads out pretty much as you expect. Unreachable areas require a new ability to access them, with each obtainable upgrade progressively rigging out Juan’s robust skill set. What separates the whole Metroidvania layout from the norm are the small villages that somewhat divide the dangers in an almost Zelda II: The Adventure of Link-like manner. Villagers will ask plenty of favours from you, while the more action-oriented sections more entwine towards a sort of Hylian dungeon formula.

Where the heart and soul of the adventure truly lies is within Juan’s combat potential and ever-growing move list. The core combat itself is simple, but practical consisting of an attack, grapple and a dodge action to keep enemies at bay. However, every upgrade obtained through the journey can lead into some seriously satisfying combo potential that will keep Juan juggling enemies in the air for days. Once a marker pops up above a friend’s head, you can show off your wrestling skills by launching your formidable foe smack bang into another to keep the chain going strong. The new Super Turbo feature in effect, known as “INTENSO!,” sees you going berserk when its dedicated meter fills up and is unleashed. Think the astronaut out of The LEGO movie finally being granted the chance to build a spaceship kind of berserk. (“SPACESHIIIPP!!”) 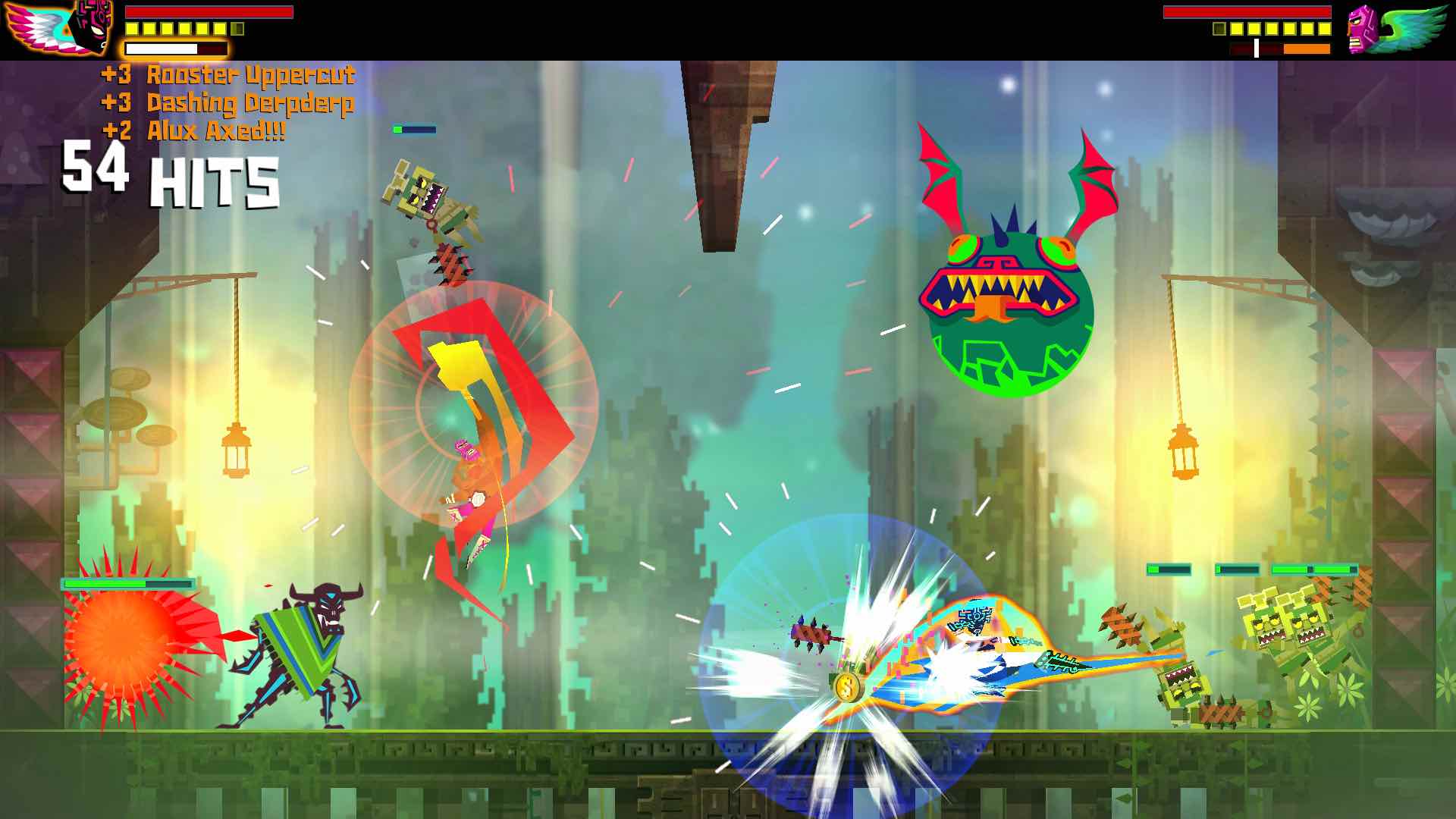 While your upgrades work as a handy aid in combat, the main use for them sets up some excellent level design. While I’m not going to go into detail of what each perk does to spoil any surprises, what I will say is that combining each of them together makes for some rather interesting performing and exploration. Certain ways and angles that ledges are placed can seem impossible to get to, needing a flair of acrobatics and coordination in order to reach them that feels like a combo execution within itself. This all leads to a highly imaginative endgame where you will put all that you have learned to the test, and one that is certainly tricky to venture into but that lead me to smile and nod in appreciation to its design.

With that said, the early portion in Guacamelee! Super Turbo Championship Edition can feel a bit too familiar if you have recently played games of a similar ilk. Thankfully, ability progression rides at a frequent enough pace, drawing my interest further into the world consistently enough to soon feel constantly compelled by what it all had to offer. The music and art style is superb, the lore that influences the story suits its visuals perfectly and the controls that bind it all together are as sharp as a Mariachi band guitar pick. It may not be the longest Metroidvania out there, but it sure is still one of the finer examples even by today’s standards.

There’s also a multiplayer element where up to four players can brood up for some co-op carnage. Despite efforts made to try and steady out the inevitable chaos that comes with squeezing in such a feature, it predictably doesn’t work out quite as smoothly unless you’re just in it for a laugh. Unfortunately, simply dropping in and out of the action can become a hassle as there doesn’t seem to be an easy way to do it. Even if you disconnect a player’s controller, the game pauses and urges you to reconnect them to keep the gameplay going. I would have to resort to hopping back to the main menu if I wanted to carry on without a team. Unsurprisingly, due to the fact that every button on the controller is put to use, you are unable to split a Joy-Con pair to hand one out to each player. So, if you do want to delve into some dream team action, expect the need for multiple pairs for the privilege. 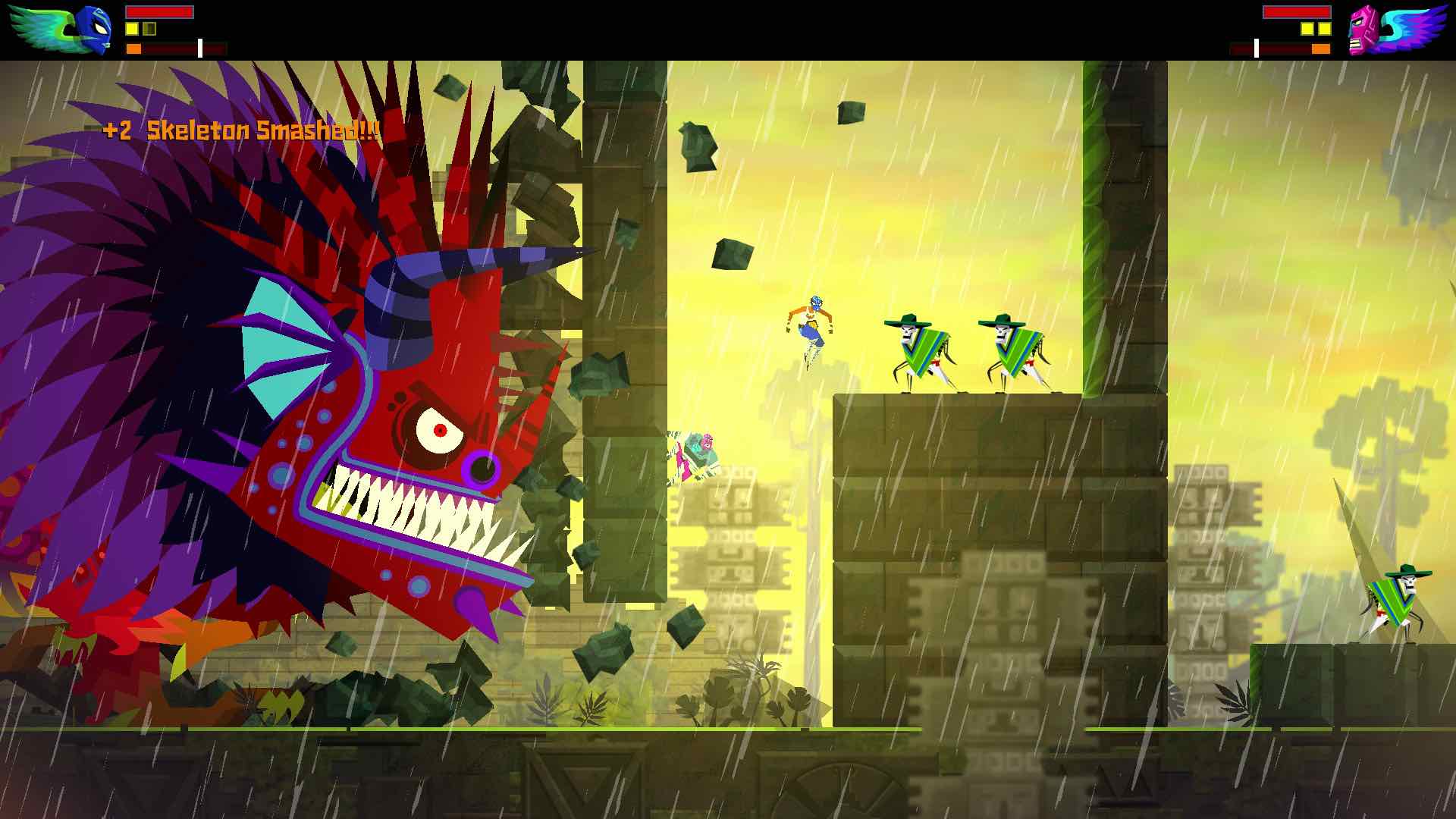 For the core player, there is more gameplay mileage to be had if you want to keep things going a few hours longer. Each of your meters can be upgraded similar to the way that you would find extra missiles in the Metroid series, with collectables also being important if you want to see the true ending. One thing that I would like to have seen is some sort of extra score survival mode, as the combat is certainly strong enough to tailor for it. Considering that the game does support multiplayer functionality, an inclusion of a versus mode could also have been a great addition as well.

With the original release being supported on PlayStation Vita, this Day of the Dead adventure isn’t a stranger to portable play. Guacamelee! Super Turbo Championship Edition works as nicely as fans would have hoped it would in handheld, albeit a little cloudy around the edges in slight reminiscence to a Mexican soap opera. Dock the game to the TV and the colours pop out much more vibrantly thanks to the 1080p output advantage. Regardless, it’s still a gorgeous looking game however you decide to play it with no slowdown or stutter of any kind.

If you have not yet had the chance to dive into Guacamelee! Super Turbo Championship Edition, then there’s probably no better way to do so than on the Nintendo Switch. The £11.99 price tag won’t break the bank for what is a worthy melee-oriented Metroidvania complete with plenty of references to some of Nintendo’s finest IP’s. If you do happen to make it to the final stage, just listen out for a certain jingle sewn into the music. It contains a cool underground 1:2 beat to it that can’t possibly be overheard.