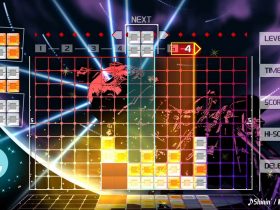 With no word as of yet on a Nintendo Switch version of Super Smash Bros., it’s down to the talent of the indie scene to scratch that platform fighting itch. The first title to show its face arrives in the form of Brawlout from Angry Mob Games. The question is, will it fill the gap until the inevitable is released?

Taking on a genre like this is never going to be easy. In fact, being the newcomer in the fighting arena, in general, can usually be a steep uphill battle. What makes things even harder still is that, no matter what, it is always going to be compared to the monster that influenced it in the first place – especially if that beast has the biggest icons of gaming legends wrapped up under its wing, along with a fighting system already favoured among the competitive gaming scene. Personally, I’m more surprised that a dormant fighting system similar to Power Stone doesn’t get resurrected more. After all, it is easier to compete with a respected but dead franchise than it is to tackle the tyrants that already rule the land.

As I’m sure you’ve already noticed, Brawlout is a 2.5D arena fighter very much akin to the Super Smash Bros. franchise. You battle it out with up to three other opponents with the aim of knocking each other out of the screen. Each fighter has a percentage meter that starts with zero and gradually increases when taken damage. The higher the percentage, the further you get knocked back. 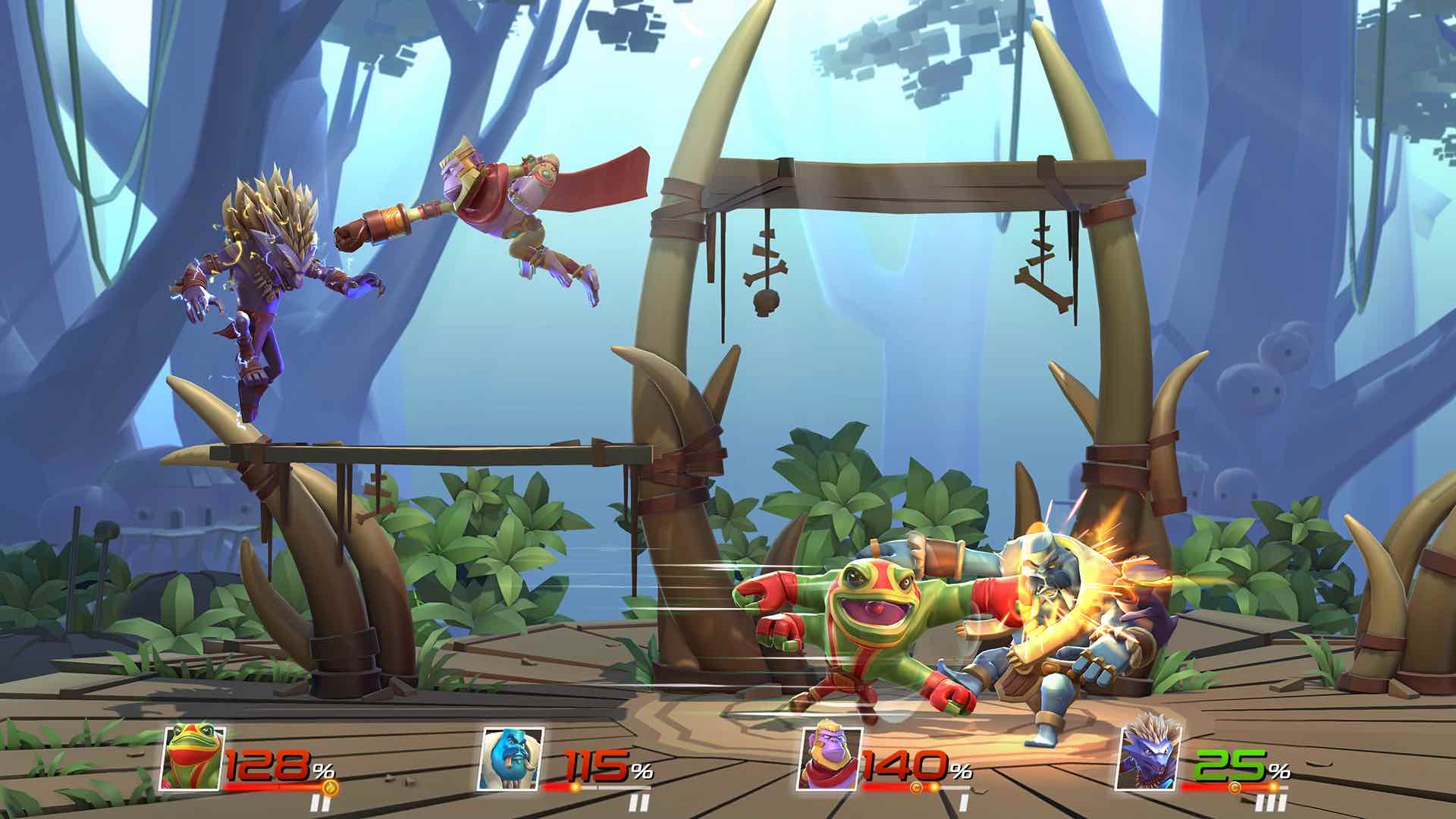 Those that are familiar with Super Smash Bros. will take to the button layout easily, as it is virtually the same as Nintendo’s mascot brawler. You have both a normal and special attack that changes properties depending on if (or how) you lean the stick, while jumping can be done with either up, or the X and Y buttons. Brawlout also borrows the Smash Attack to send your rivals flying, and tapping your stick twice will allow you to sprint.

There are a few differences, however. Unlike Super Smash Bros., Brawlout relies more heavily on the dodging mechanic to evade attacks. This is because there is no actual block of any kind to defend yourself with. To stay within balance, characters are unable to throw each other unless they have grapple properties to allow it. This, in theory, keeps the momentum moving at a constant pace, even more so with an easier way to execute wavedashing (more on that later).

Most of the relatively small cast in Brawlout are pulled straight from the animal kingdom. Take King Apu for instance, a Simeeran ape that dons a far-reaching whip to beat down his enemies with. Then there’s Olaf Tyson, a fierce walrus accompanied by a penguin with an uncanny resemblance in moves to Lord Fredrik – the final boss from Donkey Kong Country: Tropical Freeze. You also have two guest characters joining the fray with the main protagonist from Hyper Light Drifter, as well as Mexican wrestler Carlos Calaca taking a break from Guacamelee! Super Turbo Championship Edition. 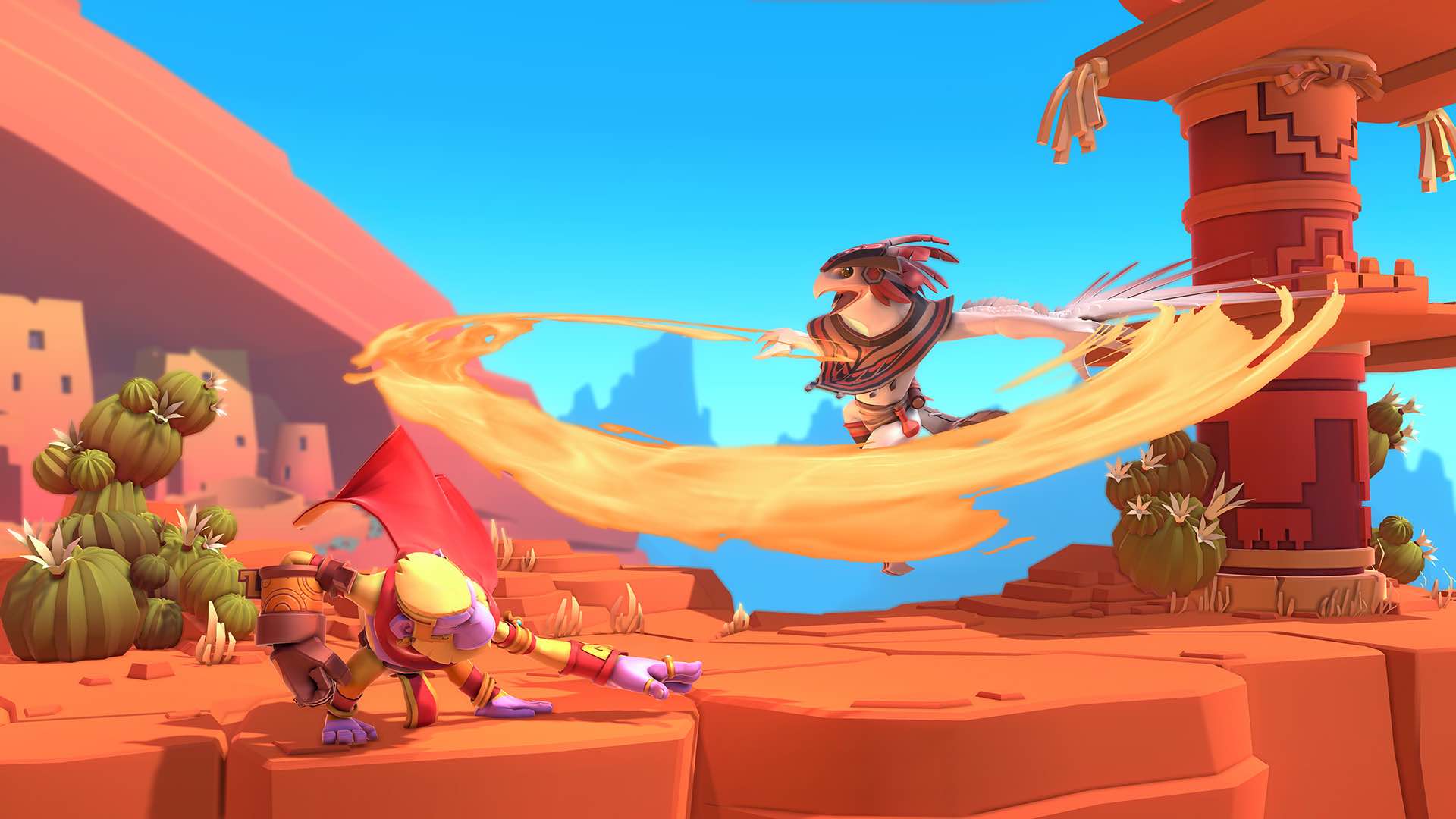 Each of the characters varies in their style of combat, although it’s clearly evident that a lot of attacks have been copied and pasted from the Super Smash Bros. move list. While this isn’t necessarily a bad thing in the sense of keeping things familiar, it does push the case towards the lack of imagination that this party brawler possesses. The character design also feels a bit generic, as they look very much like Skylanders in the form of the Disney Infinity toys. They’re not visually bad by any means, there’s definitely polish to them and their animation in combat does look pleasingly fluid. It’s just that they’re a bit forgettable for the most part. It also probably doesn’t help that all the unlockable characters are pretty much re-skinned variants of the stock roster.

Coins and gems are the two types of currency you unlock content with. Coins are much more common to find as you receive them with every brawl. Gems, on the other hand, are much rarer to come by. These are used to unlock extra fighters and stages which are obtained by levelling up your character with experience. You can also earn gems by fighting through the single player and completing daily challenges. This is all done by opening up pińatas by using your spoils to get new skins, taunts, and various other cosmetics.

While unlocking items isn’t exactly a new feature in fighting games, Brawlout shares similar traits with games like Street Fighter 5, in which you can slowly earn your prize. While Brawlout has no DLC as such, the way it’s slowly paced feels very similar to games that are riddled with it. This makes gaining new characters a bit of a chore, even more so due to their strong similarities of the primary cast and the want for new stages. 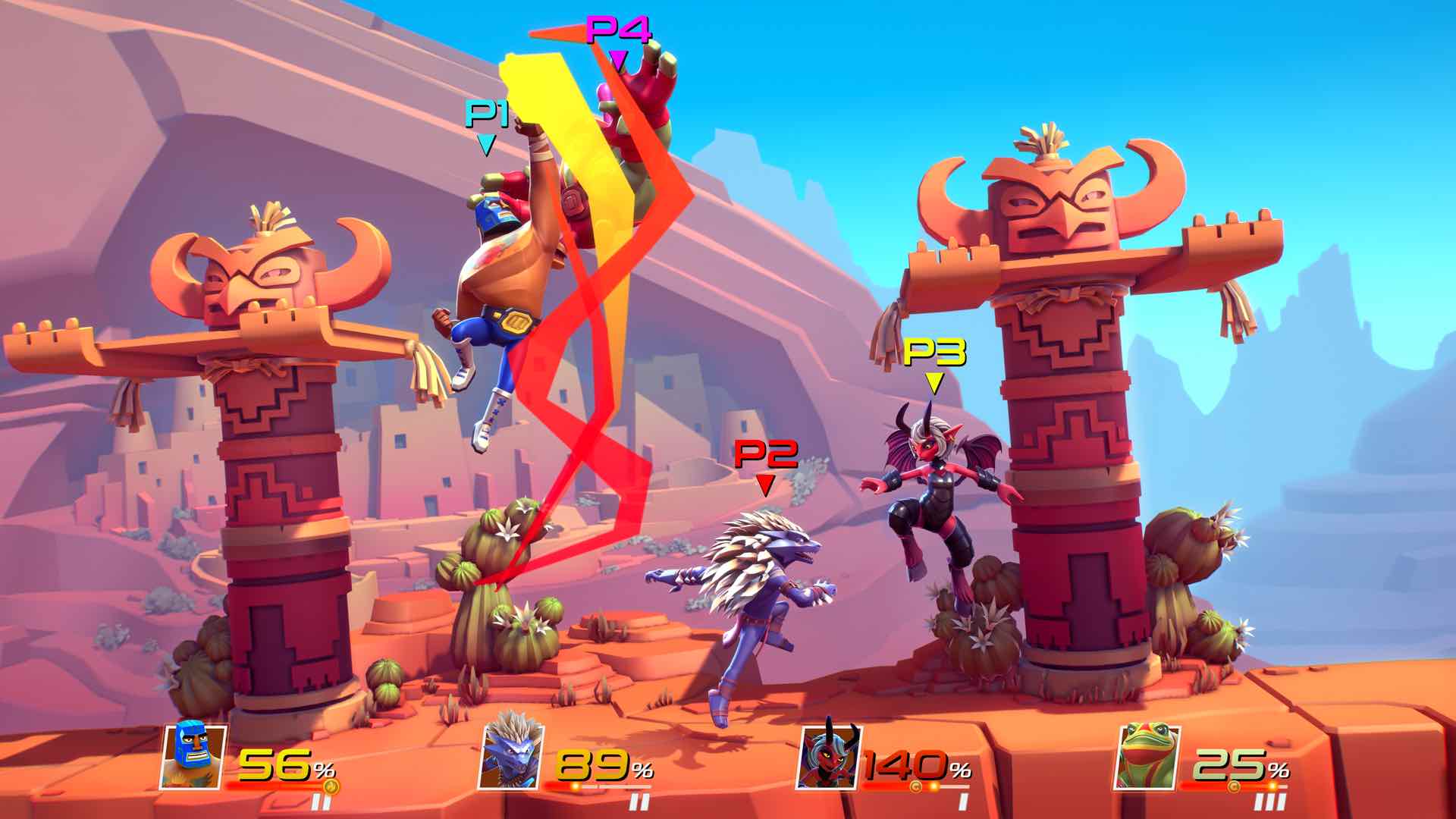 Something that I found misleading was the menu screen to spend your earnings. They are thumbnailed in a way to look like a ton of extra modes, when, in fact, they just lead you to the same optional purchase screens with various backgrounds. It makes purchasing unlockables look disingenuously messy, and overall quite pointless in the presentation.

However, what matters the most is how well it actually plays. As you would probably imagine, it plays a bit like Super Smash Bros., with few missing (some of which are pretty important) mechanics to try and separate itself in an effort to be different. That’s not to say it isn’t fun, because it is. The action is mostly fluid and as chaotic as you would want a game like this to be. It’s the complete lack of originality that lets it down. However, it does make a decent attempt to look good and aims to confine itself within a tournament level setting. The stages stay flat with the odd floating platform, keeping in line with competition level Super Smash Bros. rules. Also, you can modify your game with either stock or timer for those who were wondering.

You can see that Angry Mob Games are leaning more toward the Super Smash Bros. Melee variant in the series by implementing the accidental wavedash mechanic. You see, for those who don’t know, wavedashing is an evasive move favoured by professional competitors based on an exploit found in the GameCube brawler. It’s also what has kept that particular competitive scene burning for so long. Brawlout opens its arms to small traits such as these by making them much easier to execute. 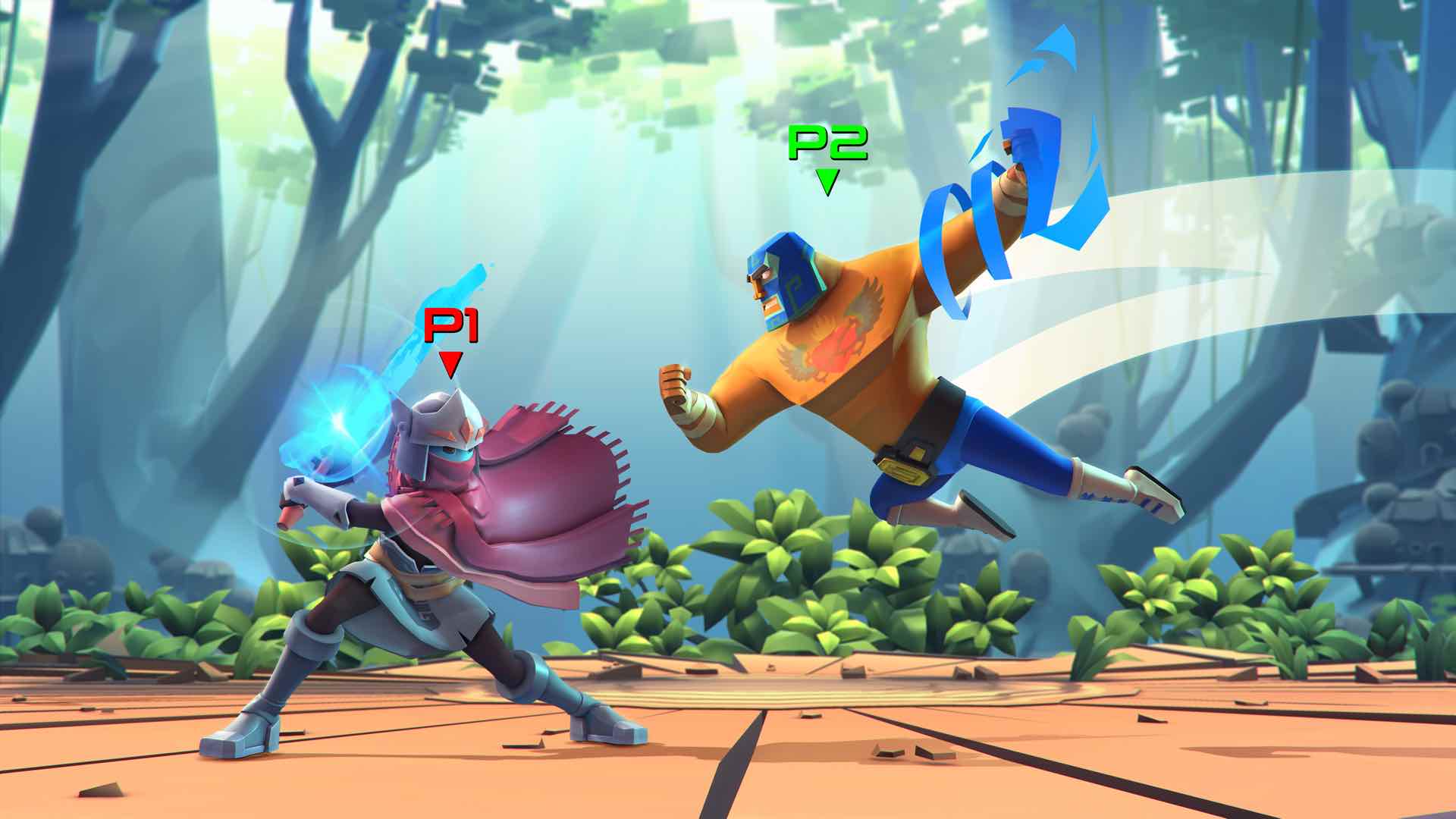 Brawlout‘s own donation to the formula comes in the form of a rage meter. When taken damage, this meter gradually fills up. At the halfway mark you can break your opponent’s combo, or you can wait to fill it up all the way to activate a brief rage mode. When in this state, your knockback properties are reduced and your damage output increases. It works quite well as a good comeback mechanic to hype the drama of turning the tables.

In regards to game modes, there’s a single player Arcade option where you climb a Mortal Kombat style tower to challenge your opponents. These are split into three difficulties. The easy tower faces you with one opponent, while the hard tower has you facing three at once. The AI is pretty terrible but relentless and always on the constant attack, so much so that they usually follow you off the edge to their own doom. The online modes allow you to set up matches with mates or face strangers eager for a fight. I purposely delayed my review to see how the servers would hold up on day one and despite getting matches thick and fast, every fight was a sluggish mess. Hopefully, this will get sorted sharpish. The lack of having a ranked and casual mode at launch is also pretty disappointing.

Visually it all looks sharp and clean running at 60fps both docked in TV Mode and Handheld Mode. The resolution hits 1080p on the TV too, keeping it looking vibrant throughout. There are a few minor stutters mainly when playing against AI but I’m positive a patch will arrive to sort that pretty soon. The music matches the action well, accompanied by a catchy main theme tune although it would be nice to see more variety.

Despite a few gripes, Brawlout doesn’t feel like a pound shop Super Smash Bros. title. Considering it has been created with an obviously smaller budget compared to other games in the genre out there, it also doesn’t do a bad job of what it’s trying to replicate. Its considerable lack of originality is unfortunate, and because of this, I doubt that it will ever really stand out. But, with promises of support to evolve Brawlout in the future, as well as sailing across the multi-format market, I’m sure it will satisfy a small niche of competitors. At least I hope it will, anyway.