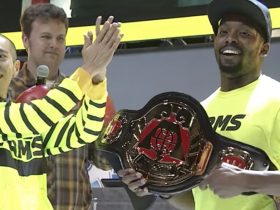 I didn’t think I could possibly be scared of Alien Isolation when played on a small screen. Yet there I sat, in bed, in the dark, creeping along corridors leaning around corners finding myself face to face with the Xenomorph. It hadn’t seen me, luckily. I backed up to where I came from, knowing there was a locker I could hide in.

Yanking it open, I threw myself inside and angled my view towards the main door of the room. It slid closed and I breathed a sigh of relief. Pulling out my scanner – faithful to the movies – I watched as the ping moved towards where I was hiding. I could hear the Xenomorph in the ceiling, so I took my chances to move on. In mere moments, a clatter rang out behind me and before I could turn back, a spiked tail was thrust through my abdomen, my hands spread outwards pleading to someone or something.

I was scared. All over again, I should note, as I’d already played Alien Isolation. It mattered not that I’d faced off against the Alien from the titular movie and I’d struggled with the androids who took security very seriously on the space station, Sevastopol. I jumped out of my skin, I clenched my jaw as I tiptoed past sentries and I panicked often. So, yes, Alien Isolation still holds that fear, even in handheld.

Alien Isolation takes place after the events of the first Alien film. Fifteen years after, as we take the role of Ellen Ripley’s daughter, Amanda. As Amanda learns that Sevastopol holds details of her mother’s disappearance, she fixates on finding that evidence and discovering what happened on the fated Nostromo.

For those looking for an action game centred within the Alien franchise, look elsewhere. Action takes a back seat to slow-paced adventure. Stealth and cunning are required when dealing with an enemy who factors those exact skills in their arsenal. The Xenomorph creeps around the station leaving corpses in its wake. Blood splatters indicate danger, distant air vents show the fractional movement of a tail as it slips above you and out of sight. And it’s not just the Xenomorph which presents a danger to Amanda and what’s left of her initial crew – humans have gone mad, androids have gone rogue.

Using only what you find around you, the hunt for answers is of the utmost importance. Thankfully Amanda is an engineer and she uses blueprints found through Sevastopol to create smoke and pipe bombs, noise emitters and medical injectors. Of course, the latter is useless if the Alien catches you. Crafting these items don’t need a workbench and can be crafted on the fly, as long as you have the components needed, which are also found scattered around.

Sevastopol is a dark hive of mutiny and danger, labyrinthine in layout, yet never looking overly familiar. I’d be lying if I said the space station wasn’t a maze of corridors and cubbyhole rooms, but the design of these are genius. The corridors vary enough to ease and fatigue of overly familiar settings but stay closed in and claustrophobic enough to instil panic and fear when exploring. There are air vents to crawl through, cupboards to hide in and you can even scurry around on the floor and keep watch from under beds and tables.

Each enemy has a tell-tale noise or presence which, once learned, keep the level of fear high. Humans are noisy and chaotic, Androids are slow-paced with burning white eyes and the Alien, well, you’ve probably seen the films. If you insist on being one of the noisy humans, there are guns to use but they should always be a last resort and the game insists on that. Even on the easier difficulties, enemies can one-shot kill you. It’s best to be sneaky and the stealth works, with the controls allowing for incremental movement and even leaning out from around cover slowly.

The most important thing here should be noted as the tension felt throughout playing. There’s always a sense that one false move will see you dead and starting from a nearby save point – saving is manual and done through map terminals – it’s a wonder that the feel of the movies has transferred so brilliantly. Especially to handheld, where the graphics are sharp and detailed to the point where I had to remind myself that I was playing on a Nintendo handheld console. Everything does a great job transporting the player to this far off point in space, grounding them in danger and mystery, giving the player the tools needed to survive but an almost sandbox way of finding the solutions.

The story itself could be forgettable, taking second place to the mechanics and ‘action’ of the game, but each NPC and hacked computer adds an extra layer to not only Amanda’s story, but to the universe of the franchise. Rarely do I hunt out terminals to read emails and reports from faceless characters, but here, each screen of text added to the journey.

Alien Isolation isn’t just a fantastic game, it’s also a fantastic port, a must-buy for owners of the console, even if you’ve played the game previously.