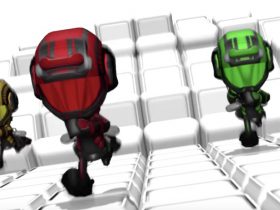 Whether that be the moustachioed mascot’s lack of belly button, if Toad’s head is a hat or its actual head, the love triangle between Mario, Peach, and Pauline, or why there are coins randomly hidden in out of reach places, we’ve written out his answers to each question below.

Why Does Mario Have Nipples, But No Belly Button? (And Did You Expect Fans To Have This Kind Of Reaction To The Reveal?)

“So, we’re jumping right into that question, are we? [laughs] Well, to be perfectly honest, I didn’t really expect that to be a topic among fans. Once I heard that people were talking so much about Mario’s belly button, it made me start to think about whether we should revisit the topic on the design side.”

Is Toad’s Head A Hat Or A Head?

“So that, as it turns out… is actually Toad’s head. I’m going to have to leave it to all of you to figure out exactly how that works out. Maybe there’s something inside…”

Is There Anything In The Game That You Thought Fans Would Easily Find That They Maybe Haven’t Found Yet?

“Well, we made the game so this thing could eventually be found, so I don’t want to spoil anything for the fans who are still playing it.”

Can You Describe Mario’s Relationship With Peach And Now, Pauline?

“I would appreciate it if we could respect the privacy of those three at this time. [laughs]”

How Did You Choose Which Elements From Other Games Were To Be Featured In Super Mario Odyssey?

“So, it’s not just Super Mario 64, but there are a lot of other different previous Mario games that we discussed with staff on how we can bring up interesting nostalgic callbacks from. But because Super Mario 64 is very important as kind of a spiritual predecessor to the concept of 3D Mario games, I think we went particularly heavy on elements from that one.”

What Is Your High Score For The Volleyball Activity?

“Volleyball? Hmm… I had to really work hard to get the Power Moon for 100 on that one, but I was finally able to do that one, just barely.”

Who From Your Team Would You Say Is The Fastest At The Koopa Freerunning Activities?

“There’s one person on the programming team who I think was better than all of us when we were working on the game, but since the game’s released and there are scoreboards out there I’ve seen people who have far surpassed even them.”

There’s A Lot Of Uncharted And Hidden Areas Where Fans Are Finding Coins. Was It Hard For The Team To Final All These Areas Or Was It Fun?

“Over the course of development, there were moments where the debugging team reported being able to reach certain unexpected areas, and so the designers sort of went off those reports to put coins in such places, to pay their respects for the testing team. The number of such places grew and grew so this was quite a challenge for the designers, but overall it seemed like a fun experience because people were able to find new areas they could explore.”