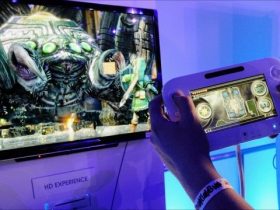 Another day, another comment regarding the Wii U’s graphical prowess from an anonymous source.

Whilst Nintendo’s new home console may be capable of high definition graphics, it won’t match the Xbox 360 or PlayStation 3 apparently.

“No, it’s not up to the same level as the PS3 or the 360”, stated a developer who has been working with the Wii U. “The graphics are just not as powerful”.

Such comments were shared by another developer, speaking under anonymity, who shared: “Yeah, that’s true. It doesn’t produce graphics as well as the PS3 or the 360. There aren’t as many shaders, it’s not as capable. Sure, some things are better, mostly as a result of it being a more modern design. But overall the Wii U just can’t quite keep up”.

It is widely understood that Nintendo will be torn between the inclusion of more advanced technology, or to ensure that the console will be able to hit retail at a more affordable price.

Its tablet controller is also seen as the innovation and the key selling point of the Wii U, yet according to developers there are issues with this.

“The whole thing about the tablet controller is that you only get one of them, and you can only use one and it’s not completely independent”, the anonymous source discussed. “The base console has to be on, and you have to be in range.

“Other controllers are just Wiimotes, or other Wii controllers. They may change the form factor or looks a bit, but it’s the same controller”.