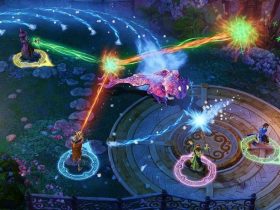 The Nintendo eShop for Nintendo Switch has become an increasingly competitive battleground for independent developers, and, while there are enough classic platformers and puzzlers to busy yourselves with, there are other genres that are largely untouched.

VooFoo Studios has looked to make their mark with Mantis Burn Racing, an action-packed top-down racing game that looks to combine real-world physics with intuitive controls as you sit behind the wheel in five vehicle classes and compete in an 11-season career.

With four-player local split-screen racing and online multiplayer options for up to eight players with cross-platform support, we certainly enjoyed the chance to engage in some heated competition in our Mantis Burn Racing review and had the chance to speak with Sean Walsh, marketing and PR manager at VooFoo Studios, about the game.

Nintendo Insider: I wondered whether we could start by talking a bit about yourself and VooFoo Studios?

Sean Walsh: I’m Sean Walsh, Marketing & PR Manager over at VooFoo Studios. I started out in the games industry at Empire Interactive back in 2007 working as a Product Manager on titles such as FlatOut, Ford Racing and Cricket Captain. I’ve been fortunate enough to work with many talented people throughout my career at fantastic places like Disney Interactive and Bandai Namco Entertainment.

Right now I head up the Marketing and PR department at VooFoo, which as both a games developer and publisher, has allowed me to experience yet another facet of our hugely varied and creative games industry. VooFoo Studios is a small, but growing, Birmingham based video games developer that has recently moved into publishing.

The studio was formed in 2007 with an ambition to create fun, best-in-class games and we’ve released games on every major gaming console, PC and mobile. We’ve probably been best known for developing Hustle Kings, which we first released back in 2009 with Sony and the ‘Pure’ series of games, Pure Pool, Pure Chess and Pure Hold’em, which have all been incredibly well received both commercially and critically. Last year we released Mantis Burn Racing our first self-published game, which is out now on Nintendo Switch!

NI: I believe that VooFoo Studios opened its doors a decade ago. How have you seen the industry change in that time, and what, if any, new challenges are you facing today?

SW: The games industry has changed so much in the past 10 years, it’s almost hard to quantify. What we can say is that we’ve seen the market for games growing bigger and bigger, year on year, globally and we’ve seen ways in which the very definitive of a ‘gamer’ has changed. In 2017 pretty much everyone can call themselves a gamer in some shape or form and that brings fantastic opportunities as well as challenges for companies like ourselves. The games industry is incredibly innovative and dynamic with new consoles, technologies, business models and store-fronts emerging at a fast-pace, one of the key challenges for us is keeping up with those changes, remaining agile and recognising what opportunities are right for us to take advantage of.

NI: Moving on to Mantis Burn Racing, how did that project come about? It stands apart from the other games and genres that the studio has worked on.

SW: Whilst Mantis Burn Racing is a departure from the kind of games we’ve been known for up to now, it is, in fact, a genre that we’re very familiar with. Mark Williams, the founder of VooFoo Studios, first worked on a top-down racing game called Max Rally back in 1998 and it is a genre he always wanted to return to. With Mantis Burn Racing we set out to make a game that would really stand-out in the genre, both from a visual and gameplay perspective. We knew making a top-down style racing game would afford us the capacity to apply our trademark visual fidelity to a genre which we believe has been under-represented in recent years. It is a genre that we believe many gamers still have a passion and appetite for and thankfully we’ve been proved right. 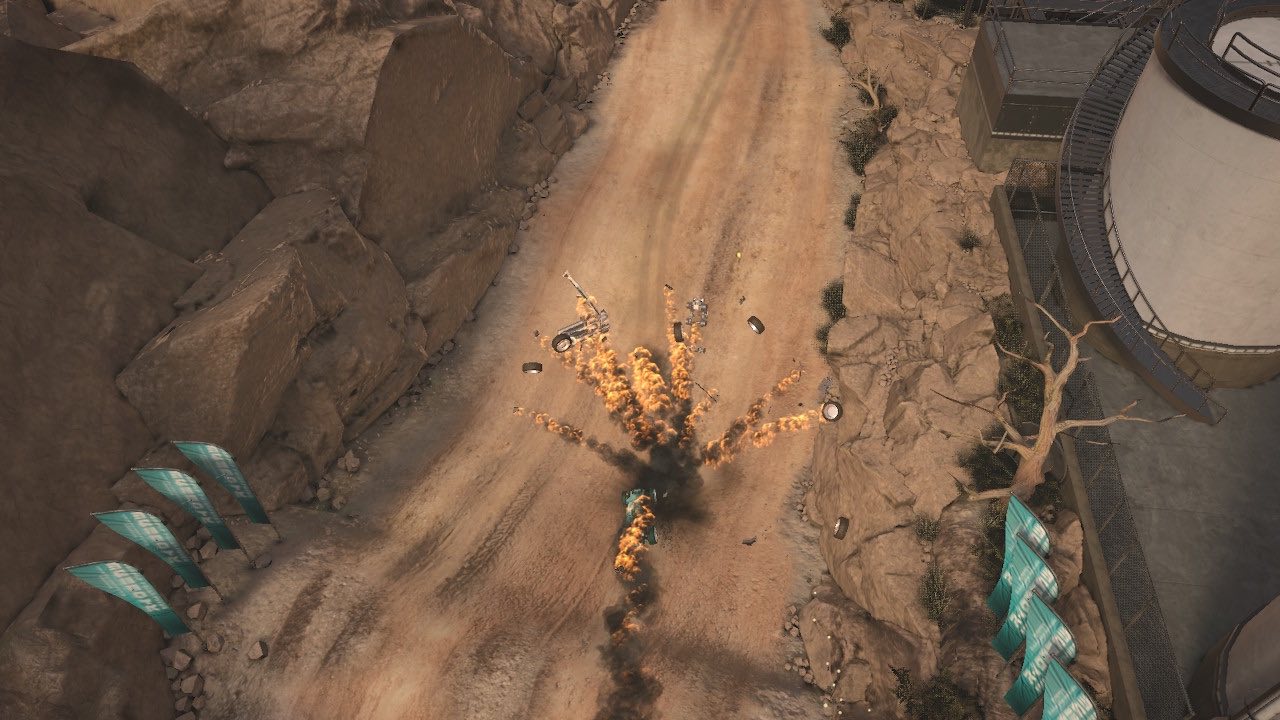 NI: What were the challenges in developing a unique take on the top-down racer genre?

SW: VooFoo’s approach when green-lighting new projects is that unless we confidently believe that we can create something that competes with, or ideally betters, anything that’s already on the market, we don’t do it. We felt that the top-down racing genre had become somewhat stagnant of late, especially on console and felt that we could, with our expertise in visuals and realistic physics, really it relevant again. In all fairness though, once the design direction was set in stone, the project progressed relatively smoothly.

NI: It’s now heading to Nintendo Switch. Did that decision come from seeing how well-suited it was to the portable home console’s concept?

SW: Absolutely. It’s actually quite ironic that the Switch hadn’t even been announced when work on Mantis Burn Racing began. When details of the console started to drip through we began to realize that Nintendo’s new handheld could be a perfect home for Mantis Burn Racing’s accessible, ‘pick up and play’ gameplay. Likewise, the multiplayer focus of Mantis Burn Racing, especially our couch multiplayer, fits the unique control options of the Switch as if it was designed for it from day one.

NI: This is the second time that you have developed a game for a Nintendo platform, after Pure Chess on Wii U and Nintendo 3DS. How has your experience been?

SW: Nintendo was always very supportive while we were developing Pure Chess for Wii U and 3DS, and the same has been the case this time around. It was also a very straightforward jump from Wii U to Switch, as both share many of the same design principles from a software viewpoint internally. Nintendo offers a very well built set of tools to ensure developers can get the most out of the hardware, which was particularly helpful in our efforts to get Mantis Burn Racing running at a solid 60fps, a target that we managed to reach. 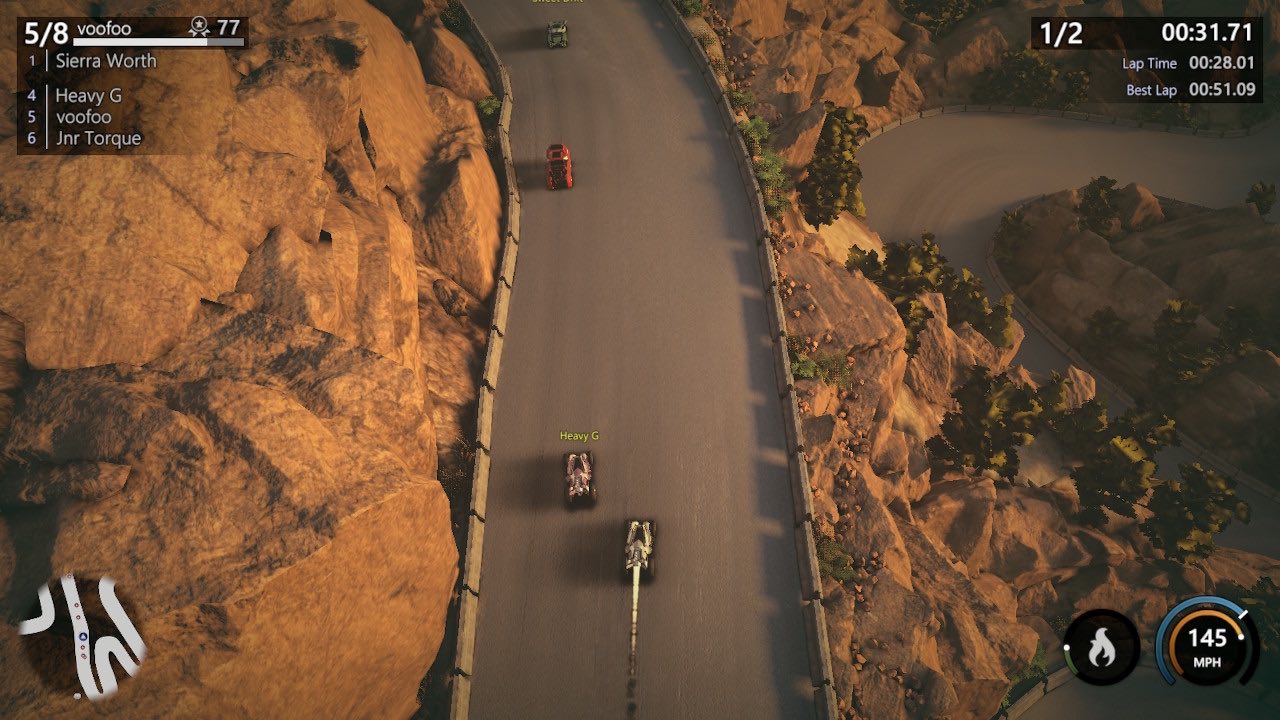 NI: Many independent developers have spoken about how hard Nintendo has worked to make the whole process much easier for them on Nintendo Switch. Has that been the case for you?

SW: Yes, I’d say so. Nintendo treats independent developers on a par with larger studios, and make the whole process of development and publishing, from concept proposal right through to release, as straightforward as possible. They have support staff and engineers ready and willing to respond and help with queries at short notice.

NI: Does that process compare favourably with other platform holders, or are there still niggles to work through?

SW: Nintendo have proven that they want to build productive relationships with indies like ourselves. They are certainly thorough when it comes to deciding what to approve, and also in their internal QA departments, their determination to ensure sub-standard games are not released can only be a good thing.

NI: Mantis Burn Racing was playable on Nintendo Switch at EGX for the first time. Were you pleased with the reaction to it?

SW: Absolutely. We can honestly say the reaction to the Switch version of the game has been incredible across the board. To get such a positive reaction from gamers at events like EGX really gave us confidence that the game could thrive on Nintendo Switch. 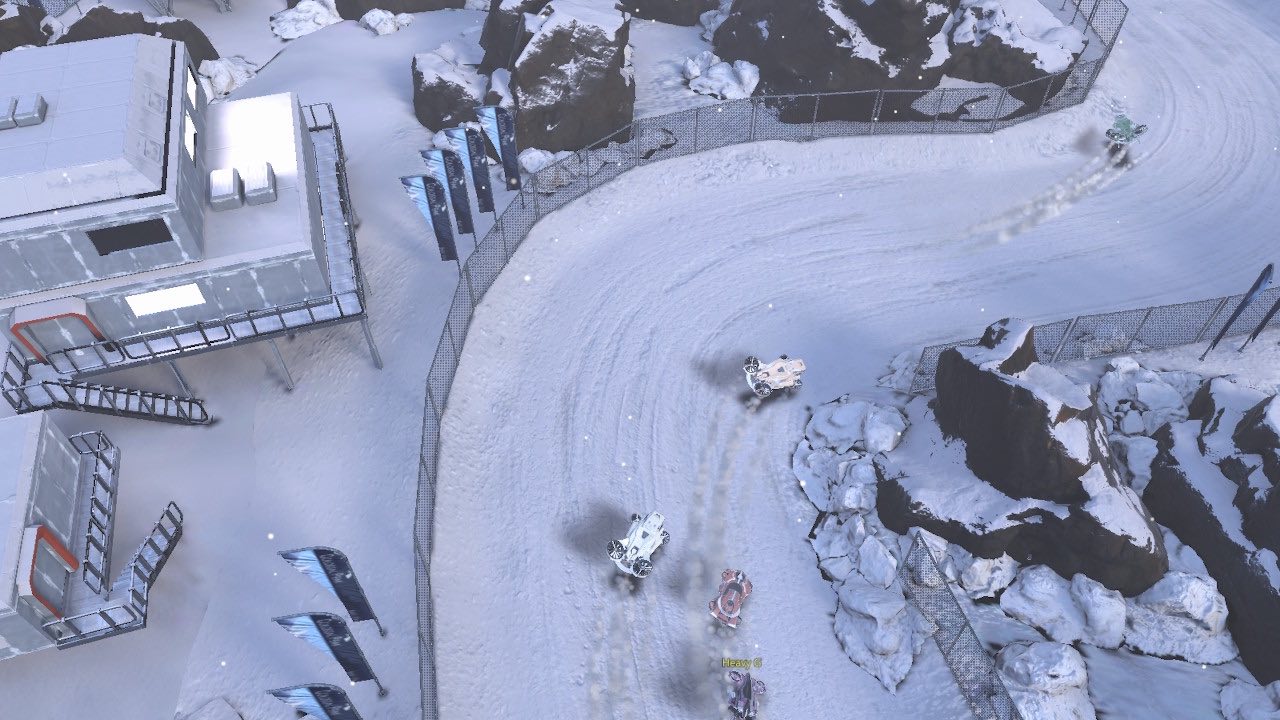 NI: What’s your favourite vehicle class to race as, and what pointers would you give to new players?

SW: I’d say in the office most people prefer the light-weight vehicles such as the ‘Sidewinder’, they’re small and agile which allows them to remain nimble and quick around the corners, which can often give you a nice advantage, depending on the track. Upgrades are vital to your success in Mantis Burn Racing, so don’t think creating a fast vehicle is just about power. Too many engine upgrades will just lead to speed-sapping wheel spin and uncontrollable cornering. Pick and choose wisely to create the perfect balance of upgrades.

NI: I imagine that the game will support split Joy-Con for two players in local multiplayer?

SW: That’s right, on the Nintendo Switch there’s even more ways to play Mantis Burn Racing. Although there’s a massive single player campaign in the game it’s the competitive multiplayer where the game really comes to life and is the most fun to play. We support up to 4-players in local split-screen races with up to 8-players online where players can race against opponents on other platforms with cross-platform play. We’ve also added local Wi-Fi multiplayer and the ability to go head-to-head in 2-player local split-screen races where players sit ‘cross-table’ at opposite sides of the Switch.

NI: It was recently announced that the game will support 60fps. Has that been a challenge for the team to achieve on Nintendo Switch?

SW: To a degree, yes. We spent a lot of time getting to grips with the capabilities of the Switch and we learnt a lot by digging deeper into the hardware to discover where frame rate improvements could be made. With perseverance we got the game running at a consistently smooth 60fps, we were determined to make the Switch version the best it can be!

NI: Mantis Burn Racing will also have cross-platform play with other players on Xbox One and Steam. What are the difficulties in arranging that, or is it a fairly simple process?

SW: From a technical point of view, this was a relatively simple process for us. We have been using our own proprietary online server technology for a number of years now, and this has been capable of supporting cross-platform play for some time. The bigger challenge has typically been getting the platform holders to agree to it, but thankfully now both Nintendo and Microsoft are embracing the idea of an open online community, which means players can enjoy a much wider and more diverse range of opponents to race against.

NI: The game will include the Battle Cars, Elite Class vehicles, and Snowbound tracks on Nintendo Switch. Are there any plans for more downloadable content beyond this?

SW: We have ideas and as long as there is sufficient demand for new content we’ll keep making it.

NI: Hopefully you have had a positive experience in bringing Mantis Burn Racing to Nintendo Switch. Has that encouraged you to consider the portable home console for any future projects?

SW: We’ll let you know after we get the first week’s sales! Seriously, we love the Nintendo Switch and we think Mantis Burn Racing is genuinely a great fit for it. It’s definitely a console we want to develop more games for in the future. Watch this space.