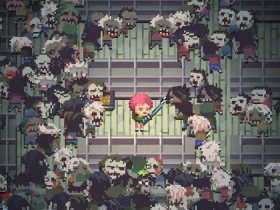 Vlambeer has announced that Vlambeer Arcade will release on Nintendo Switch, a collection of bite-sized games that will grow over time.

The first will be UltraBugs, which is described as a fast-paced, high-score-centric game. You must pilot a ship and fight back against endless space bugs.

Making it all the more difficult, your enemies will split up into more space bugs when they are defeated. Once you have gunned down boss monsters, you can unlock enemy DNA that can be used to customize your ship to help you in your fight.

Vlambeer Arcade with UltraBugs will release on the Nintendo eShop for Nintendo Switch worldwide in 2019.