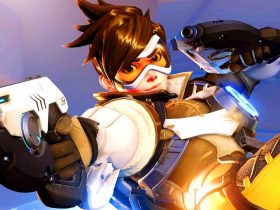 Overwatch On Nintendo Switch Could Happen

The Global Postal Service is in trouble. After parcels repeatedly went missing the company took drastic measures to save themselves from going bankrupt, pinning their hopes on using the mysterious Box-O-Matic to create the ultimate postal service. Self-delivering cardboard boxes.

Amazon Prime Air may promise to deliver packages to you within 30 minutes, but, in Unbox: Newbie’s Adventure, it’s the parcels themselves that are making a beeline for your front door. With undamaged corners, no scuff marks, and a delightful new-box smell, developer Prospect Games whisks you through the basics before transporting you in a large shipping container to Paradise Isles.

This tropical location has been overrun by the Wild Cards, ex-Global Postal Service employees that got sick of being treated like objects and, therefore, chose to rebel. Rallied around the evil outlaw Wild, they have been causing trouble and will attack you on sight – their goal being to destroy their former workplace. 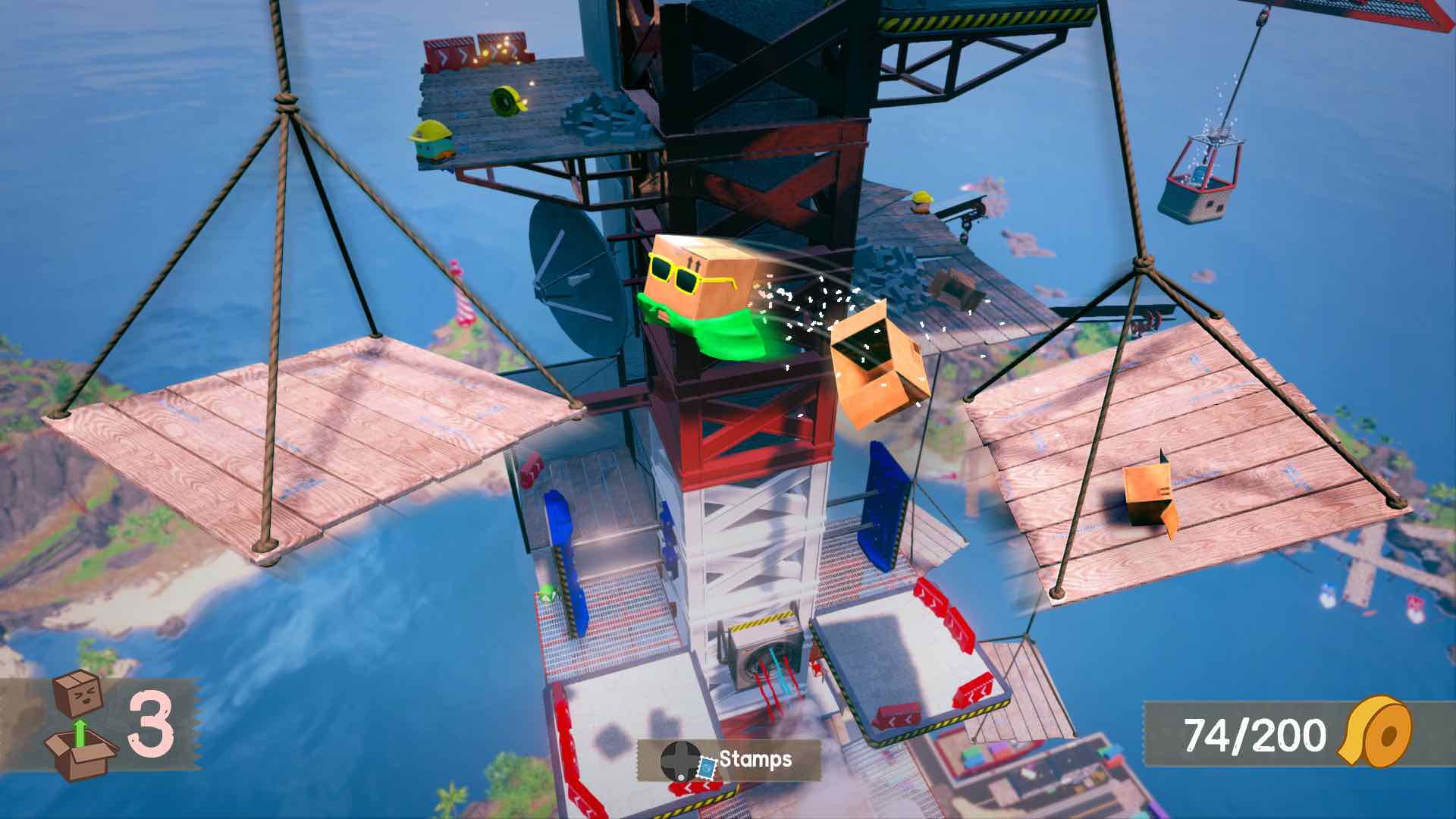 With its soft beaches, warm sunshine, and steel drum-heavy background music, your newfound friend Bounce first puts you through your paces in three challenges to test your agility, accuracy, and ability to overcome puzzling scenarios – which equate to collecting magical floating silver tape, shooting targets with lock-on fireworks, and escaping a cage.

This is an early indication as to how you will spend your time in Unbox: Newbie’s Adventure, helping friendly sentient boxes with their troubles – whether that be reactivating a radio tower, rescuing stranded boxes, defeating Wild Cards, recovering speedboat parts, or generally surviving gauntlets filled with buzzsaws and flames.

Newbie can roll along the ground and propel himself into the air, with the B Button letting you perform a Slam to fall faster and, if held, blast any enemies or objects that are nearby as you hit the floor. But the biggest trick that Unbox: Newbie’s Adventure presents you with is the Unbox ability, which, when you press the L Button, will let you sacrifice a layer of packaging to perform a double jump. These can be chained up to six times, too, making it far easier to get around the environment – health pickups that are scattered around restoring any lost layers. 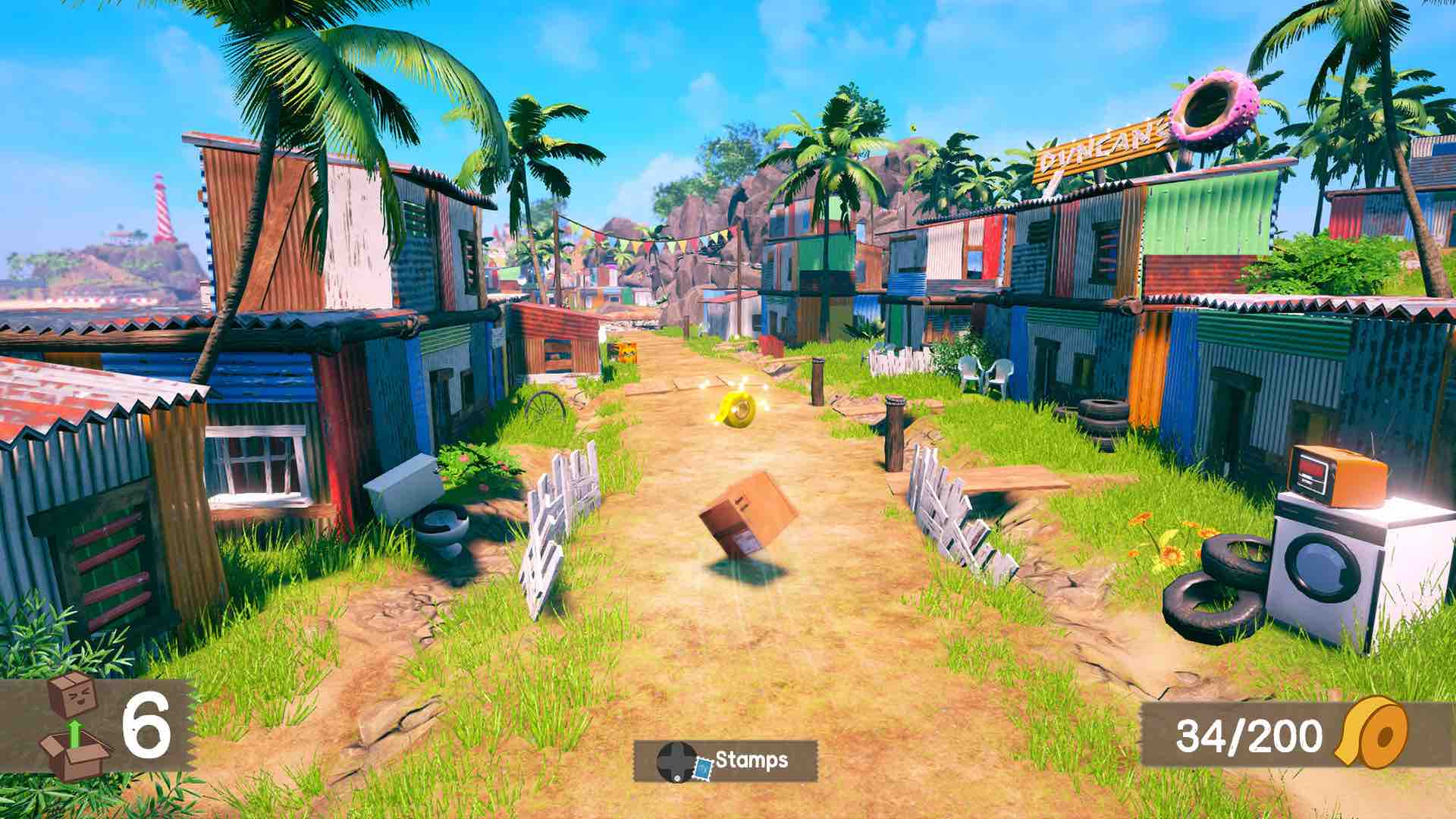 The player will also, eventually, be given the chance to explore Parcel Peaks and Isla Cartulina, with each of the three areas – as well as the Global Postal Service oil rig – acting as a playground where Prospect Games has stuffed collectables wherever they possibly can. There are 800 Gold Tapes, 54 Stamps, 3 Master Stamps, and 31 Zippies to rescue, something that will keep you unendingly busy for hours on end.

If there’s one thing that Unbox: Newbie’s Adventure doesn’t lack, it’s charm. Whether that be the gibberish voices that each sentient box speaks in as a clear throwback to Banjo-Kazooie, the pun-filled dialogue that sees the Global Postal Service’s oil rig headquarters being called Other Base, or changing your appearance with hats at Swift Tailoring, it’s a game that has clearly been made with a lot of heart.

It’s a shame, then, that it’s let down in multiple areas. It’s clear that there has been an effort to humour players with the quirky and unpredictable physics-based gameplay seen in games such as Goat Simulator and Octodad: Dadliest Catch, but the lack of precision with movement frequently leads to moments that frustrate rather than entertain. 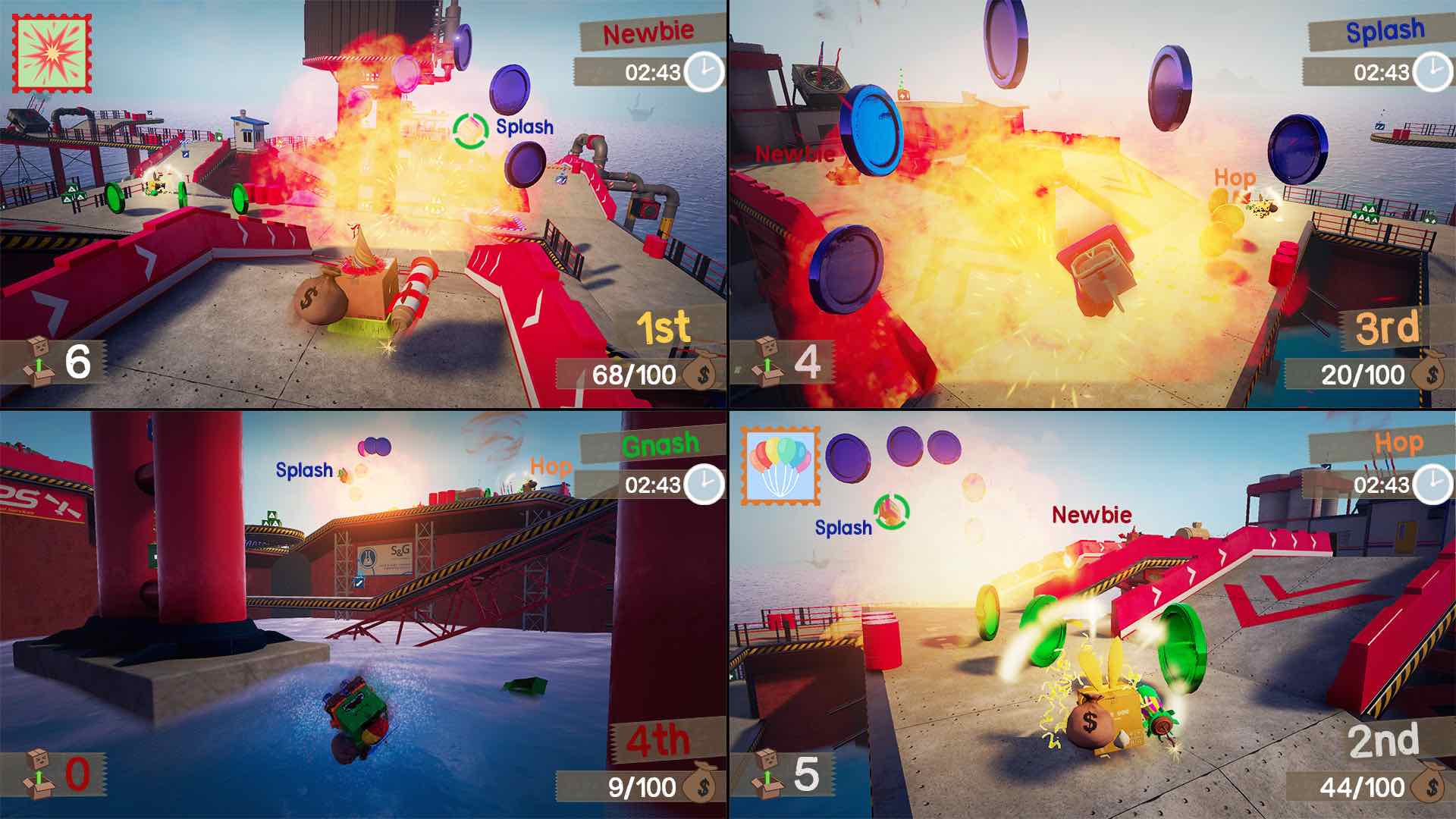 The worlds are fun to explore, but the graphical fidelity has taken a hit in the porting process to Nintendo Switch. Everything doesn’t look particularly sharp which is not only off-putting but worrying if this was the best that the team could manage to squeeze out of the portable home console – especially when compared against how much more cleanly it appears on other platforms. HD Rumble has been welcomingly implemented but this, too, is problematic in that it constantly jabs your hands as you roll around.

The Multiplayer modes looked set to be a perfect fit for Nintendo Switch’s audience, with Free Play and Tournament options. Whether collecting as much Golden Tape as you can, racing to be the first to the patented Finish Box, or surviving as the Oddbox for the longest time to score points, there are five game modes here as a fun distraction to the main game – with 11 levels to play on, and weapon pickups to make them even more chaotic. With more players thrown in the mix, there’s enjoyment to be found here – even if the visuals take another hit.

Unbox: Newbie’s Adventure packs character, charm, and potential, but fails to deliver on the goofy adventure that it promises. It’s not bad enough that your parcel will go astray, but any criticism lies more in the fact that wilder ideas were needed to make the activities stand out from the crowd. What we’re left with is a game that treads ground that is too familiar without many fresh ideas away from its main star, which is what nearly put the Global Postal Service out of business in the first place.