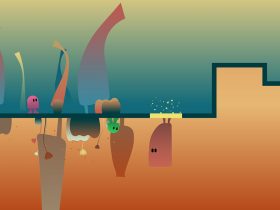 The Umihara Kawase BaZooKa! Collector’s Edition is limited to 1,500 copies worldwide. and will also be made available exclusively from the Strictly Limited Games Partner Shop.

Young sushi chef Umihara Kawase returns in this fast-paced action game where your goal is to clear the screen of enemies using your enchanted bazooka and a multi-functional fishing rod. That’s while leaping between moving platforms and dodging perilous obstacles and quirky aquatic enemies.

Your fishing line can be used to hook an enemy or another player to banish them, or as a magical grappling hook to help you quickly travel across the stage. Whereas your bazooka can shoot gigantic balls and, whenever you run out of ammo, you can catch a mysterious creature to recharge it.

The game has a 40-stage Challenge Mode that can be braved alone or with up to three other players, as well as co-op and competitive multiplayer Battle modes such as Battle Royale and Star Match modes.

“Umihara Kawase is a well-known and famous brand. There have been many successful renditions going right back to the Nintendo Super Famicom release,” explains ININ Games CEO Helmut Schmitz.

“Umihara Kawase BaZooKa! not only offers great single-player options but also multiplayer with four players and esports opportunities that will open up the game to a wider fanbase. Innovative skills, new challenges, infinite possibilities, superb mechanics, pixel-perfect physics and a cool cast, what more can you ask for? It’s one of those games that will keep you coming back for more.”

Umihara Kawase BaZooKa! will release at retail and on the Nintendo eShop for Nintendo Switch worldwide in July 2020.