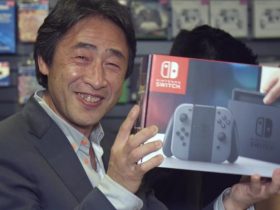 The nature of competition spans way back to the beginning of time. Whether it be in the form of vegetation fighting its way closer to the sun, or animals in the wild proving dominance over food and mating rights for survival. Humans, on the other hand, have only merely evolved from such primal necessities. Using organised sport, or games, to feed the chemical hunger that’s still hard-wired into each and every one of us. Now, instead of people carrying out this bond, imagine an intergalactic tournament bound in close association with a reality full of Burts from Sesame Street, setting out to compete against one another to improve upon their somewhat depressing livelihoods. One that sees three decades worth of arcade classics such as 1972’s Pong, 1984’s Warlords and a string of 90’s Capcom fighting classics collide. The end result? Ultra Space Battle Brawl, apparently.

Ultra Space Battle Brawl is nothing new in terms of ideas and gameplay. Stripped down to its code, it is a modern incarnation of Magnavox Odyssey’s table tennis – a game released on the first home console ever built and providing heavy inspiration for Atari’s much more popular Pong. The simple competitive structure of bat and ball was so influential that many takes on the concept soon surfaced. Even Nintendo themselves crept into the gaming industry with their own versions of it in the form of the Color TV-Game 6 console. So, with that said, it shouldn’t need too much tweaking in terms of providing that basic, yet addictive rivalry set up. After all, its reliance on a tried and tested formula does span back literally generations of entertainment.

The game doesn’t disappoint in regards to the addictive nature of its lineage. 10 combatants, each with their own strengths and weaknesses, must all work against each other to smack a ball about in space while orbiting various planets of the Solar System. The main aim of the game is to protect your gem from being smashed to pieces by the opposition. The gems themselves contain a health bar located at the top of the screen like any usual 2D fighting game. Although in this case, each precious stone is protected by a flock of stupid chickens. Every combatant has a paddle of some unconventional form to reflect their personality, followed by an Ultra move that works as a sort of comeback mechanic when some of the player’s chickens have been eradicated. As crazy as it sounds, this leads to agonisingly tense matchups as each player has full freedom of the screen while desperately spamming that paddle button to open up cracks in each other’s gem. It is simple, traditional fun that should easily please any casual guests looking for some friendly rivalry. 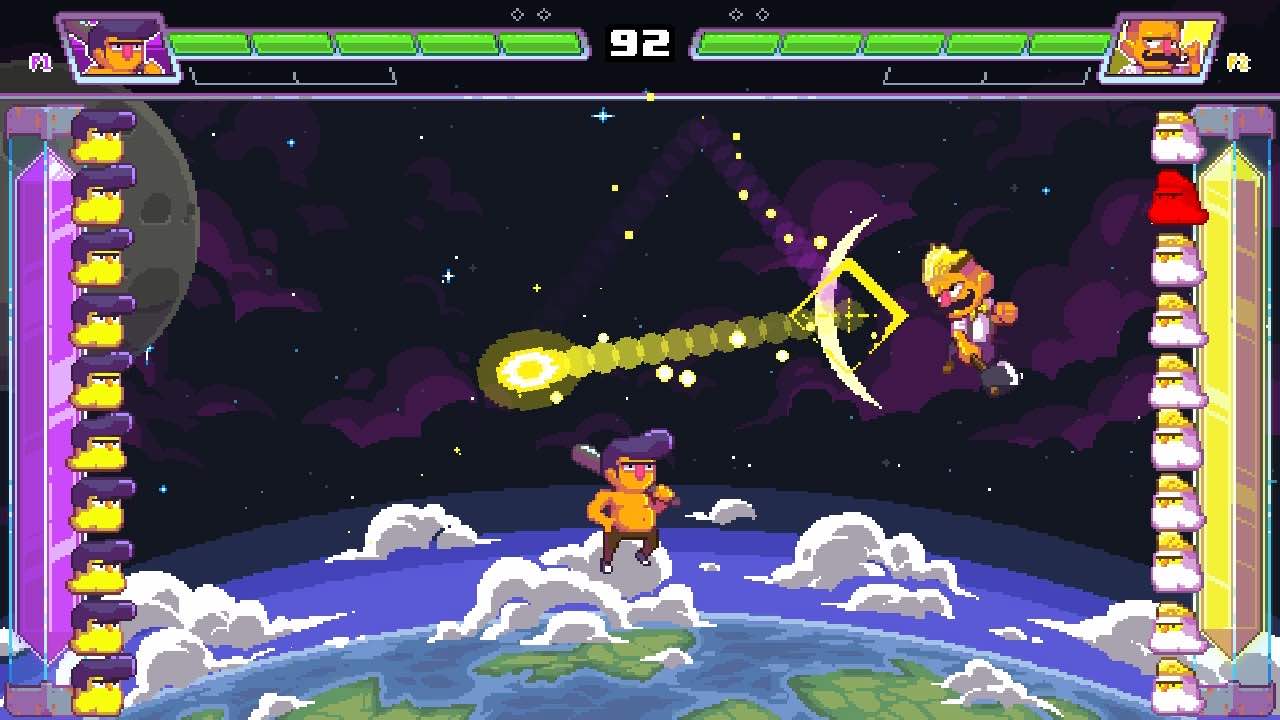 In Versus mode, you have a selection of stages based on planets that change the way that the gems are positioned. The Earth stage, for example, will house a tall gem that fills each side of the screen while accompanied with the row of chickens holding up the front line. Other stages may be a matter of two smaller gems to protect or even an orb that has the same job as a gem but gets smaller every time it takes a hit. It’s an obvious, yet fun way of varying up the gameplay as you duke it out across rounds while throwing out all the complaints and excuses under the sun for losing.

Unsurprisingly though, Ultra Space Battle Brawl is very shallow in regards to overall depth and gameplay features. There are a few mechanics in place to set up some basic strategies such as the Dragon Ball Z-style dash move to reach the ball faster, or hitting the ball at a certain angle for mind games and pot shots. The characters’ Ultra moves are used as an advantage to manipulate the ball in some way. Take Yayuk for instance, setting up a duo of moving shields that reflect the ball back while closing in towards the opponent’s side, or Robin’s doppelganger that splits herself into two to become twice the threat. The Ultra moves as a whole can tend to feel a bit unbalanced between certain characters, despite some effort made to distinguish their strengths and weaknesses.

The problem is, it just never seems to really deepen any further from there. The ball will begin to speed up during a rally, but holding the paddle button down doesn’t seem to power up a shot like I would naturally expect it should. Instead, your character just loses movement speed, making that anticipation of a shot with an open arm feel empty and somewhat impractical. It’s a tiny little detail, but this lack in timing a power shot does make mindless monkey spamming the top tactic of the sport. Another discrepancy that I found was small jitters in slowdown, more so in multiplayer. It may even be for effect to simulate weight in a shot, although, if that is the case, it doesn’t quite pull it off well enough to look convincing. 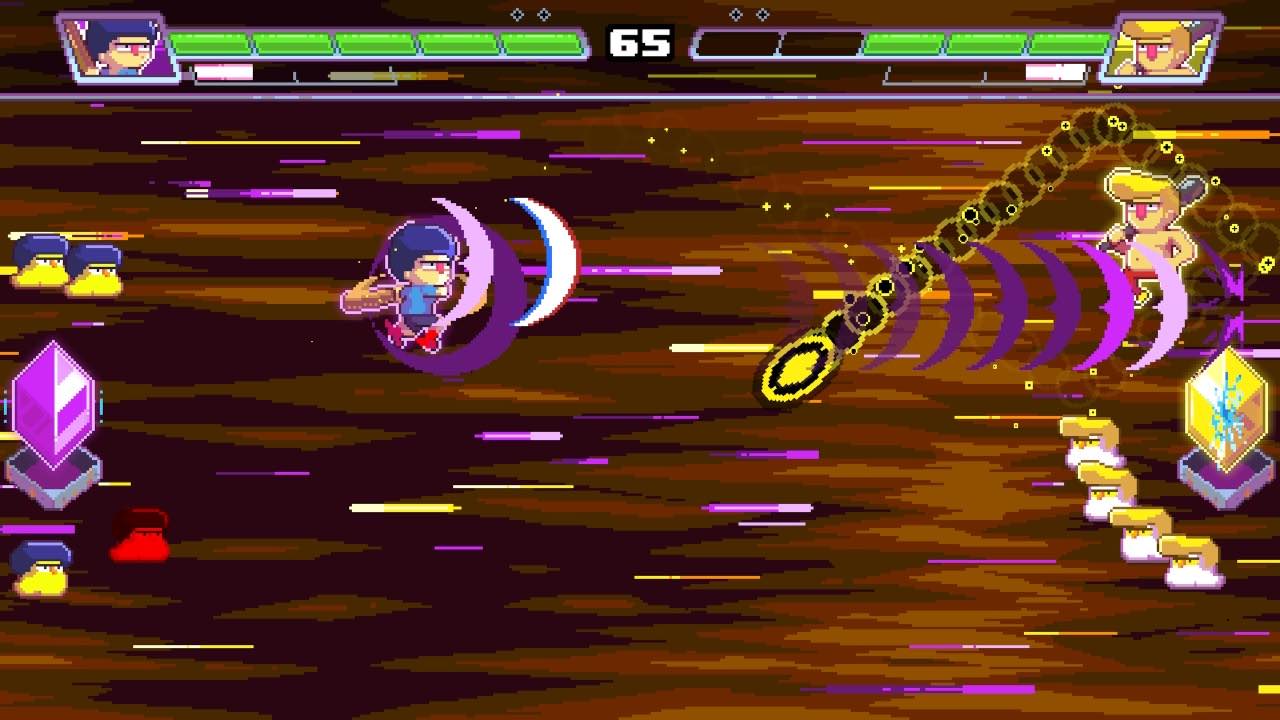 There is no online mode to venture into either, although, to be fair, this is the sort of game that should be played in short bursts while meeting up with friends and family in flesh and blood. However, there is an Arcade mode that caters for the single player that compliments the fighting game aesthetics. Just to pre-warn you, it soon becomes incredibly challenging, if a little broken, in difficulty the closer to the end you get. This may prove overwhelming for some, considering that there’s no difficulty rocker to tone the challenge down a bit. Each character does have a backstory to start with, along with an ending should you manage to beat the game – a triumph that will also unlock cool gallery artwork for your efforts. Other than that, there aren’t really a lot of features that stand out or at least provide any longevity to the gameplay itself.

That doesn’t mean it lacks character by any means. The character selection screen echoes that of the original Marvel vs. Capcom in presentation and sound, and the opening cinematic parodies the famous Ryu Hadouken intro from Super Street Fighter II Turbo. The characters themselves are also fun to look at, like a group of dysfunctional rejects from Jim Henson’s storage room. They come in a variety of personalities and silly backstories that reveal their reasons for entering the tournament. Take Brodin, for example, a distinguished gentleman violently carrying out a good deed only to have his upper-class reputation tarnished as a result. Or baseball bat-wielding bad boy Djarwani, who attempts to climb out of poverty by winning the Ultra Space Battle Brawl Championships. It’s all daft, if a little dark fun that works and sounds well enough to bang a coin in if you were to walk past a cabinet of it in an arcade. Just watching the dramatic KO finishers certainly feels very Japanese coin-op, especially when huddled around a Nintendo Switch in Tabletop mode.

Ultra Space Battle Brawl is a great quick fix multiplayer game to pull out amongst a gathering of friends and alcohol. It may not offer depth in either gameplay or features, but that raw competitive nerve will undoubtedly stand in the end whenever there is a score to settle. With 2 vs 2 options (or even 2 vs 1 for the less modest gamer), there are plenty of reasons here to bang balls around in space together.