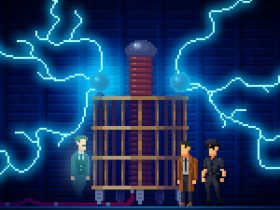 QubicGames and Kyy Games have revealed that Rimelands: Hammer of Thor will release on Nintendo Switch next month.

This turn-based RPG is set in a fantasy world where magic exists next to technology powered by steam. With the developer promising an “intriguing and unpredictable plot,” you play as young treasurer hunter Rose Cristo.

On a quest to reveal the mystery behind a new enemy that has appeared in the world, she will soon discover the truth about her heritage and prevent a threat that could destroy the world.

With fantasy and technology coexisting, you can use spells, melee weapons such as swords, and newer inventions like pistols. There are three skill trees that relate to these combat types: barbarian, assassin, and shaman.

The battle system is based on the roll of dice. Each turn, both you and your enemy will roll and the power of your attacks will depend on the result. Every dice has got an attack side, double attack, defend, and an empty slot.

Rimelands: Hammer of Thor will release on the Nintendo eShop for Nintendo Switch worldwide on October 4th priced at £8.99 ($9.99).