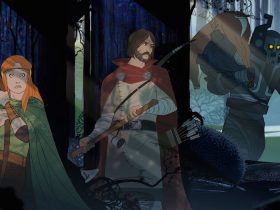 The Banner Saga Marches Toward Nintendo Switch Release Next Week

The Quantum Astrophysicists Guild and ToasterFuel have announced that Deleveled will release on Nintendo Switch.

In this physics-based puzzle platformer, you simultaneously control two characters who fall in opposite directions.

While one falls downwards the other falls upwards, and while neither can jump they can transfer their momentum through solid objects.

This gameplay mechanic must be used strategically to toggle switches, leap through one-way walls, or brave disappearing floors in more than 100 levels split between 10 worlds that each introduce a new element.

Deleveled will release on the Nintendo eShop for Nintendo Switch worldwide this autumn priced at $9.99.