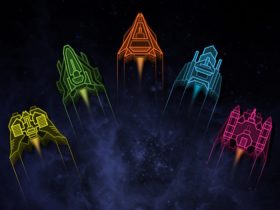 It’s been more than a week since Donkey Kong Country: Tropical Freeze barrel blasted its way to Nintendo Switch. And, while everyone is probably still busy working to defeat the Snowmads and reclaim Donkey Kong Island, we thought that we’d share a handful of the best levels that we enjoyed the most in the big ape’s adventure. 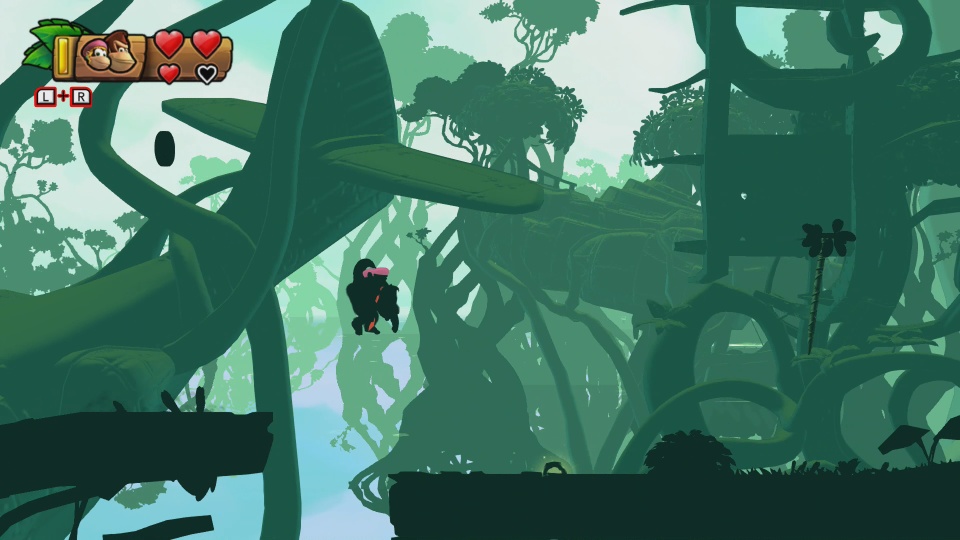 1-B: Busted Bayou
The contender on our list that’s earliest in the game, Busted Bayou in Lost Mangroves is the first to use the silhouetted visual style that was seen in Donkey Kong Country Returns. This time shrouded in a green hue, Donkey Kong’s neon red tie lights the way and the secret level is also a chance to see the luminous white glow that Cranky Kong’s beard would have if he managed to natter his way into a nightclub. There are several crashed planes in the background, and, if you look close enough, you will also see Samus Aran’s Gunship as a nod to the developer’s work on the Metroid Prime trilogy. Throw in one of David Wise’s grooviest music pieces for the game’s soundtrack, and it soon proves to be an early favourite. 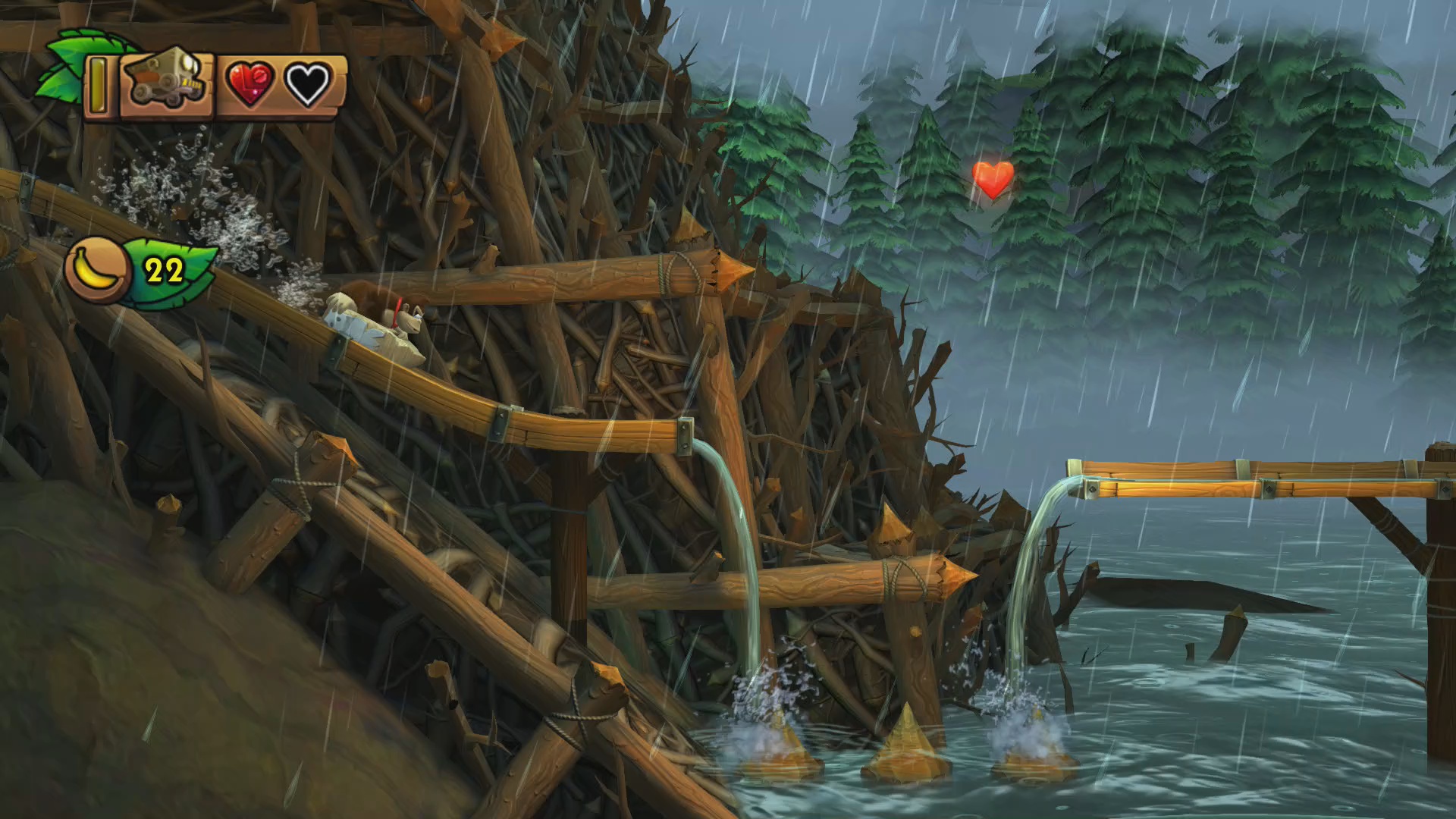 2-4: Sawmill Thrill
With a thunderstorm raging outside, you may think it safer to take shelter. Well, not in Sawmill Thrill. After a barrel blasts you through a window, Donkey Kong finds his minecart running along automated sawmill machinery. Now having to duck and jump to dodge saws that could soon carve Nintendo’s jungle-dwelling mascot in two, the best part comes as you near the level’s close. 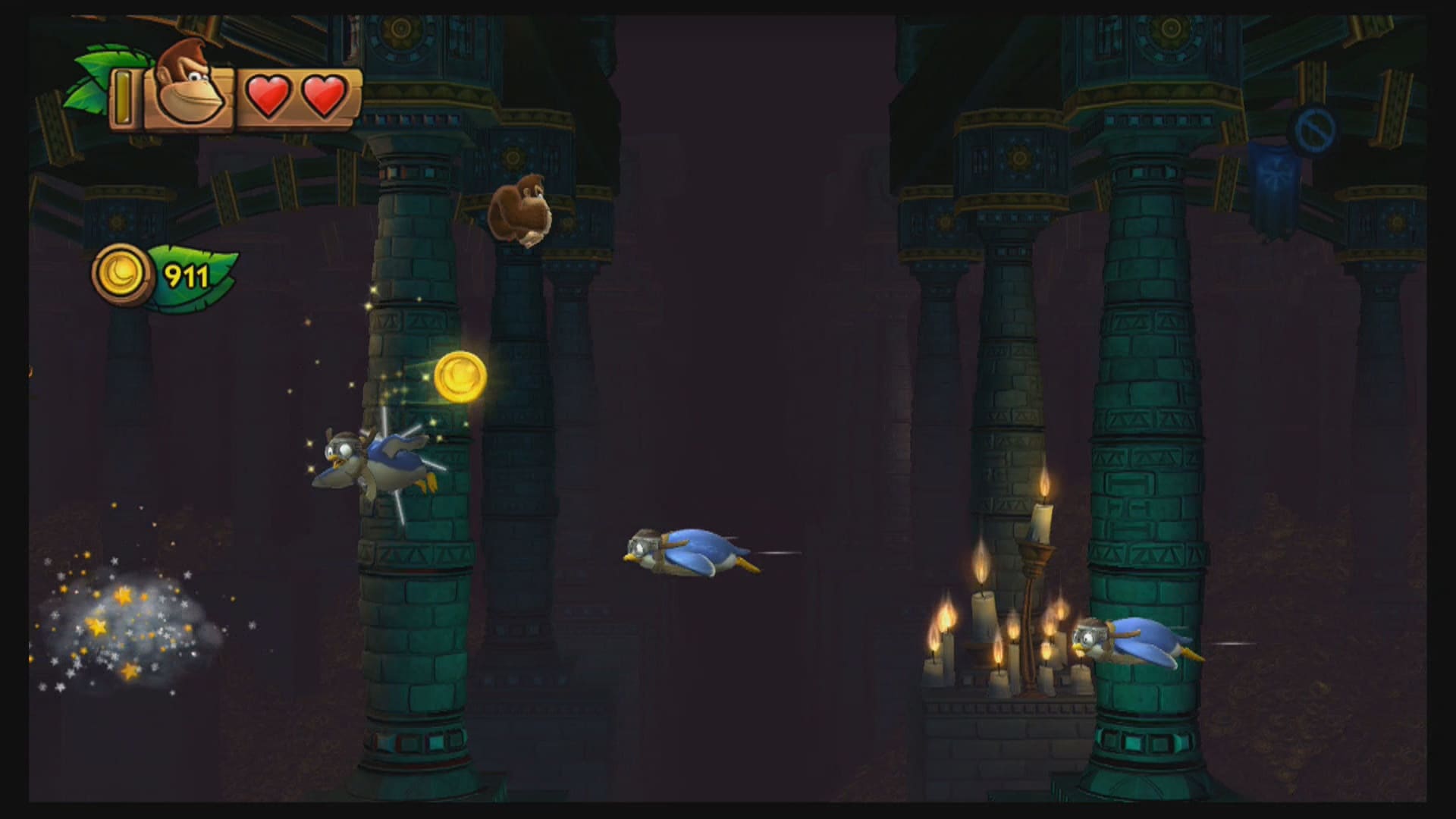 2-K: Bopopolis
Bopopolis puts the bop in, well… Bopopolis. Notorious for how rage-inducingly challenging it is, you must first collect the KONG letters in every level in Autumn Heights to unlock it. Seen as one of the hardest levels that Retro Studios throws at you in Donkey Kong Country: Tropical Freeze, it largely revolves around having to ‘bop’ on enemies to proceed further into the level. With the constant threat of one mistake resulting in you falling to your doom, there are some collapsable platforms that let you momentarily catch your breath before pushing on. Make it to the end, and, while a clear demonstration of your platforming prowess, you’ll probably need to take a break for a bit. 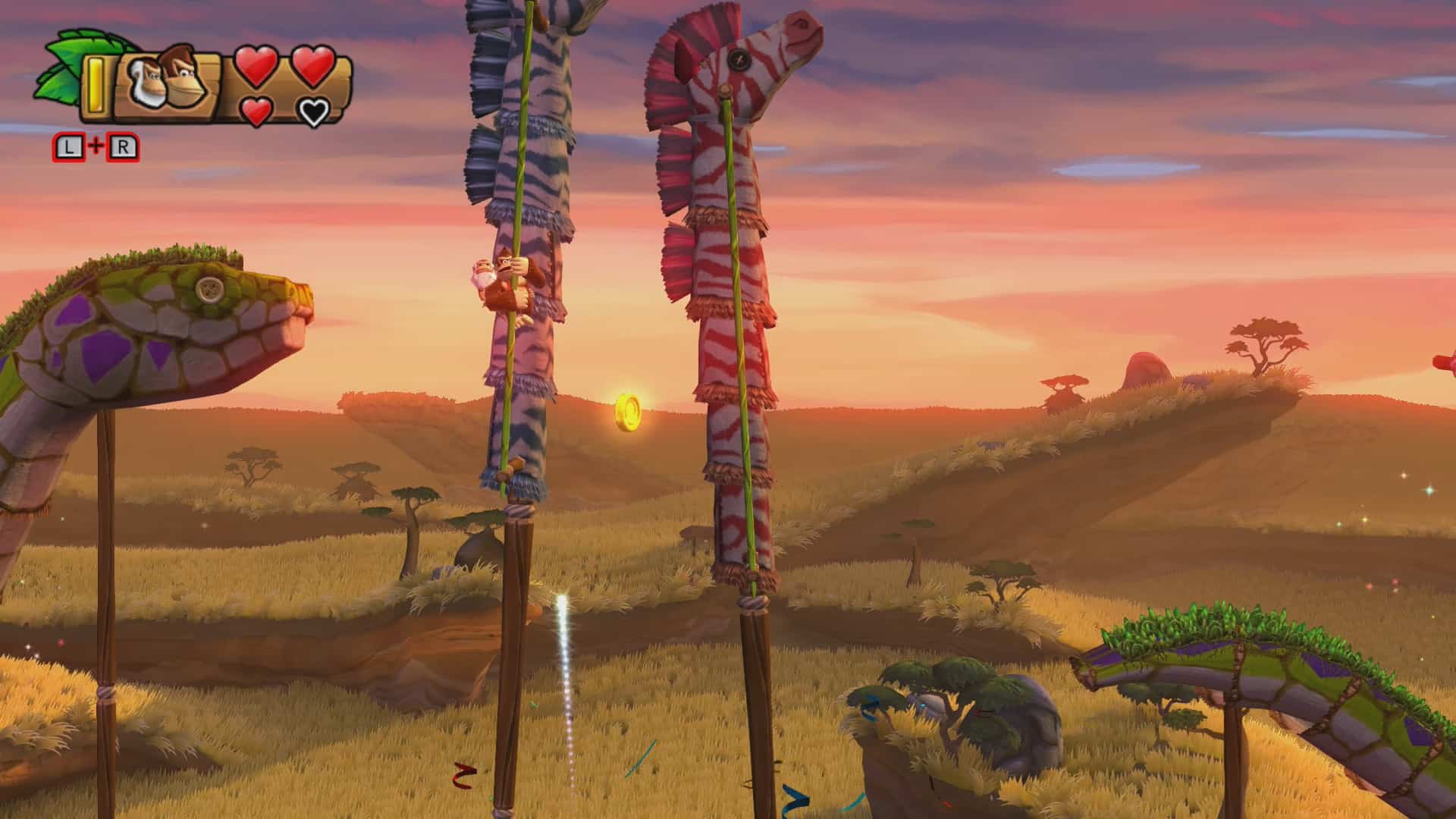 3-1: Grassland Groove
Grassland Groove feels like you’re bounding along with Simba while he boisterously sings I Just Can’t Wait To Be King in The Lion King. The trees sway and dance to easily the best music that David Wise has penned for the game’s soundtrack, with choral African chants accompanying your adventure as you jump, leap between, and climb along elephant, giraffe, zebra and snake-shaped wooden puppets. It couldn’t be a better welcome to the Bright Savannah world and was the easiest choice to add to this list. 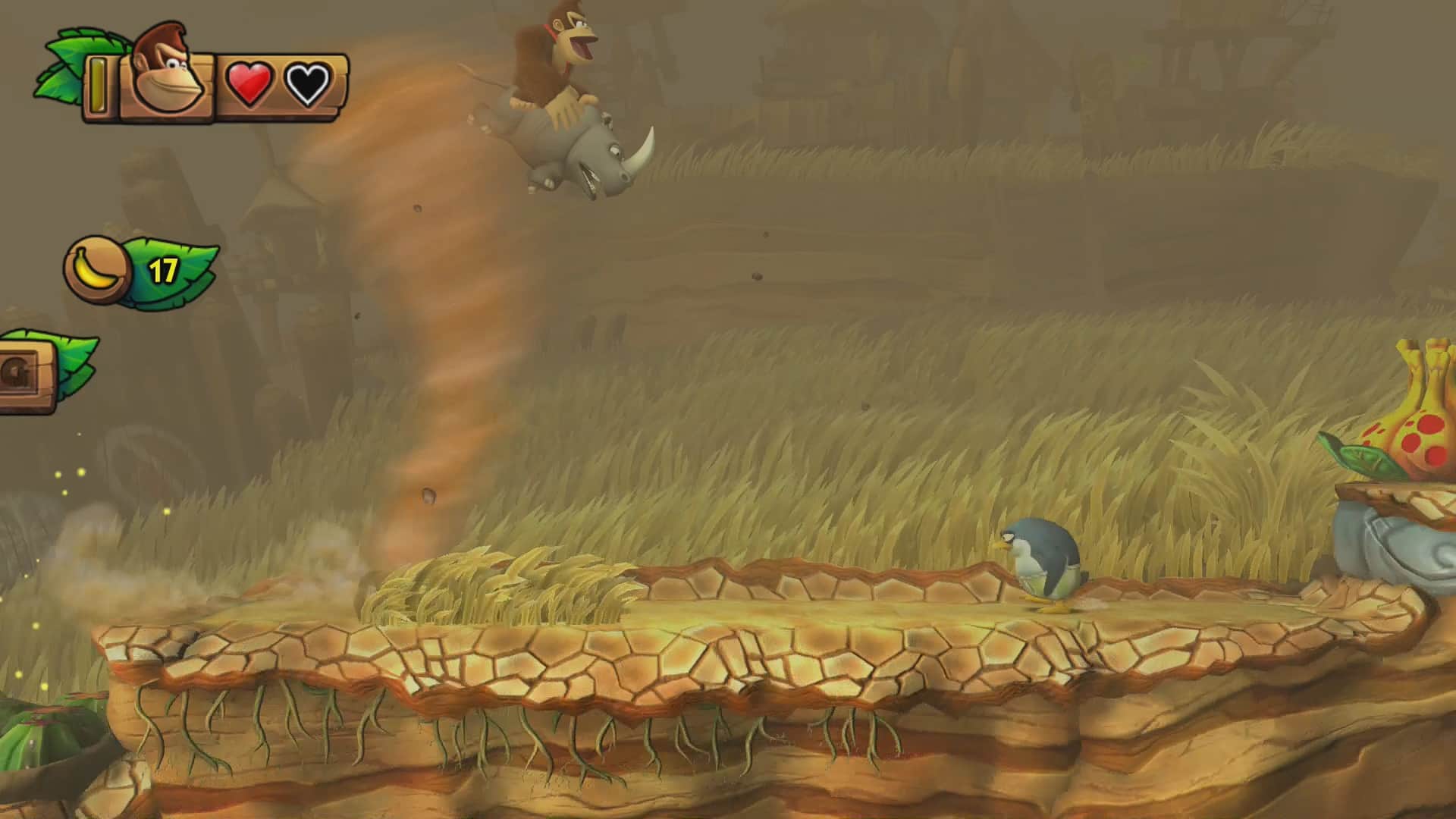 In Frantic Fields, Donkey Kong finds himself caught up in a storm. While the early part of the level will see you confronted with mini tornadoes that will hurl you into the air, you can soon ride Rambi to help you push against increasingly strong winds. But, as lightning starts to crackle and destroys the platforms that you can leap on, you will soon be thrown into a monstrous cyclone with enemies swirling in every direction. It’s pure spectacle and one of the many thrilling situations that you will have to survive in. 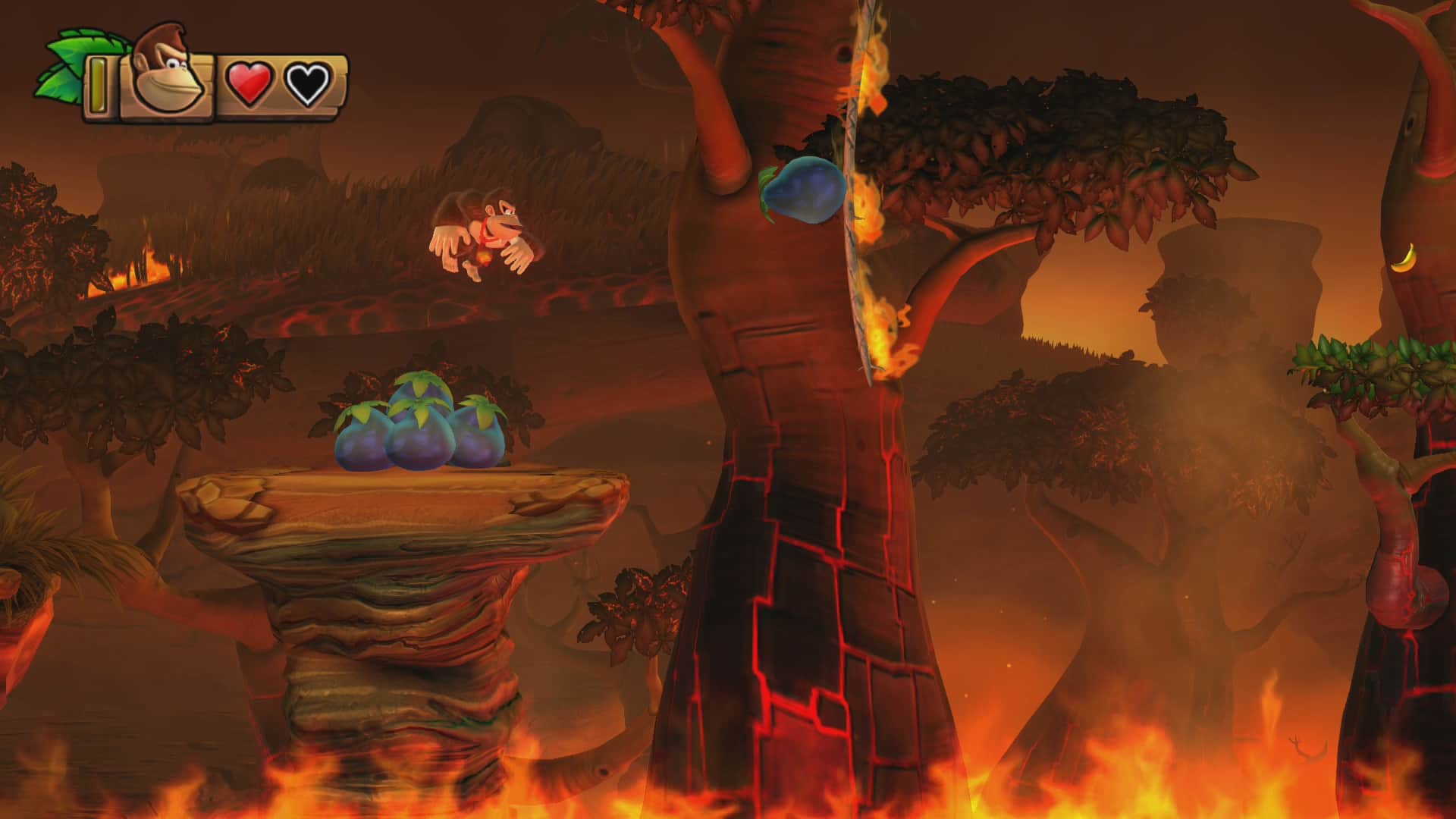 From tornadoes to sun-scorched lands, Scorch N Torch is set around the very real danger that a wildfire can present. The scorched earth will ignite when Donkey Kong lumbers across it, vines are ablaze and leaves on branches quickly turn to ash. In a game that’s largely more jolly in nature, 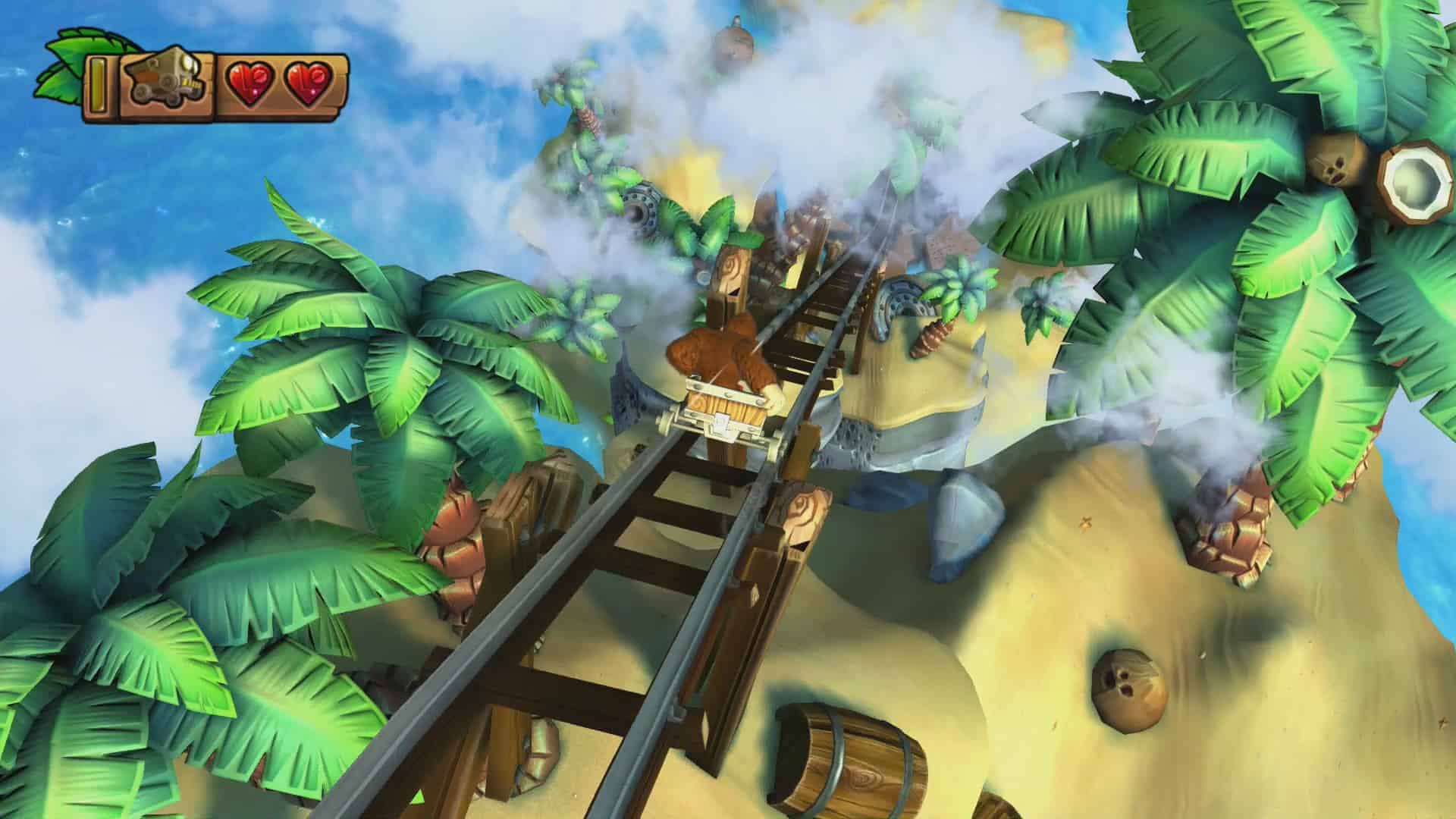 4-2: High Tide Ride
It’s another minecart level, but High Tide Ride is one of the greatest. With sharks snapping at your wheels early on, the minecart soon takes a downward plunge as you speed into an underground tunnel. It’s here that you will have to switch between tracks as giant gill-bearing aquatic creatures take wholesome chomps out of it, with excitement coming from the constant change in camera perspective and the barrels that you are blasted between. 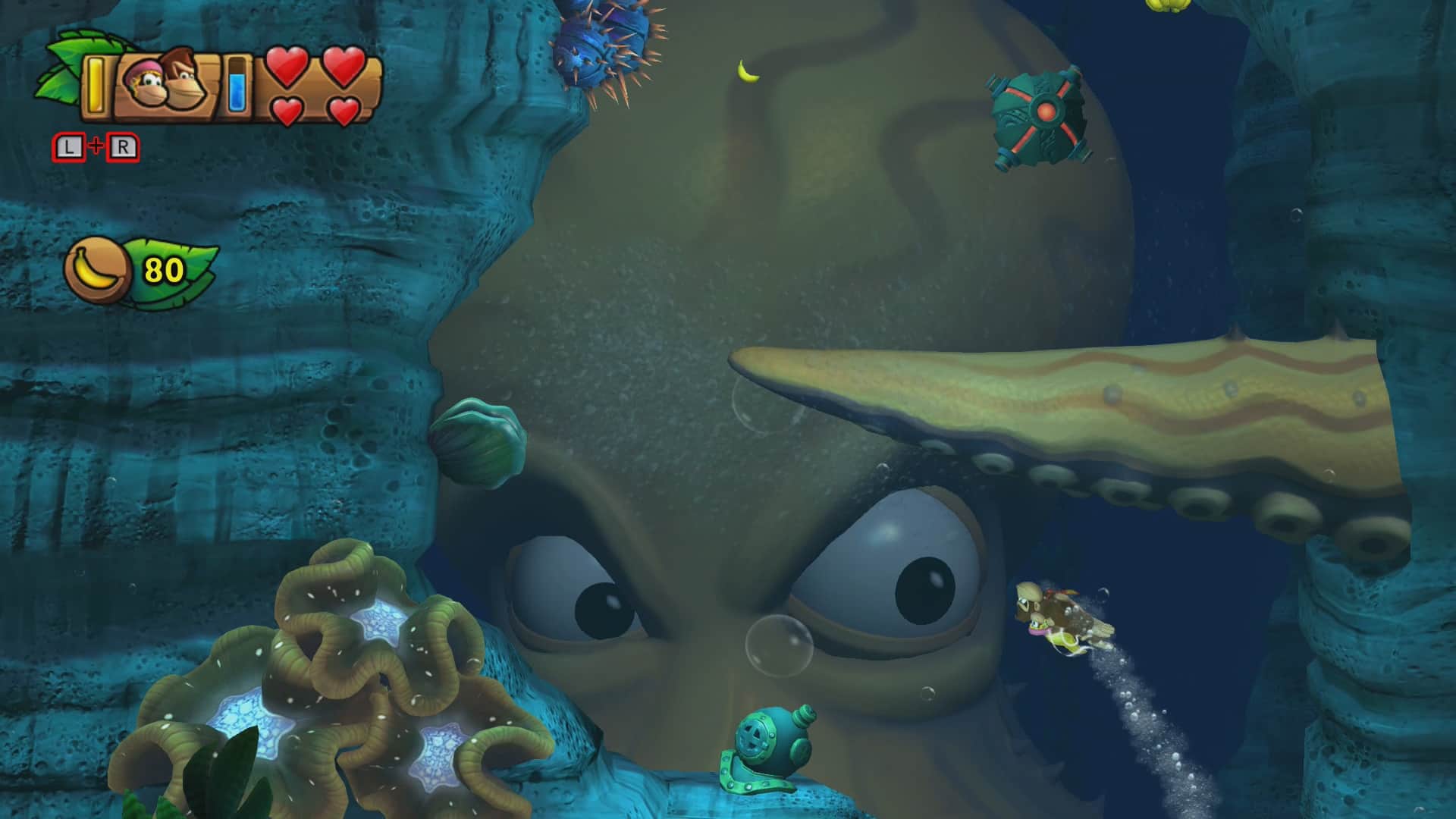 4-4: Irate Eight
We’re underwater in Irate Eight, and, while much of your time is spent dodging mines, swimming against strong currents and grabbing more oxygen from air bubbles, the setpiece moment comes when you are confronted with Squiddicus, an enormous octopus that had first appeared in Donkey Kong Country Returns. Polluting the water with ink in an attempt to suffocate Donkey Kong, the thrill comes in the race to outrun it. Fast swimming and barrels are what you will come to rely on, as you dodge tentacles and falling spiked coral before fighting off Squiddicus. 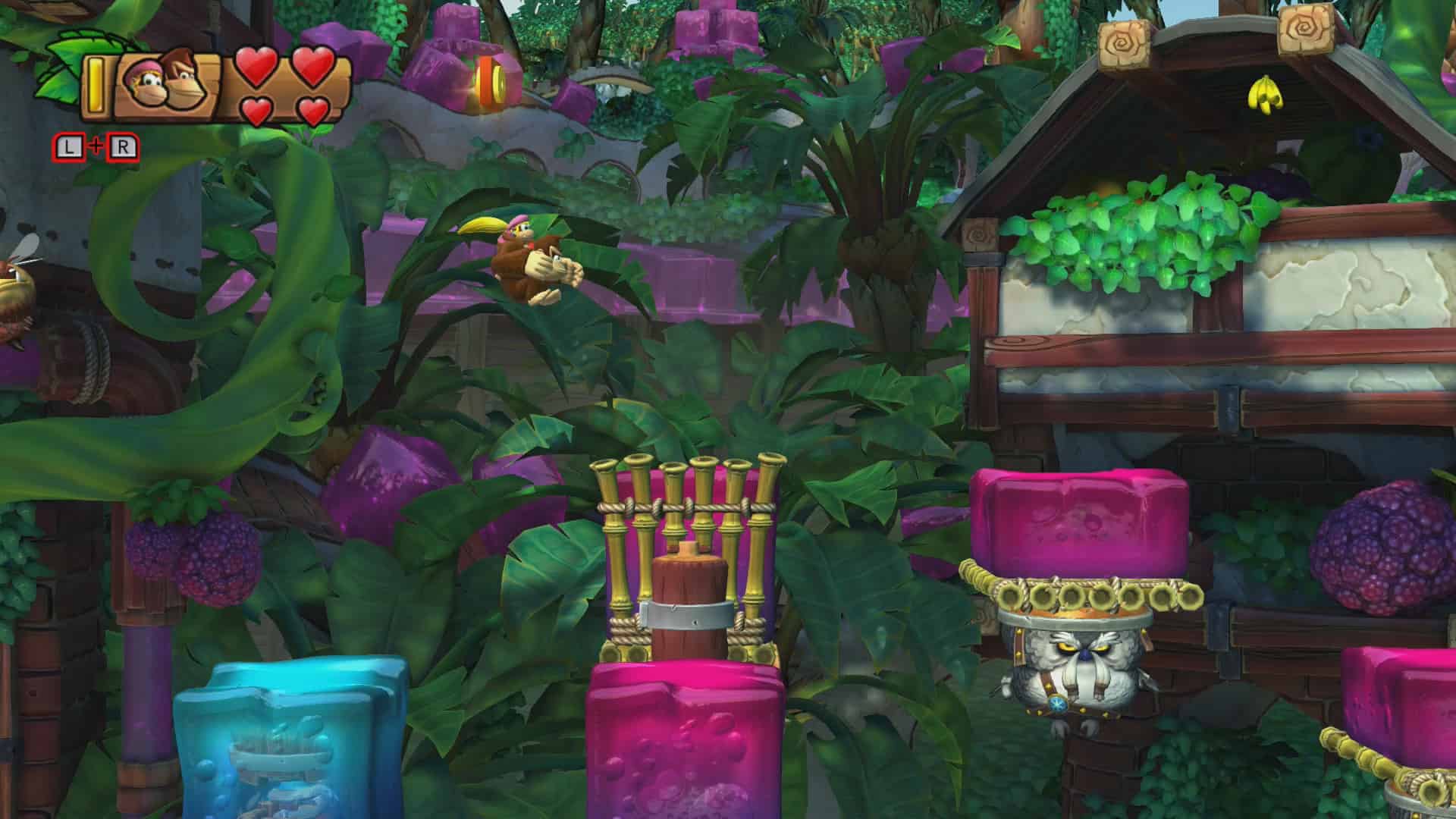 5-5: Jelly Jamboree
Everyone loves jelly, and, in Jelly Jamboree, we have a chance to see how the squidgy substance would be made in the jungle. In Fruit Factory, we see how watermelons are chopped and squeezed, but now, two levels later, the leftover juice has been used to create purple, green, and blue jelly cubes. Purple cubes can be bounced on, gree cubes let you jump higher and blue cubes are switches that will turn specific platforms. The best part though comes near the end when you eventually land in a jelly cube mountain and have to pound your way out, before making Donkey Kong ping between jelly surfaces to reach the level’s conclusion. 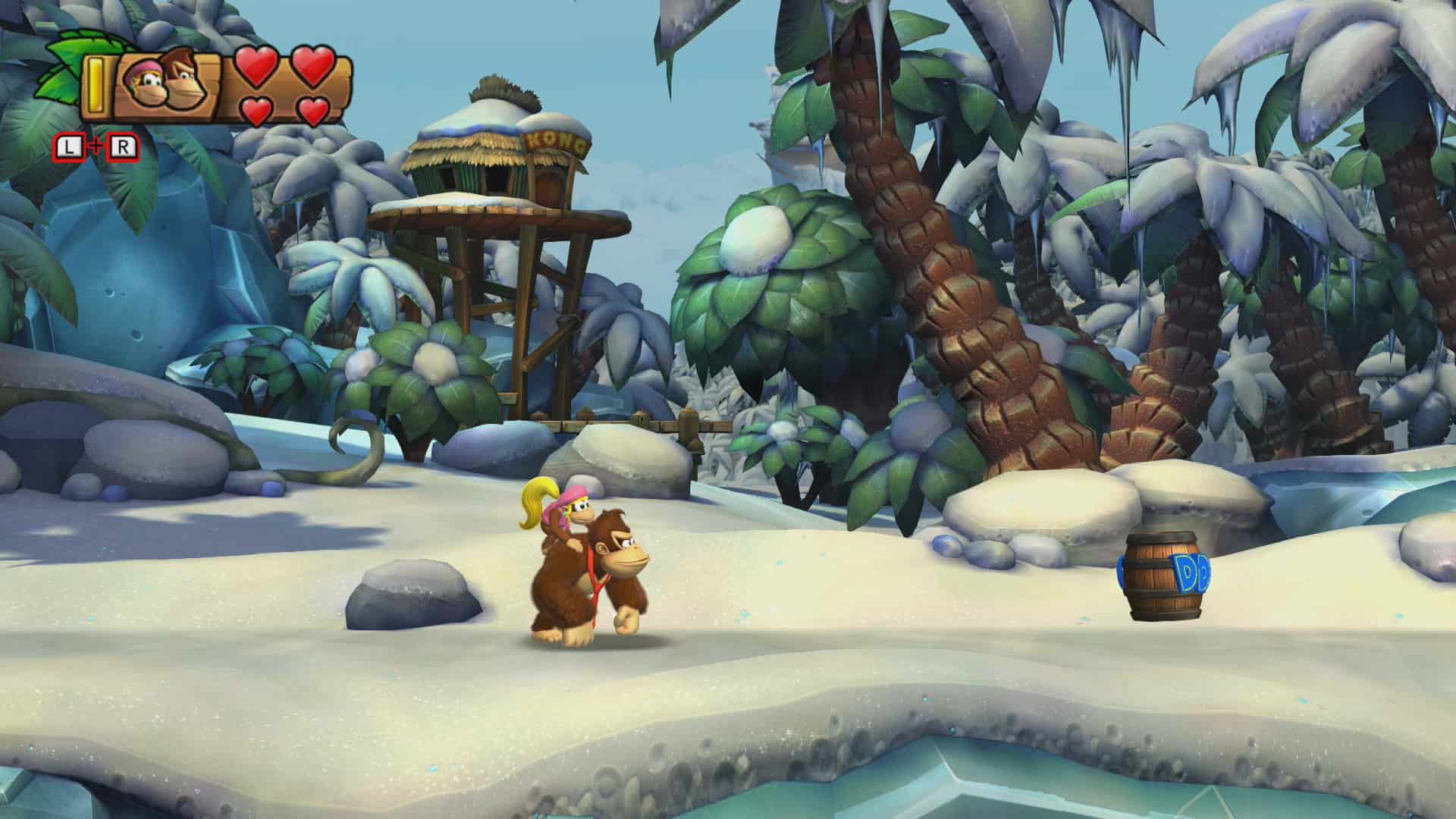 6-1: Homecoming Hijinx
At long last, you have made it back to Donkey Kong Island. It’s an emotional return as Homecoming Hijinx not only sets up what is to come as you work to reclaim your home from the Snowmads, but it also has throwbacks to Donkey Kong Country Returns. Donkey Kong’s house can be seen in the distance at the start, and, as you swing from icy glaciers, dodge frozen fish, leap between collapsing structures, it is clear that your arduous quest to save Donkey Kong Island is far from over.
Tags: Nintendo Switch Retro Studios
0 Shares
Share on Facebook Share on Twitter Share on Reddit Share on Email
Alex Seedhouse May 11, 2018