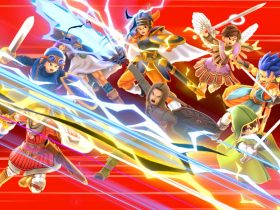 Jack is dead. I can be honest and say that it wasn’t entirely unexpected, seeing as mafia boss Christopher G. Sand had repeatedly left a scarecrow with a dagger stabbed through its eye outside Freeburg’s police department as a warning. But, I hadn’t wanted to become the mafia’s mole in the police department, which is a responsibility that deputy chief Francis Kendrick had pleaded with me to take on to save his family’s lives after being implicated in a corruption scandal. The photo that I was sent after I declined – that had shown their severed heads swinging on a ceiling fan – should have taught me to take the mafia and their threats more seriously…

This Is The Police embroils the player in a story of corruption, crime, and intrigue, where the result of your actions is never certain. You play as Jack Boyd who, having just turned 60, has been forced to resign from his role as the chief of Freeburg’s police department in light of the corruption scandal. With 180 days – or, six months – left in the job, he now looks to scrape together $500,000 as a retirement fund before he walks out the door for the last time.

The murderous outcome from not cooperating with the mafia is but one abrupt way that the story can come to an end, presenting an unpredictability that best sums up this management sim from developer Weappy Studio. As the gruff Jack Boyd, who is portrayed by Duke Nukem voice actor Jon St. John, you take the chance to read the headlines on the front page of local newspapers before driving to work each morning in a barely functional car. 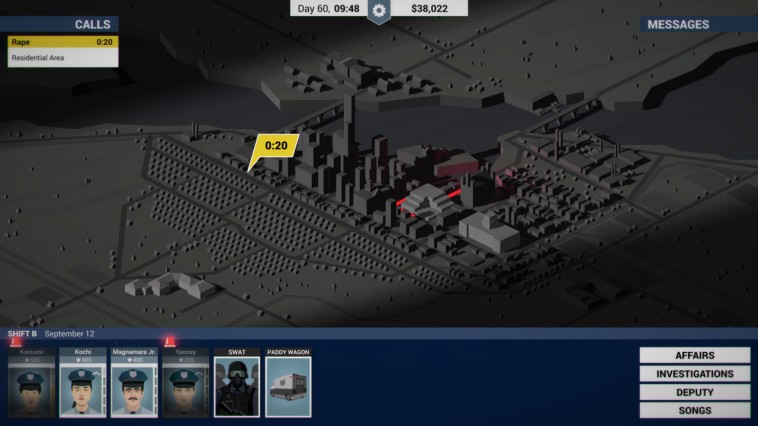 Part adventure, part strategy game, This Is The Police will see you select between multiple choice answers in press conferences, watch narrated cutscenes, and make momentous choices that will determine which path the story will tread. But, for the most part, you will manage the police force day-to-day – sending officers to respond to emergencies, and detectives to slowly piece together exactly what has happened at crime scenes.

That can see City Hall ask that you assign a police officer to make sure that no one brings handheld cameras into the city’s premiere of Back to the Future, see you respond to a hit and run incident to catch those that fled the scene, or even simply find that what sounded like a serious crime was a false alarm – with some assignments seeing your officers radio back to ask for guidance on how to handle a complex situation.

There are troubling scenarios to deal with, too. The mafia will regularly ask that you not send any police officers to crimes that they have planned for a monetary reward, the mayor is horrendously corrupt and will ask you to perform tasks that pander to his political ambition, and there is even an instance where City Hall demand that you fire all black employees in two days in response to mounting racial tension caused by a racist gang that is capturing black townspeople and beating them to death. 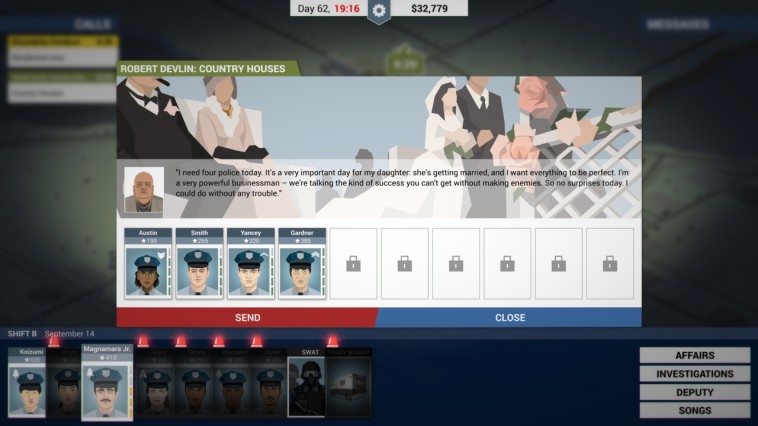 Your role in This Is The Police can often feel like an insurmountable task, but, I guess, that’s the point. After you are taught how you have officers and detectives that are split into two alternating shifts, that success in their assignments will increase their efficiency level, and that it is important to keep an eye on their energy level so that they don’t become less reliable, you will soon learn that some officers are lazy and will come up with excuses to take a day off – whereas others can become alcoholics, will quit to spend more time with their family, or even be killed while out on assignment.

It won’t come as a surprise, then, that you will be hiring and firing new officers and detectives to make sure that Freeburg’s police department has strength in numbers. You will want to force elderly officers into retirement, replace them with younger recruits, and nurture more efficient officers by promoting them. With increasing pressure each day, you do not want your workforce to thin out leaving you unable to send officers out on assignments, and that places some importance on keeping City Hall happy so that they don’t cut your budget.

The user interface is remarkably simple, any calls from the public to report an incident appearing on the left of the screen that you can open and then assign as many officers to as you wish. Sirens will wail and they then make their way over to the scene of the crime, spend some time there, and then make their return to the police department. With each assignment taking time, it’s down to you to manage your officers to make sure that you have someone to respond to each call. 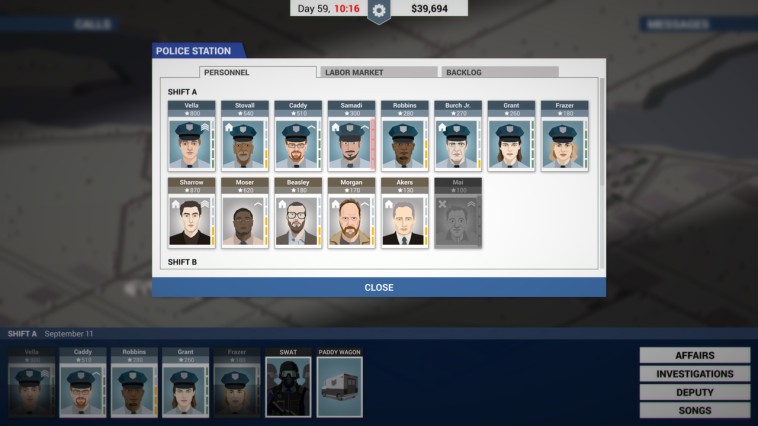 Your early hours with This Is The Police will entertain, but managing the police force can soon become tedious. Success or failure in assignments is unclear, with the player never having the chance to learn from their mistakes – even your best officers can manage to let a criminal escape, and even a percentage indication as to the chances of succeeding in an assignment would alleviate this criticism. Too many consequences can happen without explanation, which soon becomes a bugbear to the whole experience.

I would say that This Is The Police is at its best when the player is left to solve investigations that their detectives are looking into. These see them investigate the crime scene and interview witnesses, leaving the player with a collection of photos with which they have to work out which are correct and place them in a timeline in order to solve the case. And, at that point, you can then chase down and arrest the suspect.

The developer then tries to liven things up with lengthier, connected cases that can see you take down entire gangs, while, away from that, you can also call on services that the mafia can perform for a price – whether that be killing cops or detectives, or threatening prosecutors if your shadowy dealings ever come under scrutiny. It is an increased challenge that they look to hold your interest, such as your workforce refusing to go out on assignments alone when criminals in the city start cornering officers and beating them up.

This Is The Police is undeniably compelling, the player charged with watching over a city that is already spiralling the drain. As with how your police force is broken down, it is best experienced in shifts – otherwise risking the experience descending into monotony, which, we can all admit, is something that we already suffer enough of in our jobs out in the real world.