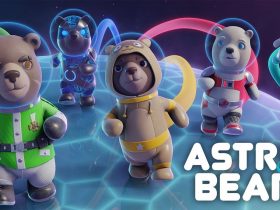 I feel like I missed the boat when it came to The Escapists games. For a number of years, I have seen them pop up on the various digital marketplaces but I have never been drawn in enough to take a punt on one, even though I have heard good stuff about them from various people. It seems logical then, that The Escapists: Complete Edition is probably the best way to go about rectifying this.

Upon playing, my first impressions weren’t the best. I will be honest about that. The game felt incredibly shallow, there wasn’t an awful lot I could do it seemed and nothing was explained (more on this in a moment). Therefore, because of this, I felt that I was right all along to hold off from playing. The longer I spent with the game, however, allowed me to see more of what it offered and it didn’t take all that long for me to understand just how much depth the game has, and just how much fun it can be.

You play as a prisoner but what crimes you committed to end up there is anyone’s guess, as it doesn’t build up that much of a backstory. Your main objective is to escape (shocking I know, given the title of the game) and there are a multitude of ways to do this. Each of the fifteen prisons featured in the game can be tackled in different ways, with varying degrees of difficulty. Later prisons get a lot stricter and have much tighter security, for example, thus making your escape that much harder. 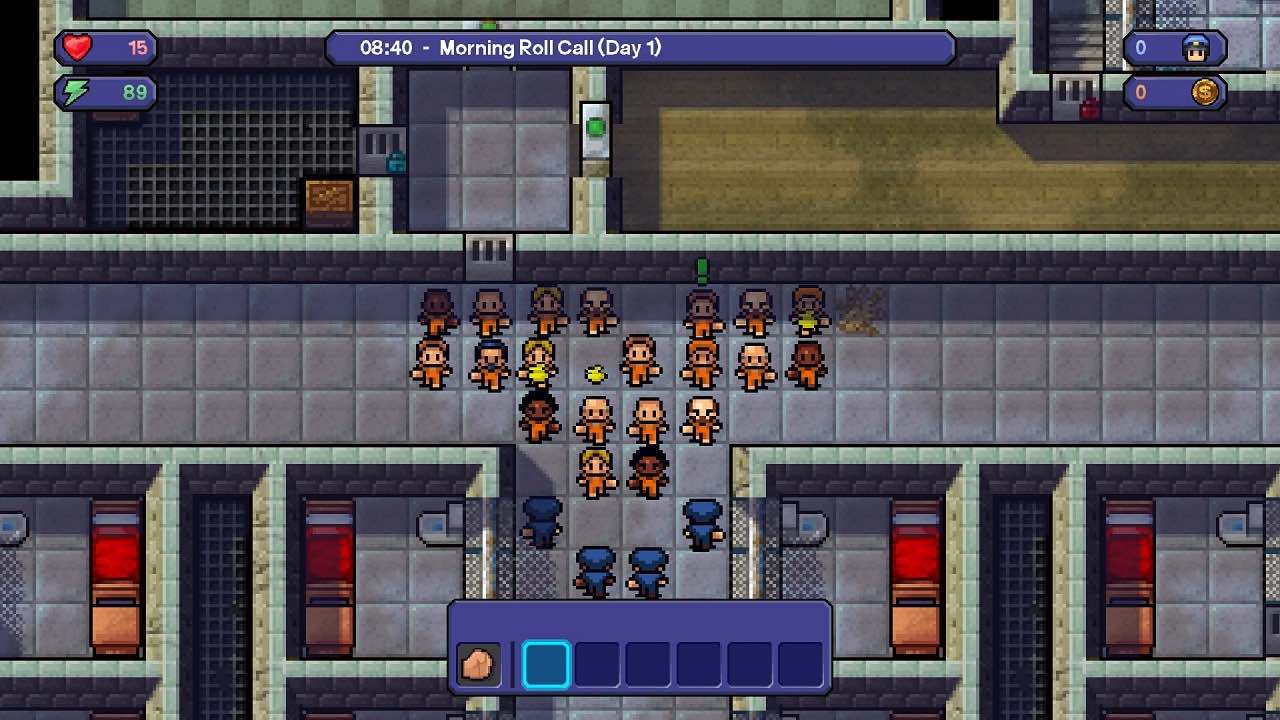 Each prison has its own schedule too, which you must adhere to. For example, the first thing that you wake up to is the morning roll call which you must be present for and then it is breakfast which you can skip. But, skipping it means you miss out on the food which, when eaten, prevents you from becoming fatigued. There are a few of these mandatory and semi-mandatory events that occur each day, but in-between them are free periods which will be where you do most of your dirty work such as assembling items and working out how you are going to escape.

It has been a complaint of mine, and many others for that matter, that some games force too many tutorials at you when you know you are more than adequate to know what you are doing. Here, it is the complete opposite, there is a tutorial in place, but it is very basic and doesn’t tell you half of what you need to know. For some, the experimentation that is therefore required might be a good thing, but when you literally have no idea of what the game allows you to do, it can be frustrating. Time is always ticking and you feel like you need to do something during certain periods of the day but end up just running around wondering what to do instead. Once you learn what you can do, The Escapists: Complete Edition soon starts to come into its own.

For this reason (and I don’t say this often) it might be a good idea to read up online on some elements such as the crafting system while playing. Without doing so, I am not sure if I was ever going to work out that I can make items such as a toothbrush or comb shiv by simply using a toothbrush or comb on a wall, because stuff like that doesn’t cross my mind unless I knew that was something that could happen in this game. There is a proper crafting system after all, so it makes even less sense that I can construct items outside of the crafting menu. The normal crafting system works as you would expect it to, where you can select up to three items which can then craft a whole new item that makes sense in the context of what you combined. For example, if you put down socks and a bar of soap, it’s obvious what the outcome of that will be, but there are so many different combinations and without looking it up, you simply have to guess what might work. 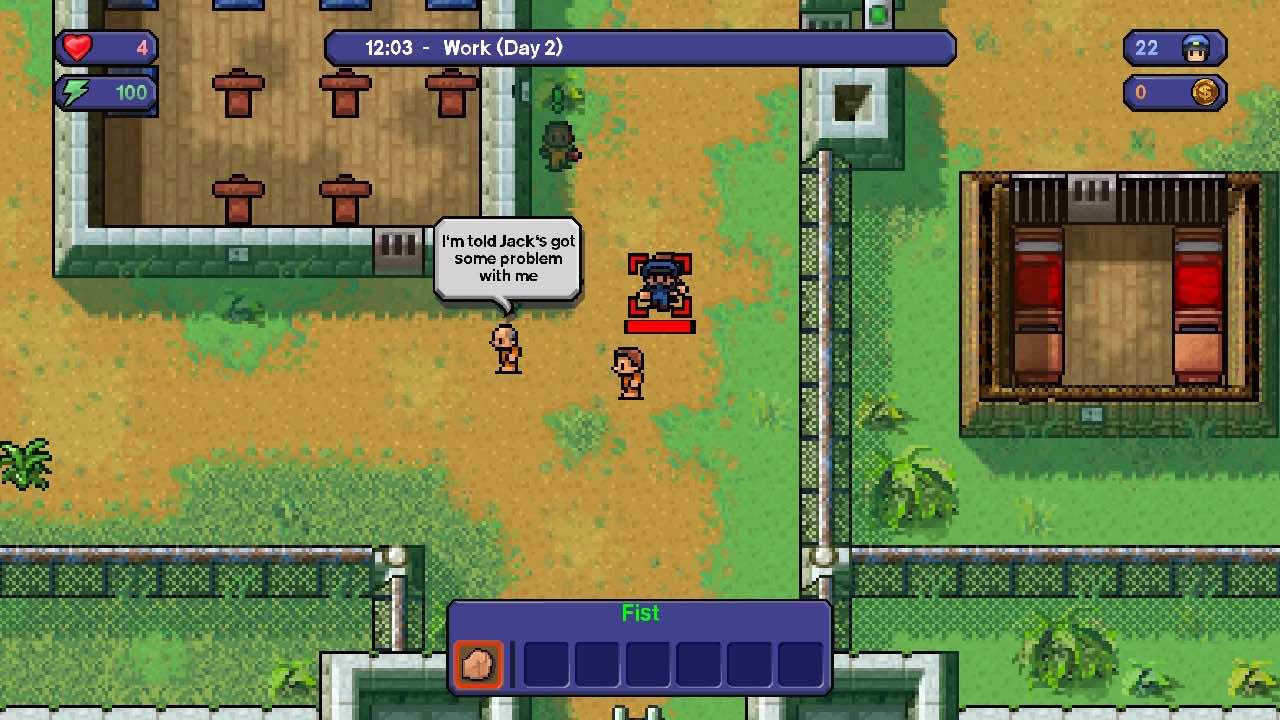 The main goal of the game, escaping, can be done in many ways as I said earlier. It is completely down to you how you do this too, but just because you escaped the first prison via one route, does not mean that will be the case for all of the prisons. Each will have easier and harder ways to escape and it’s down to you to figure this out. There are other elements in place that you need to think about too, such as if you start digging a hole but don’t have time to finish it all in one go, you need to cover it with something before the guards see. Likewise, if you are up to mischief in your cell, you can use bedsheets to cover up the windows so the guards cannot see in from the outside. There are many of these smaller details for you to figure out and again, not all of them are explained to you, you just have to work it out for yourself, but it helps make the game feel a bit more realistic, even if the rest of it is not.

There are plenty of things to do around the prison during the free periods that will eventually aid you in escaping. One of these requires you to do favours for fellow inmates and upon completion, you will be compensated back in cash, which can then be used to purchase useful items from other inmates. You could get a prison job in the metal shop and sneakily steal some metal, which can be used to craft all sorts of useful tools, like a shovel for example. Of course, the harder the prison is to escape, the more the extra things you can do become a necessity rather than simply being optional. I will say it again, it only emphasises the depth and all of these extra things to do, kept the game from going stale for me after a couple of prison escapes, as I was constantly trying different things and trying to escape in a different way than the last time.

The Escapists: Complete Edition is not a game that everyone will enjoy and I doubt it will be on anyone’s must-buy list. It suffers, to begin with, and you may think it’s a very one-dimensional sandbox game. But, give it time and it will show you just how much fun you can have planning a prison escape in an 8-bit world. The crafting system can be very much guesswork though as nothing’s explained, meaning that there is little to no indication on exactly what you can do. Having said that, once you start to work it all out, you then see just how much depth there is and coming up with a winning escape plan can be tons of fun. Plus, the included extra content in this version only sweetens the package for Switch owners.