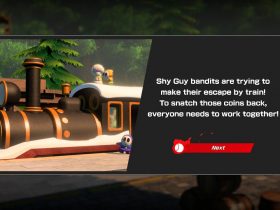 In this is a fast-paced arcade racing game, you will have the chance to race around in miniature toy cars on crazy tabletop tracks made from everyday objects.

That sees a sausage appear to be the size of a bus, a burger the size of a small swimming pool and dangerous toy scissors can cut their way through the middle of the track.

There are 20 toy cars to unlock that each has its own statistics, using power-ups to help you speed ahead of your competition and while playing in Career Mode, you can install upgrades and use paint jobs to change their appearance.

Super Toy Cars 2 will release on the Nintendo eShop for Nintendo Switch worldwide on 12th May 2020.