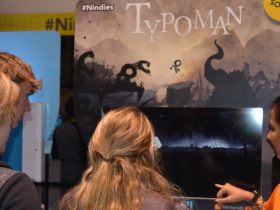 Interview: Brainseed Factory on exploring the power of words in Typoman

While some video games strive to be fresh and innovative, taking players on journeys through uncharted waters and experiencing new things, there are others that opt instead to focus on just having good, plain fun often heavily motivated by an existing brand or genre. Spend a couple of minutes with arcade shooter Super Destronauts DX and it’s clear where its inspiration lies, that all too familiar wave based assault of pixelated alien-looking ships doing their best to defeat you. While developer Petite Games has added their own flavour to this thoroughly tried and tested arcade genre, is it enough to hook players?

The general idea of Super Destronauts DX essentially boils down to manoeuvring your spaceship along the bottom of the screen, dodging enemy fire and destroying any brightly coloured sprites in order to accumulate points. String together kills and you’ll raise your multiplier and therefore your grand total. Whether you’ve played or even seen the original arcade classic Space Invaders or not, you’ll find yourself getting to grips with the game’s simple mechanics very quickly.

Enemies come in a number of flavours, their attacks varying in trajectory or behaviour. While you’ll deal with plenty of straightforward shooting enemies, as things progress you’ll suddenly need to contend with homing rockets and bullets that spread or even follow a wavy path down the screen. To help you deal with these brightly coloured bullies are temporary power-ups obtained via destroying special orange enemies. These reward the player with improved weaponry such as lasers that can fire through multiple enemies and bombs that explode on impact. 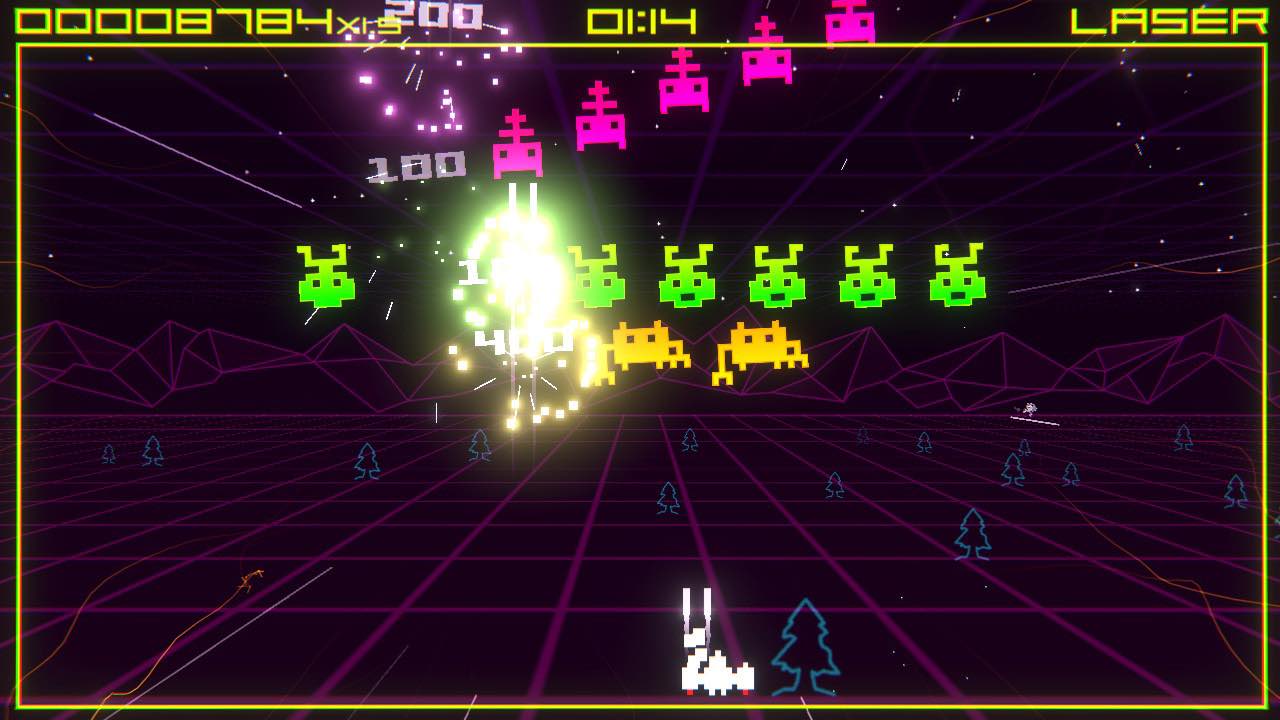 When certain enemies are taken out their ghosts will slowly fall toward the bottom of the screen offering ample chance to continue fire at them and gain more points. Still able to destroy your ship on contact and with the remaining enemies still hunting you down, there is a certain element of risk versus reward at play here as you decide whether to top up your score or focus on surviving.

Super Destronauts DX doesn’t try to reinvent the wheel when it comes to its premise, and from time to time for a game that’s totally fine. Sometimes we just want to sit back and enjoy ourselves with something warm and familiar. And while Petite Games’ arcade effort certainly acts and plays like many games before it, the biggest problem is that nothing about it excels nor gives it an identity. Playing games like Ikaruga for example, I’m often filled with a range of emotions – everything from the satisfaction of besting a boss battle to the excitement of dealing with countless white and black bullets to even the rage at falling at the final hurdle. With Super Destronauts DX I rarely felt anything leaning toward either negative or positive, my experience just sort of fine. This applies to the game’s presentation too; it’s visuals clean and colourful albeit lacking any real variation as you progress or even between modes.

Of the modes included, Challenge is perhaps the more interesting and unique feature the game has to offer, throwing you into a mix of thirty objective-based levels. Goals vary from simply reaching a target score or defeating a certain number of enemies to collecting enough power-ups or accumulating your multiplier. While a neat idea on paper, the goals seldom require you to alter your style of play, most simply achieved by shooting anything that moves with little thought to strategy. In fact, a general lack of difficulty meant that over the course of the thirty levels, rarely did I find myself having too much trouble reaching their requirements. Before I knew it I’d exhausted everything this mode had to offer. 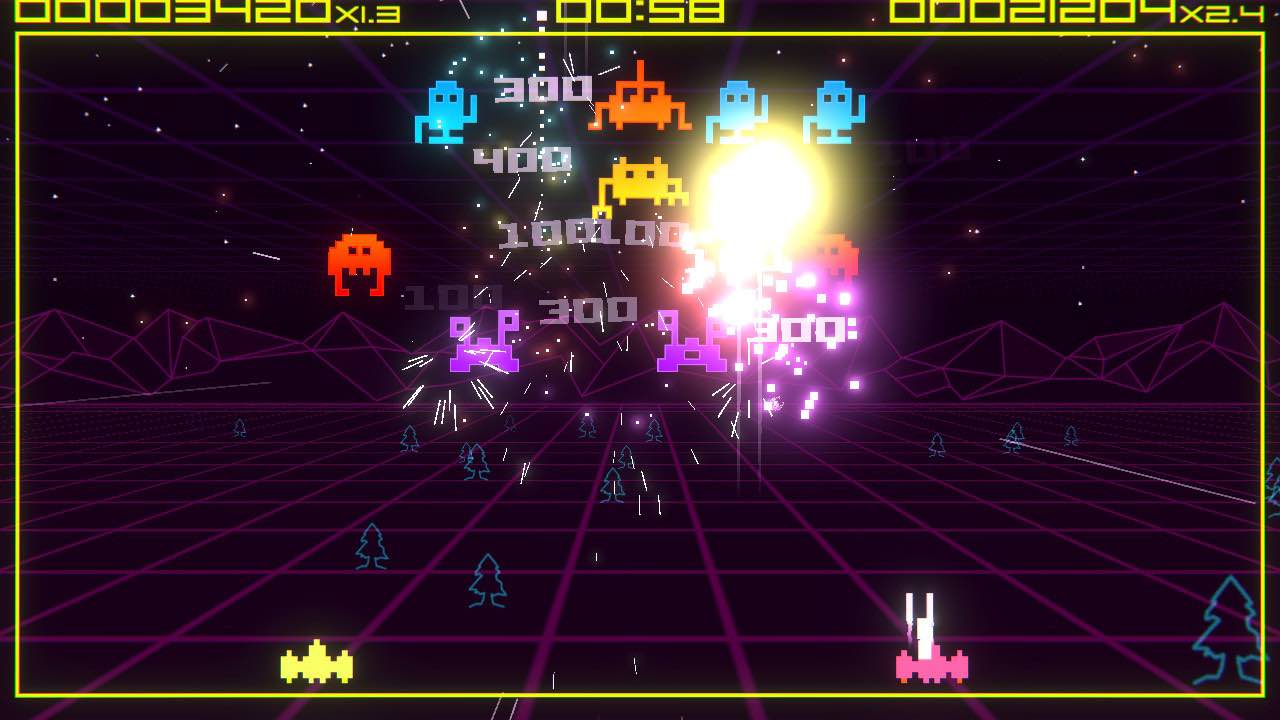 Classic Mode is your traditional arcade affair pitting you against increasingly tougher waves of enemies. Exhaust your three lives and its game over. Time Attack meanwhile gives you ninety seconds to score as many points as possible with no restriction on lives. Finally, Hardcore Mode throws you just a single life and ups the aggression of your enemies. Predictable as these modes are for a game of this genre, they at least work as ways to quickly jump and out if you only have a few minutes spare. Also if you’re into competing for the top spot in online leaderboards then Super Destronauts DX has you covered. The game also offers a two-player local multiplayer option as you work together to tackle the growing swarms and if you so choose, compete for the higher score. It’s a nice inclusion albeit one that merely distracted us for a few sessions.

Bottom line, there’s nothing inherently wrong with Super Destronauts DX – the game plays fine, looks polished enough and features numerous mode types. The problem I have with it though is that nothing about it shines and no part of the game has me eager to jump back in any time soon. Super Destronauts DX is a functional arcade shooter that’s distracting for a short while but with nothing truly helping it stand out in a growing sea of quality Nintendo eShop releases, it’s an experience easily forgotten.