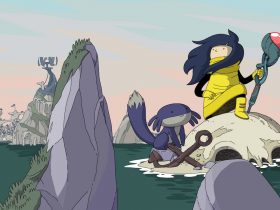 Minute Of Islands Coming To Nintendo Switch In Early 2020

Merge Games, Lemonbomb Entertainment, and rokapublish have announced that Stranded Sails: Explorers of the Cursed Islands will release on Nintendo Switch.

After you are left shipwrecked on a mysterious archipelago, this open-world exploration farming adventure will challenge you to work out how to survive, uncover the cursed island’s mysteries, and ultimately make your escape.

Taking inspiration from the Harvest Moon and The Legend of Zelda series, the game has been created around tilt-shift visuals, survival elements, exploration, and story-driven quests that will ask that you rescue your shipmates.

You will recover resources and plant crops, building your own farm to feed the survivors in your camp. The experience has looked to fuse survival mechanics with a far-reaching journey that will see you explore numerous islands.

Stranded Sails: Explorers of the Cursed Islands will release at retail and on the Nintendo eShop for Nintendo Switch worldwide in October.