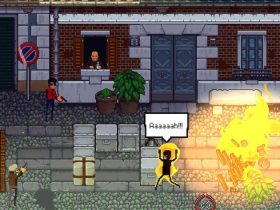 Hunt The Man Who Framed You In Milanoir On Nintendo Switch

Pull those socks above your knees and strap on a cotton sweatband, because Stikbold! A Dodgeball Adventure Deluxe is ready to leave a stinging red mark on your Nintendo Switch. So buddy up, and get ready to pump-fake the opposition in a somewhat harmless, but bizarre game of dodgeball.

Based in the 1970’s in a world where everything is groovy and dodgeball is life, Stikbold! A Dodgeball Adventure Deluxe is a multiplayer-focused party game that is very easy to pick up and hilarious among friends. The premise is simple, hit the opponent once with the ball to make them see stars, then whack them again to knock them clean out for the win. 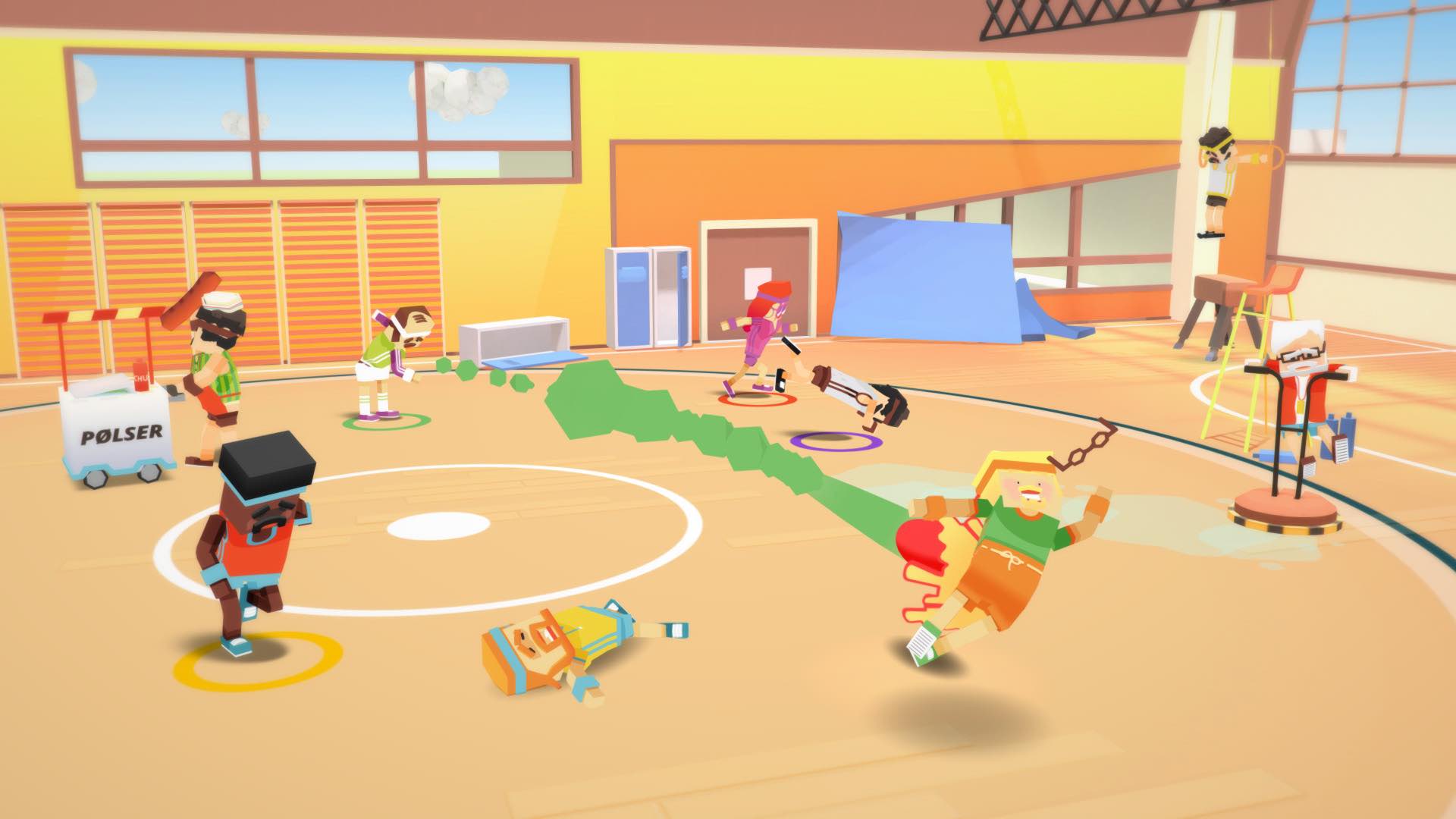 The only actions that you possess are throw, dodge, pass, and steal. Aiming can be done by either leaning your Right Stick like a twin-stick shooter or simply angling your Left Stick in the direction of your target if playing with a single Joy-Con. Having the benefit of two sticks does give you mobility benefits and a curveball opportunity, but, regardless of your set up, it’s all easy enough to get to grips with either way.

Before we explore the game’s main hook – the competitive multiplayer – I have to take my hat off to the somewhat short but rather hilarious Story Mode. You play as both Björn and Jerome (or either one in two-player co-op) who embark on a gnarly adventure to save their team rivals who have unfortunately been kidnapped by the devil. Your coach, on the other hand, embraces the moment, as this sudden turn of events can lead them to a possible victory by default. After all, your rival team did win the big trophy last season, making the old trophy cabinet look a little unbalanced as a result. Of course, our dodgeball-loving duo doesn’t see honour in a cheap victory, well… that, and the fact that Björn quite takes a fancy to female rival, Heidi.

To cut a brief story short, you pretty much cause havoc along the entirety of your journey. Whether it be beating a bunch of honey hippies, or throwing a stingball at the dad of a kid who’s inflatable whale you happen to steal, it is all randomly silly and quite hilariously written especially when it comes to the cleverly spoken gobbledygook language that accompanies the subtitles. There’s an obvious reflection of 70s comedy stoner act Cheech and Chong by how completely oblivious the despicable duo are to the world around them. It’s almost as if they’ve eaten one too many of those special Californian cookies themselves. 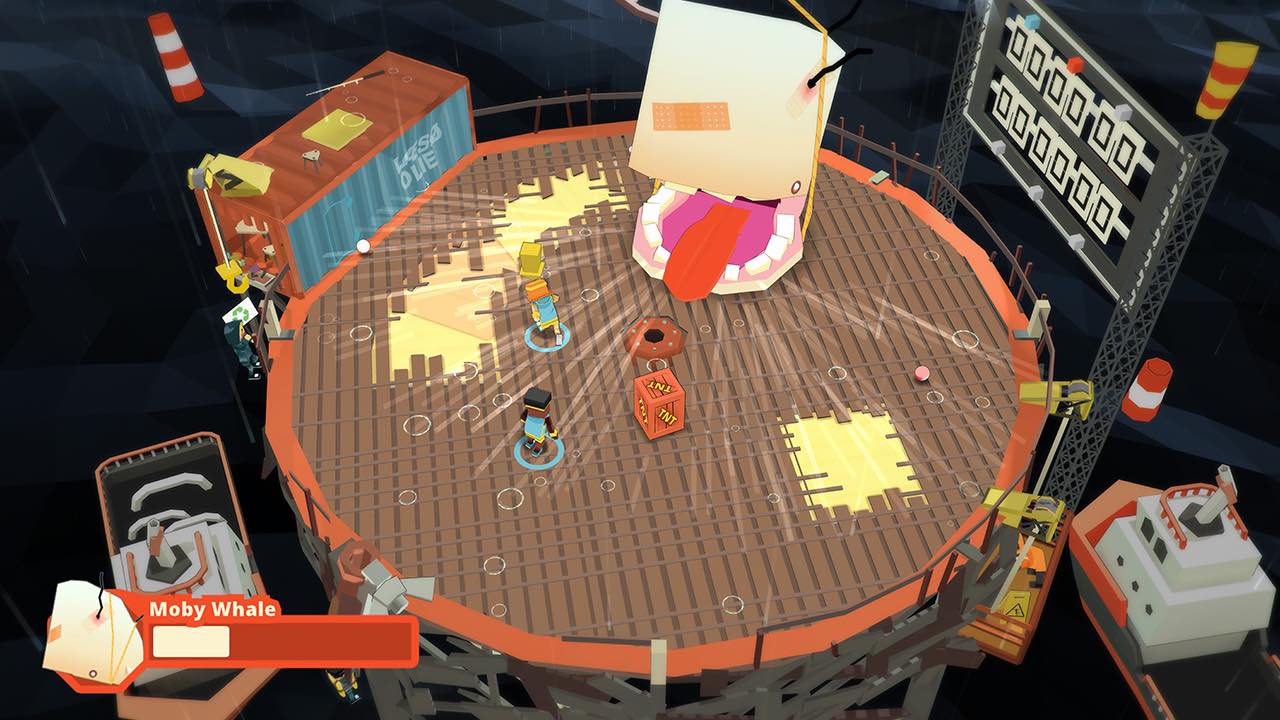 However, don’t go in expecting the usual string of matches against wacky opponents. The basic gameplay system is stretched beyond what I would have generally expected from a little title like this. With giant boss fights and hippy camper vans aiming to knock the stars off your head, to animal rights activists making a complete nuisance of themselves while protesting on top of an oil rig, it’s a fun little adventure that completely took me by surprise – with one certain moment in the latter half of the game that completely cracked me up in particular.

Of course, the core gameplay strength is found within the multiplayer component. Up to six players can slap balls across a modest five arenas with up to 18 characters to choose from. You can either play in teams of up to three, or compete in a chaotic free for all. Being a party game, each arena comes with its own hazards to disrupt the gameplay, from streakers wanting to cling onto your legs to a giant whale planting itself onto an unfortunate competitor. Even when you are knocked out, you can take the helm of a hazard to loosely stay involved with the action. It is all daft fun that adds to the chaos and can be adjusted to suit your preference for those who prefer to keep it clean and simple.

Speaking of party games, there’s a gameshow-style multiplayer mode called Wheel of Rumpus. Each player takes a turn to spin the wheel and play a small variety of mini-games for points. While breaking crates, dodging dangers, and popping balloons work fine in this mode, playing them individually can feel pretty boring. However, the additional soccer-style alternative complete with nets to score in does have a bit more bite, as it fits more closely to the core mechanics in Stikbold! A Dodgeball Adventure Deluxe. When a player gets a point in Wheel of Rumpus, they also win a prize to dress your character in silly ways. Once the game hits the final round, your points become lives, and the winner is the last one standing. It is a fun little addition that’s worth getting a group of friends involved in at least once. 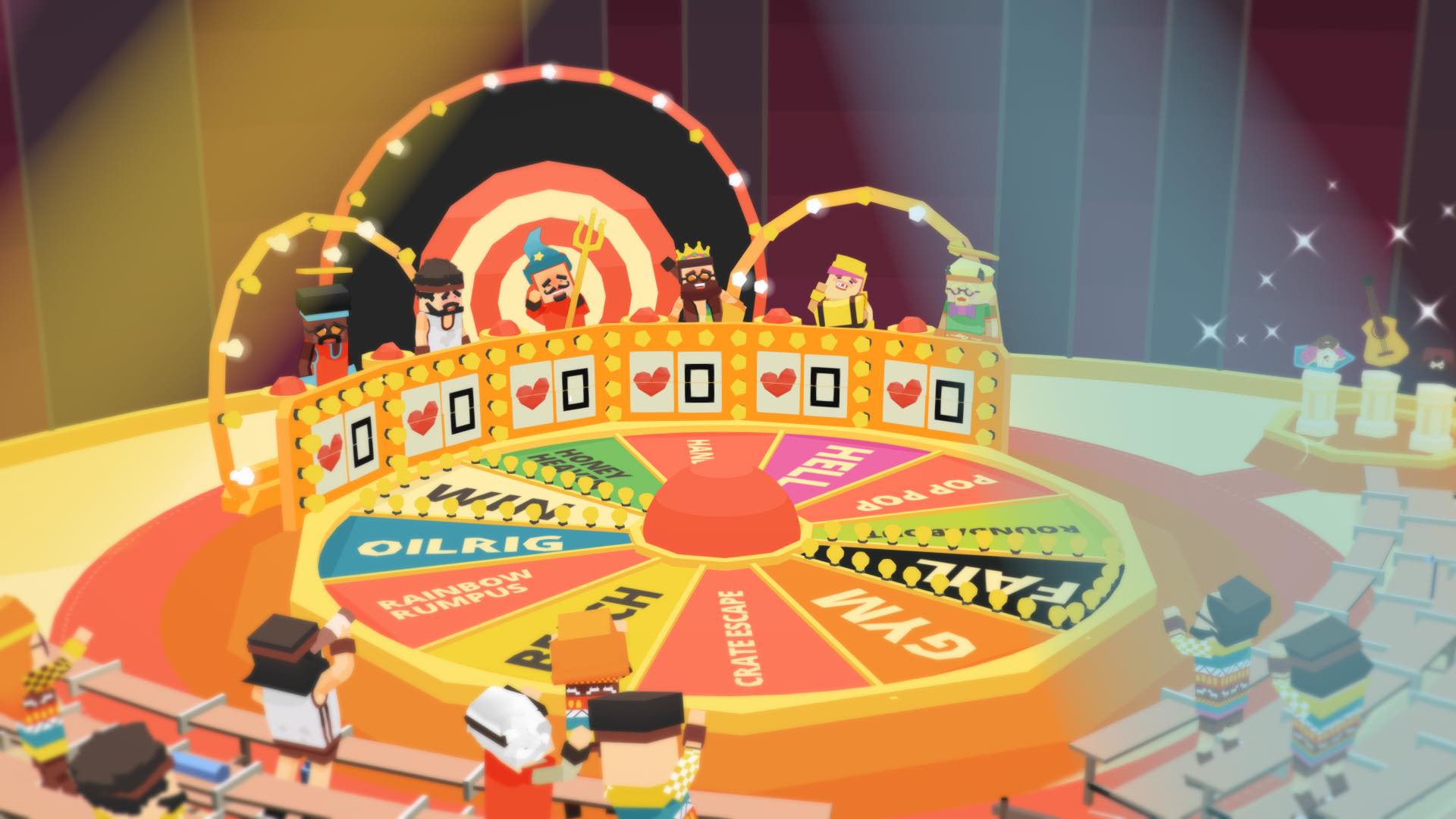 To look at Stikbold! A Dodgeball Adventure Deluxe, you would be forgiven to be tempted to disregard it on sight, as it does quite hold a resemblance to Crossy Road. Once I had played through the story though, all was forgiven. As it happens, the visuals fit perfectly in line with its comedic value, even if it does initially seem a bit on the cheap side. The music is also very catchy and mixes together well with the gameplay and visuals nicely. Just look at the little blocky dudes dance… adorable.

For those in need of a quick fix with a group of friends, then you can’t go far wrong with Stikbold! A Dodgeball Adventure Deluxe. The story is funny, the animations of the characters are charming, and the basic gameplay system is on point. If you are playing alone, then you may not get a lot out of this title due to how short the story is and the lack of online multiplayer. You can play against bots I suppose, but nothing beats slamming the wind out of a friend’s stomach.