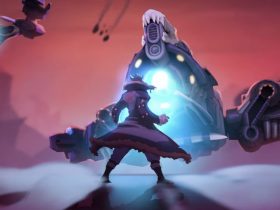 For a series to boast four completely different styles of gameplay within five games is something rather unique. The fact that they have all been pretty darn good is even more so, you could even say it is special. From what started as a tower defense game, shifted to a platformer, a turn-based strategy and then back to a platformer. Now we have SteamWorld Quest: Hand of Gilgamech, a role-playing card game, and I have to say, this is the best one yet.

SteamWorld Quest: Hand of Gilgamech opens up as a story being read by a father to his son. There is no real backstory here; it simply starts with two of our characters, Armilly and Copernica, strolling through the forest together, on a quest for a mushroom. Once the mushroom has been claimed, you then make your way back to the village, only to find it in flames as a result of an attack by some evil do-gooders, thus sending our heroes on their adventure to defeat them. Those that have played a SteamWorld game before not only know that it is a world full of robots, but also the kind of humor you can expect throughout – it never takes itself seriously. If you are expecting a serious kind of story, then you might be disappointed, but on the flip side, it makes many metal-based puns, something we can all get down with, I’m sure.

The battles are easily the best part about SteamWorld Quest: Hand of Gilgamech. They play out like a much better version of Paper Mario: Sticker Star, whereby the cards you choose, determine what action your characters will take, there is a lot more to this one though. You take three characters into battle, each with their own set of cards that are drawn out at random at the start of the fight and will refill after each turn. You then draw out three cards to perform during each turn and it can be from any combination of characters and any mix of Strike, Upgrade and Skill cards, providing you have enough Steam Pressure (or SP) to use all three during the turn (More on that later). 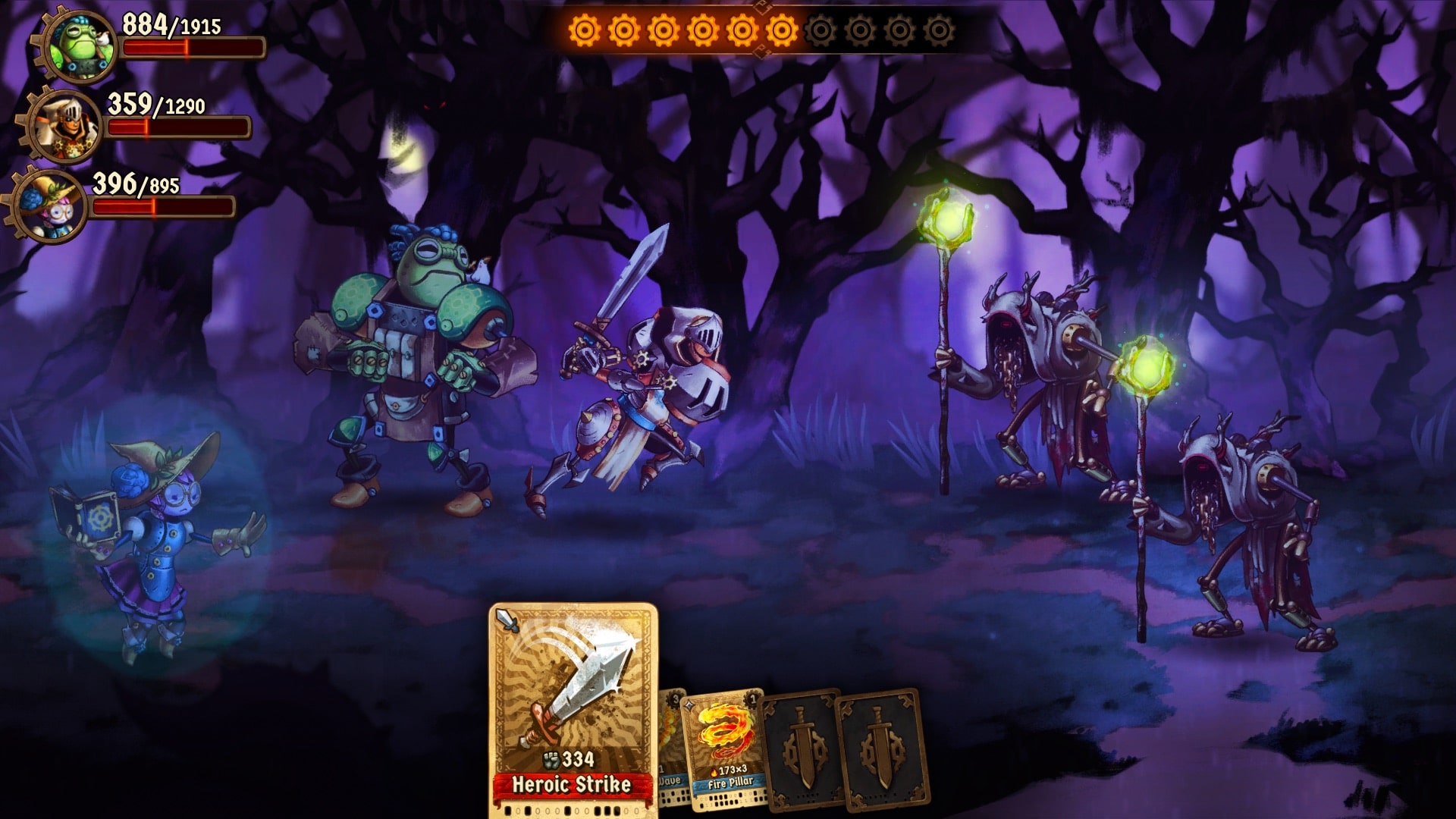 Each card can be categorized into these three types. Strike cards are your basic level cards that deal damage to the enemy. Upgrade cards give yourself some kind of buff, such as increased shields or higher damage for a few turns. Both the Strike and Upgrade cards are important for not only doing what they say on the card but because they also grant you SP which can then be spent on the Skill cards. Skill cards are the powerful cards, the ones that will win you battles. However, SP is the games way of stopping you from unleashing all of these cards at once. It is a bar at the top of the screen that fills up by one each time a standard card is used. So you must first use those first and then once you have built up enough SP, you can then skill cards.

Each attack you unleash will come in one of five different elements – physical, fire, frost, storm or arcane. Some enemies are naturally weak or resistant to particular elements and while some might be obvious, there is a handy bestiary you can view to find out for sure. It is handy to keep a note on what enemies are weak or resistant against what, as you might be in an area littered with enemies that are resistant against fire, for example, so ideally you don’t really want to be bringing fire cards into battle against these guys.

This is why sorting and arranging your decks will become such an important part of the game once you get a few hours in. You are constantly getting new cards and each one can be useful or not so useful in the right or wrong situations. Each character can only bring eight cards into battle and as mentioned above, some require SP points to use and attack cards have different elements attached to them. You need to be careful as to which cards you should be bringing along with you, as you might screw yourself over before you have even dealt your first card in battle. As mentioned already, SP points are gained through using the bog-standard cards so you know that you need to bring at least two of these along with you. It then doesn’t make sense to bring along seven other cards that require 4 SP to use, as realistically, you’re never likely to use them all, as you won’t ever have enough SP. Some only cost 1 SP, while others can cost 3 and 4 SP, so it’s about finding the right balance and seeing which cards work best for you. It is a very clever system and it makes it that much more tactical. 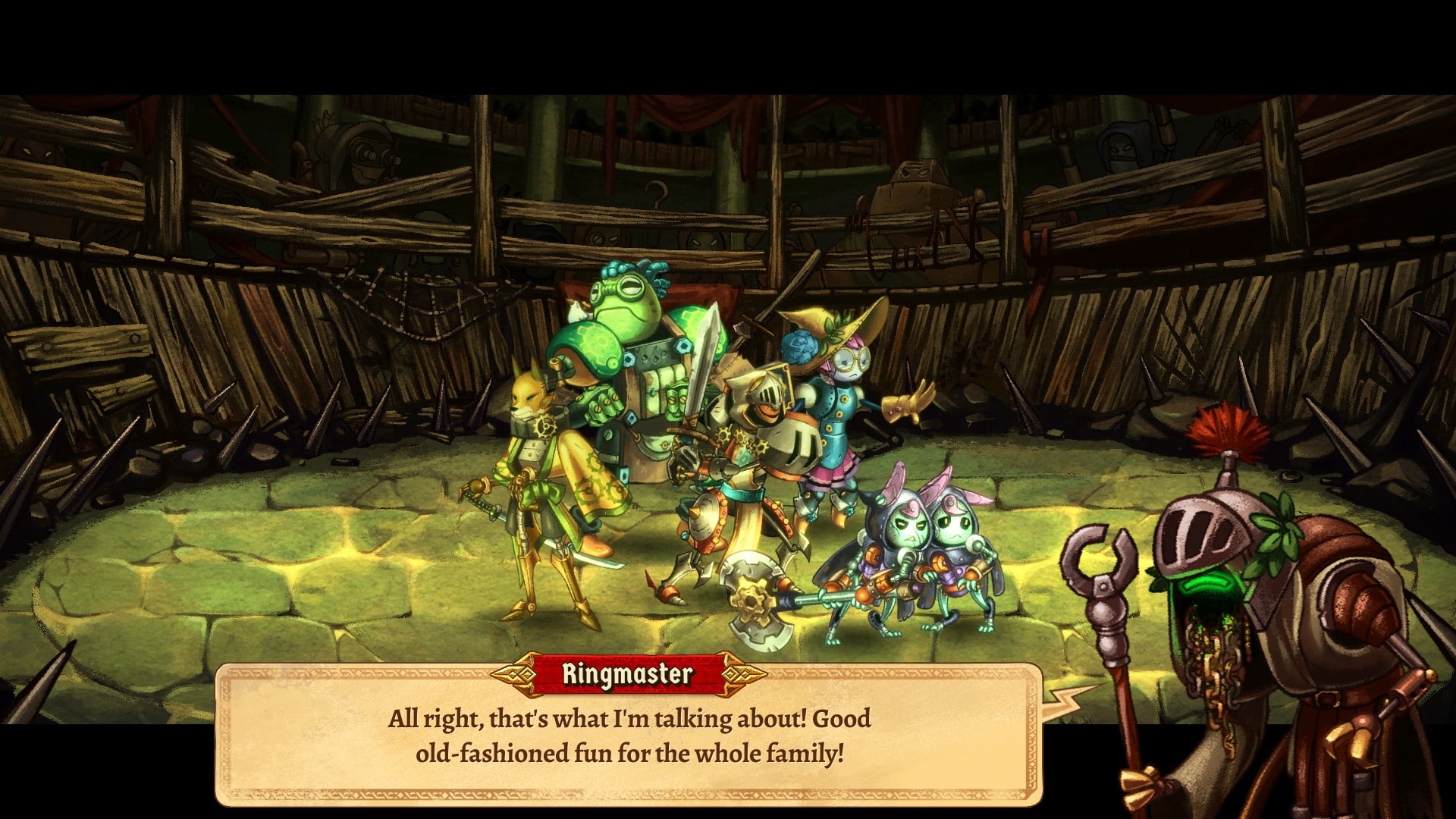 Some cards can even link with other characters, which gives you a bonus when you use it straight after a certain character. For example, there is a card for Galleo called Gigaton Punch, which by itself is an already powerful card, vindicated by the fact it costs 4 SP to use. That card has a bonus whereby if you let Armilly use a card immediately before Galleo, it will deal additional damage. It is always a good idea to keep checking each cards bonuses for this very reason, as it allows you to get the very most out of them, which will ultimately allow you to defeat enemies easier.

Outside of battle is where you will be looting gold, finding treasure chests filled with cards and equipment and searching for secret areas, which will undoubtedly house both of the previous. Truth be told, walking around outside of battle became the weakest part of SteamWorld Quest: Hand of Gilgamech for me, but that might be because I loved the battles and the deck management so much. It naturally meant that I simply wasn’t having as much fun, so it isn’t to say these sections are terrible, more so just not to the same standard.

Hero Statues will be where you heal your heroes, although doing so will mean that all enemies in the surrounding areas will return. This is both a good and bad thing. Good in that you are able to grind experience points off enemies, but bad because if all you want to do is heal, then you have to deal with the fact that you are probably going to get into fights again. This will cause you to lose health, meaning you will want to go back and heal and thus a vicious circle will arise. Hero Statues also allow you to save your game, but it is rather pointless when you consider that whenever you go through a door or move from one area to another, the game auto-saves anyway. 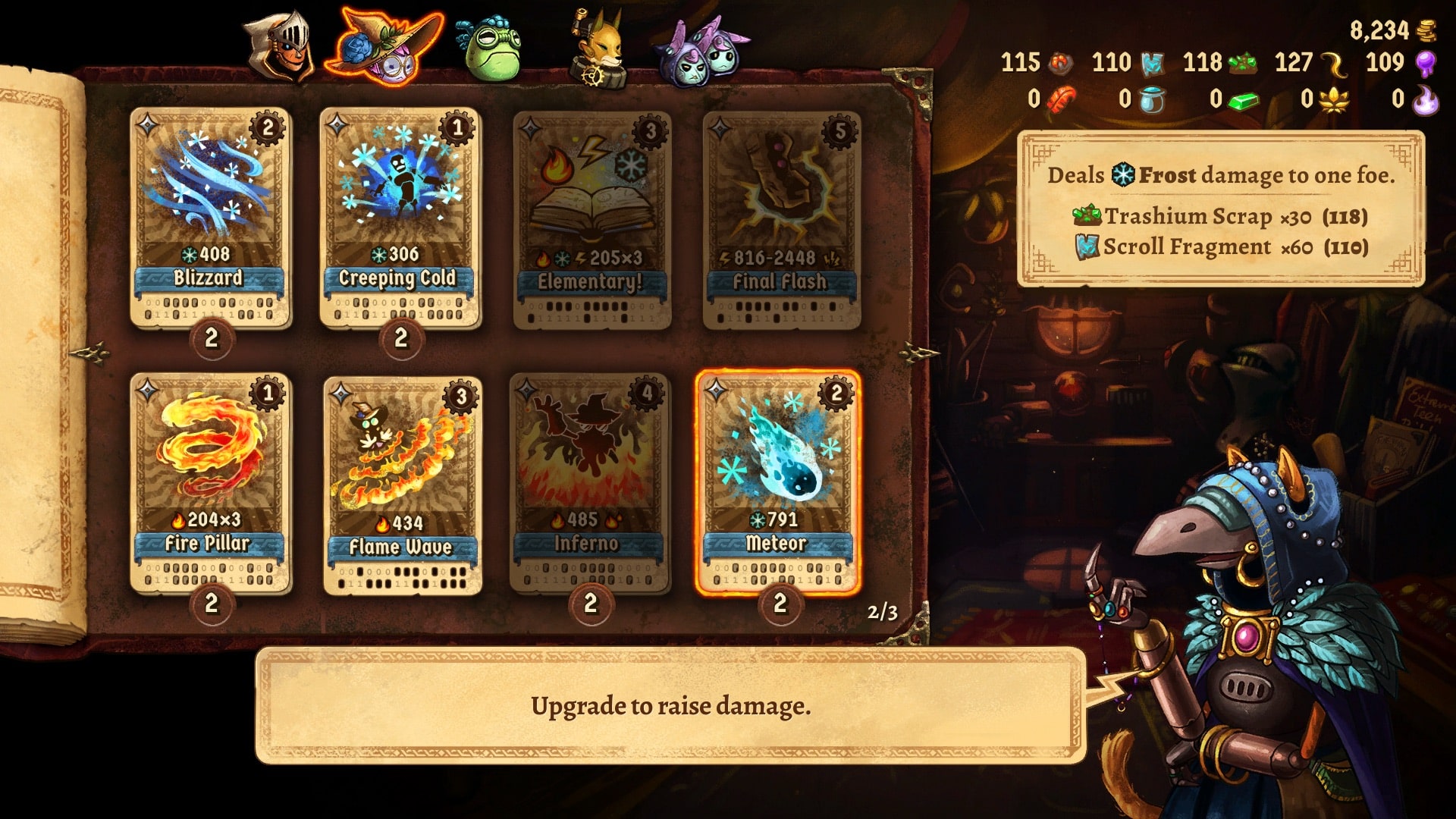 You will also meet the merchant from time to time, who at first will sell you items, equipment and even create new cards for each of the heroes. You cannot get these cards anywhere else in the world and are unique to the shop. A few hours in and the merchant will allow you to upgrade existing cards, which will either simply increase the attack power of your cards or add a benefit such as the Regeneration card being able to heal your team for an increased amount of turns. To buy or upgrade anything from the merchant, you will require a combination of gold and materials, both of which you gain when defeating enemies. Again, another reason why respawning enemies can be to your benefit. Infinite enemies equal infinite crafting materials, after all.

There is so much more I could talk about. The charming and differing personalities of all of the heroes. Pre-emptive strikes that allow you to gain an upper hand in battle before it’s even begun, Redrawing cards if you have been dealt a bad hand, the array of equipment you can get your hands on that can grant you all manners of good stuff, the hand-drawn graphics which ooze personality. I could go on.

SteamWorld Quest: Hand of Gilgamech was a title that I was eagerly anticipating, given the developer’s track record with the SteamWorld series, and the result exceeded my expectations. It is incredibly clever and it is clear that plenty of thought has been put behind each aspect. Not only is this the best title in the SteamWorld series, but it is also one of the best RPGs of any kind currently on the Switch. I simply could not put it down.