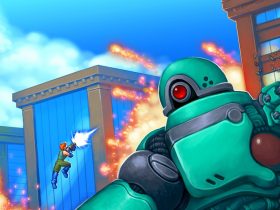 Raven Software had developed this third-person action game for the original Xbox and PC, which was first released back in 2003.

After customising your character, you enter the Jedi Academy as a new student who is eager to learn the power and dangers of the Force from Jedi Master Luke Skywalker.

You will have the chance to construct your own lightsaber from handle to blade, and, as you progress, will unlock the chance to wield two lightsabers or the double-bladed lightsaber similar to the one that Darth Maul once carried.

It’s your choice whether to fight for good and freedom on the light side or follow the path of power and evil to the dark side, but, beyond this, the game is remembered for its classic online multiplayer.

This sees up to 16 players battle it out in six multiplayer modes that include Free For All, Duel, Power Duel, Team Free For All, Siege and Capture The Flag.

“Today, we’re thrilled to announce the return of a long-awaited Star Wars classic to new platforms,” enthuses Elizabeth Howard, vice president of publishing at Aspyr. “We know fans have been anxiously awaiting for the game’s arrival, and look forward to seeing the battles ensue online.”