The Splatoon 2: Octo Expansion is incredible. Or inkredible, even, if I were able to stay as fresh as the Inklings that loiter around Inkopolis Square. After freely throwing new stages and gear in our direction while restocking Ammo Knights with ink-based weaponry to let Sheldon have a regular chance to nerd out at us, this hefty single-player campaign becomes the first paid downloadable content for the turf-splatting Nintendo Switch exclusive.

“AHOY! OCTOLING! Up and at ’em, ya lazy whiffle-whaffle! This fight ain’t over! Prepare for a royal whoopin’!” In this expansion, you play as Agent 8, an Octoling who, after waking up on a subway platform to find Cap’n Cuttlefish angrily shouting in their face, must overcome challenges in an underground test facility as they look to recover their lost memory. Cap’n Cuttlefish can remember that you were battling his protégé, Agent 3, in Octo Valley, when you were suddenly attacked by someone. But, as to how you both ended up underground together remains a complete mystery.

With a temporary truce called as you work together to make your escape, a brief tutorial section sees Cap’n Cuttlefish, as your guide, talk you through the basics. That starts with the need to recover a key to unlock an Octarian vault and technological contraptions that will equip (and confiscate) you with weapons, and soon sees you stumble upon an ominous, talking telephone. 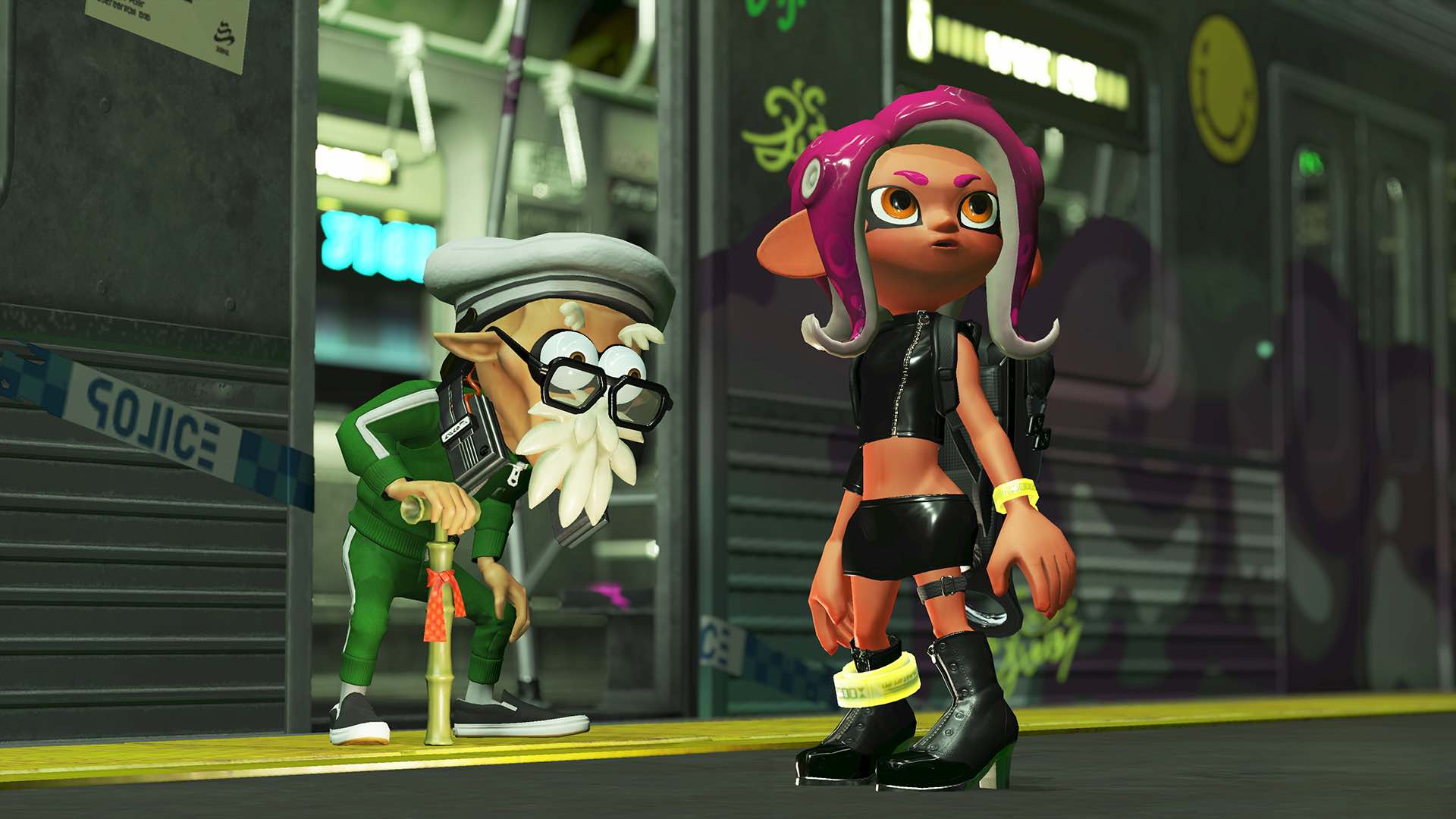 It explains that you are in the Deepsea Metro Central Station, the antiquated device revealing that its primary function is to facilitate your journey to the promised land. After realising it isn’t communicating effectively with you, it enables contemporary speech mode and blurts out: “What is crackalacking, home skillet? Let us bounce to the promised land fo sho.” That’s too fresh, even for me. Nintendo’s localisation team has clearly had tremendous fun writing these character interactions, and, without a doubt, I haven’t smiled and laughed this much at a game in a long while.

Back to business, though. You are applicant 10,008, and, handed your CQ-80 and CQ card, you are told to hop aboard the Deepsea Metro. It’s here that the subway train’s humble conductor – a sea slug called C.Q. Cumber – explains that you are in a vast underground facility operated by the Kamabo Corporation. To reach the promised land, you will need to pass a series of test chambers that are connected by the subway system. You are also challenged to collect four thangs that, once returned to the mysterious telephone, will open the door to the promised land.

Your mission is clear, then. There are 80 tests to complete, that you must battle your way through to reach the surface of Inkopolis. You will need to spend the CQ points that you accumulate to take each test, swiping your CQ card at a turnstyle before leaping into action, with more points as a reward for passing them. You have three lives with which to complete the test, with failure presenting the chance to use more CQ points to continue from your last checkpoint. Fail enough times and Marina can use the accumulated data from all of your attempts to trick the system into thinking that you have already cleared it. 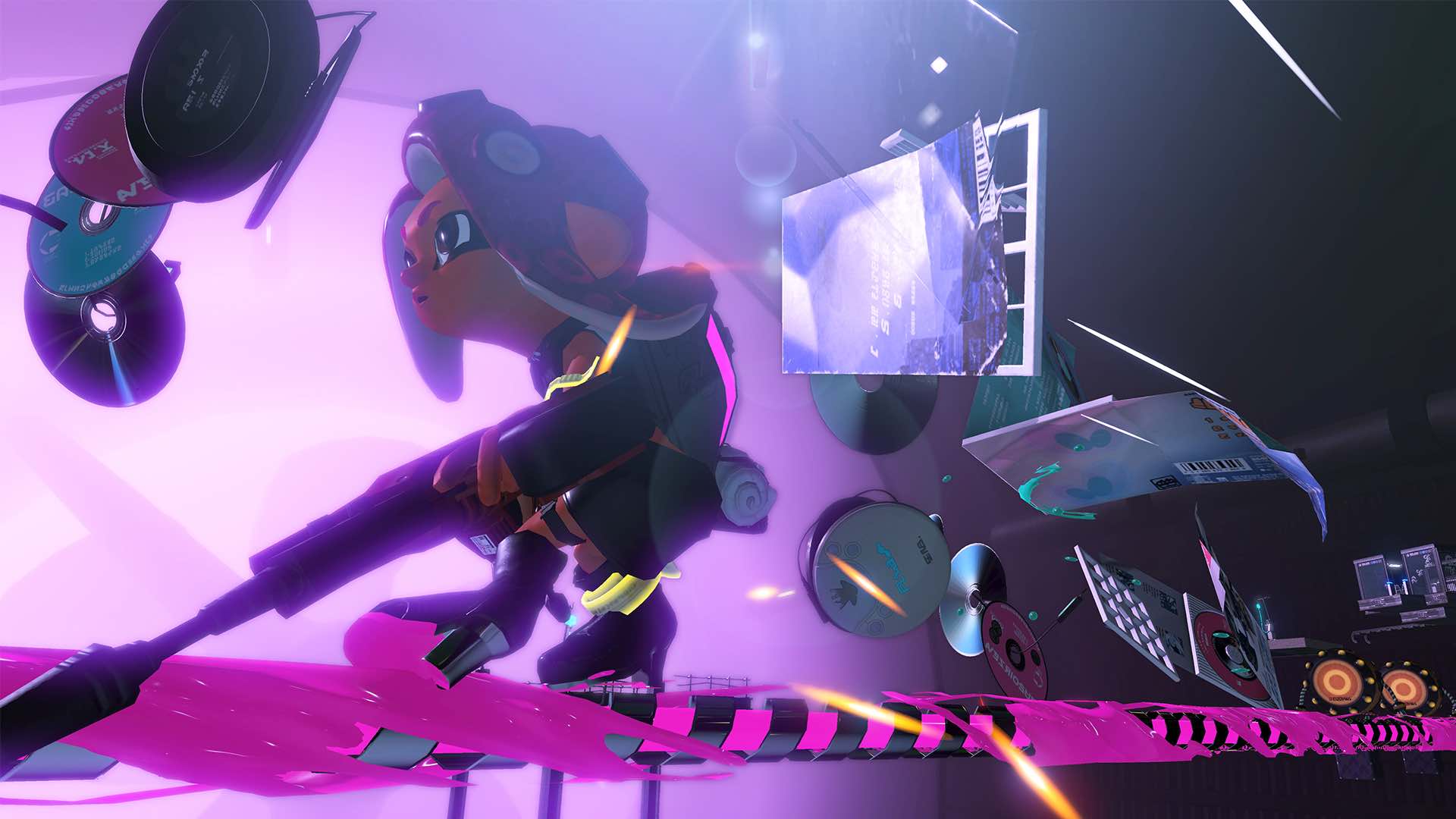 You will be challenged to guide an 8-ball to the goal, pop balloons while riding on rails, defeat an enemy Octoling team, make it 30 seconds without taking any damage or even shoot out crates to match the stack next to them. Where foiling the Octarian’s plans in Hero Mode had served as an introduction to the game’s basic weapons, these tests are far more mischievous and devious in that they challenge you to use the weapons, sub weapons and special weapons that most players would find the hardest to splatter their targets in ink with.

The tests are often difficult, sometimes perplexing and, on occasion, seemingly impossible, but there’s an addictive undercurrent to the whole experience that never makes it feel as if success is too far out of reach. Of course, that unrelenting desire to overcome every test also comes in the fact that completing the Splatoon 2: Octo Expansion rewards you with the chance to play as an Octoling in online multiplayer – the strongest motivation for you to beat every test in the shady underground facility.

That’s not your only in-game reward, either. The Kamabo Corporation will also award you Mem Cakes to commemorate each test that you pass – small collectables that we’re told are formed by compressing memories into physical form. These can be traded with Iso Padre aboard the Deepsea Metro, who will hand you new Octoling gear to wear once you reach the promised land – your chance to show other players that you have conquered every test.

It’s hard not to come to the realisation that Splatoon’s world is such a brilliant place to exist in. There’s the hypnotic soundtrack, rib-tickling writing, quirky characters that you meet on the Deepsea Metro and the inventive tests that you must overcome. It’s also packed with references. Those come in the Game Boy Color, Super Nintendo Entertainment System and GameCube that hover in the distance when tackling tests, but even on your CQ-80 when looking at the Deepsea Metro Map. The stations are crammed with unexpected nods to pop culture, whether that be film, music or games – “Ink-a-zig-ah…” at the Girl Power Station, for one.

The Splatoon 2: Octo Expansion never lacks in the sheer spectacle of its creativity. It’s Nintendo at its best, for sure, taking what we have come to expect from Splatoon 2’s core experience only to throw the rulebook out the window to astound with freshly inked ideas. More, please.