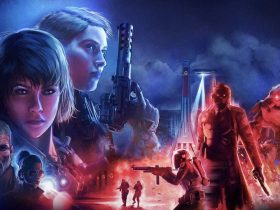 Slime-san is a single-screen precision platformer from developer Fabraz that pits you up against 100 challenging and fast-paced levels that are each split into four rooms. You play as Slime-san, a little ball of green goo that has been devoured by a giant worm. Using your wit, coordination and jumping skills, you aim to make it out of the wretched invertebrate alive before getting consumed by its stomach acid.

The first thing that you notice from this title is the similarities it holds to legendary indie platformer Super Meat Boy. You aim to get to the goal using exceptionally tight controls, collecting apples instead of plasters, and you leave a trail of slime instead of blood. The control system does vary between both games but at first it’s easy to see Slime-san as a clone of the tough as nails 2010 platformer. Slime-san does bring its own identity to the table though, and not just because of its 80’s home computer style visual looks.

The first few levels help you get to grips with Slime-san‘s unique abilities that you will learn to master as you progress. Besides the basic movement and wall jumping that you expect to see in this type of game, you also have the ability to dash that speeds up time slightly as well as to slime through green walls which, in effect, causes time to slow down. 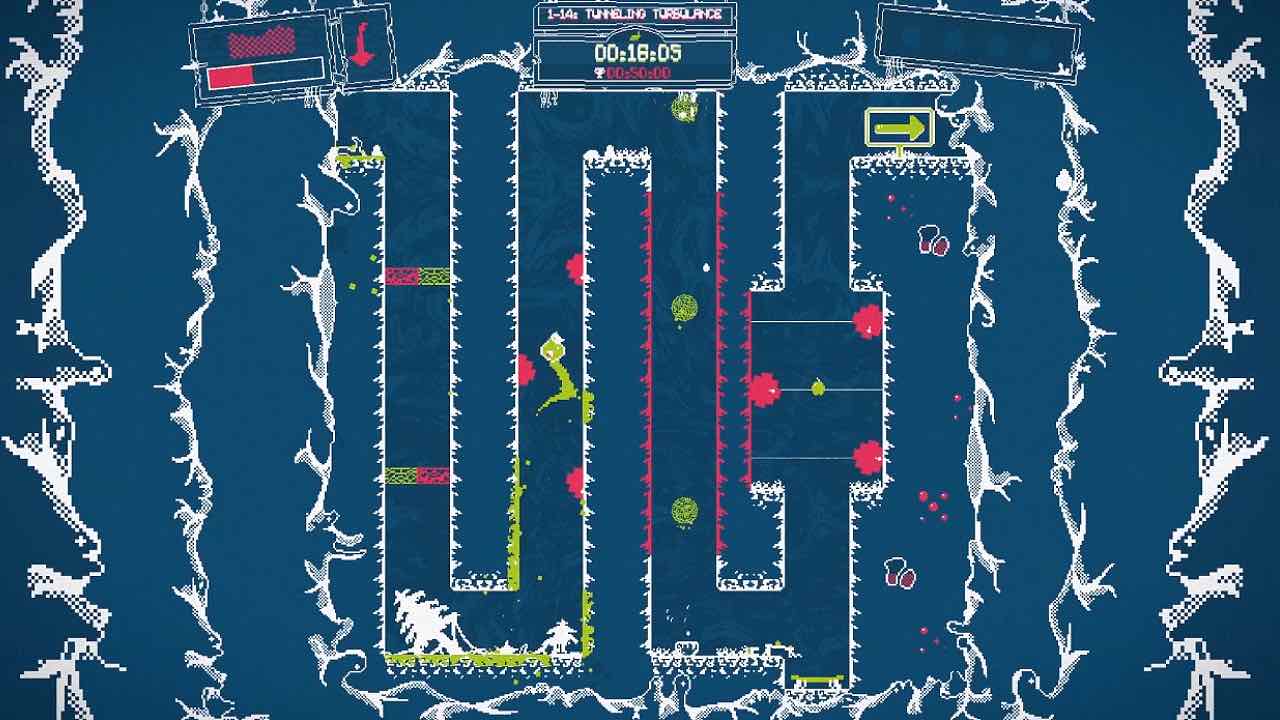 This leads to testing your multitasking and coordination skills as you combine these unique abilities together in a similar vein to rubbing your belly and patting your head. There’s also a little bird as your sidekick that gives you a visual clue when you have a jump available. As the levels progress, your abilities begin to also manipulate your interaction with the environment – setting you up for some tricky yet interesting platforming. The amount of environment mechanics that get thrown in the further you get are plentiful and diverse, rarely being overused and giving a somewhat slight Super Mario Galaxy feel to how these elements are implemented.

Most levels are built up of single-screen platforming conundrums that are displayed at a 1:1 screen ratio. Speed is the key to get to the exit as a timer in the top left-hand corner shows how long you have left until the stomach acids start to fill the screen to digest you, thus creating a constant sense of urgency. Mix that in with instant restarts, apple collecting and seamless transitions between levels and before you know it, you realise you haven’t even blinked once for the past 20 minutes of gameplay.

It doesn’t take long to realise this game is hammered with content. Like stated above, the main campaign has 100 levels spread over four segments. Each level is split up into four rooms that you have to beat in succession in order to move forward, with each segment ending with a boss battle. There’s also a New Game+ mode that can be unlocked when completing the main campaign that remixes every level and makes them even more challenging, giving you a whopping total of 800 rooms to slime through.

There’s also Slumptown that you can visit where various animals that have been swallowed up have taken refuge. They make the most of the situation by opening up shops where you can use your collected apples as currency. From here you can unlock various characters with different play styles that will enhance one ability but handicap another – possessing the ability to double jump but lose your ability to dash, for example. 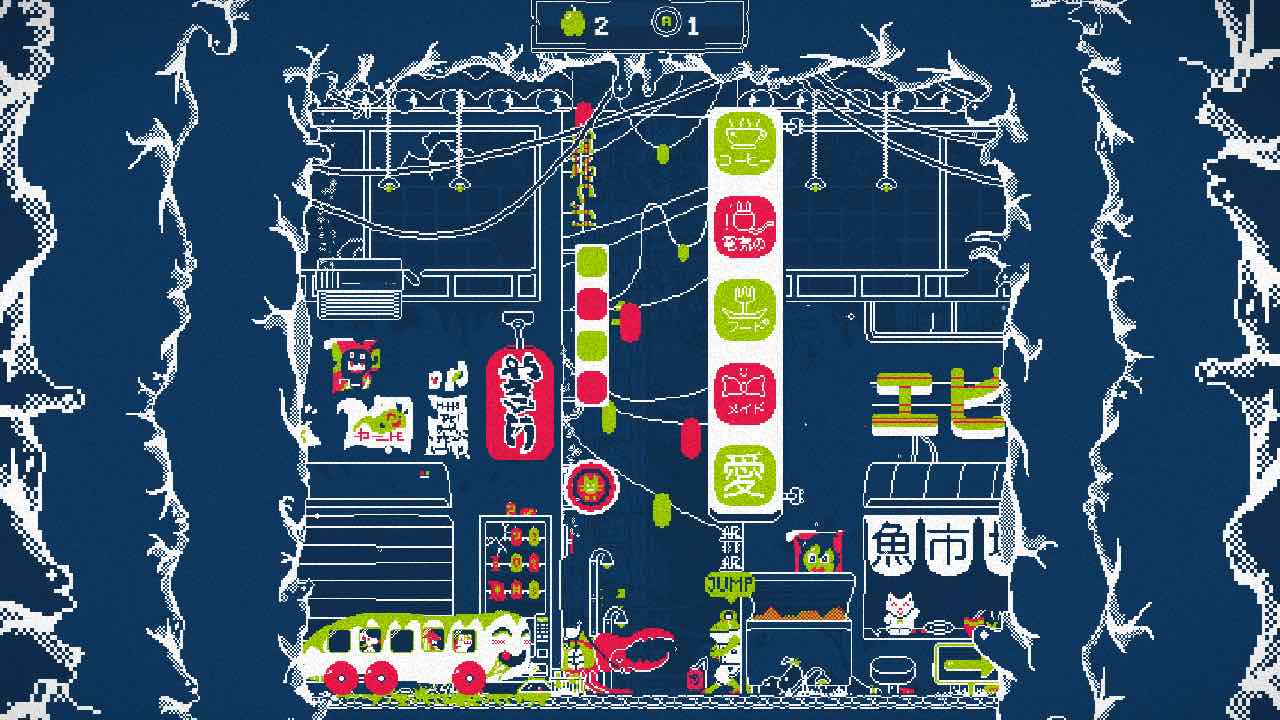 Abilities are not the only things that apples can buy, though. You can purchase various cosmetics for your character and sidekick as well as artwork that borders your screen. There are even several shaders that you can purchase to give you different filtered styles that resemble a look of a Game Boy, dodgy VHS tape or Arcade-style scan lines with added ghosting effects among others. I’m a big fan of screen filters. It was something I was excited about with the NES Classic Edition and to include it in this game is a nice touch. However, despite the fact that you can change the effect between mild and extreme it does hinder its visual practicality as it completely blurs text and certain visual landmarks making them almost unusable. It would have been great to have the option to fine-tune these effects manually.

Apples are not the only form of currency found in Slime-san. There are also coins hidden in various levels that allow you to purchase games from Slumptown’s local Arcade. There’s three of these to unlock that play on classics such as Pong, a top-down shooter and a 2D Zelda-inspired brawler. You can also buddy up with a friend locally to play these if you desire. The PC version does include an extra two games as a parody to Mario Kart (Krazy Karting) and Doom (Gloomy) that are absent from the Nintendo Switch release. I did reach out to Fabraz to see why these aren’t included, to which they kindly informed me that there were some issues in development meaning that they had to be cut from the Nintendo Switch release. Although, they do aim to add them with the free Blackbird’s Kraken downloadable content in the future.

The team behind this bouncy little platformer have undergone a challenging task of only using a five colour palette to enforce its visual flavour. For the most part, it does give it a personality and character that almost time warps you back to the ZX Spectrum era.

The choice in this visual path does lead to some discrepancies, though. Despite the imagination that’s gone into the level and the Japanese-inspired Slumptown design, there’s an unremarkable sense of déjà vu as the limited colours make the levels look very similar to one another – especially because there are so many of them. It’s strong green and reds can be a little hard on the eyes if your TV is bright, particularly within Slumptown that can turn a mild headache into a booming migraine. However, I had no such issue when playing on the Nintendo Switch undocked, to which this game does fit incredibly well. 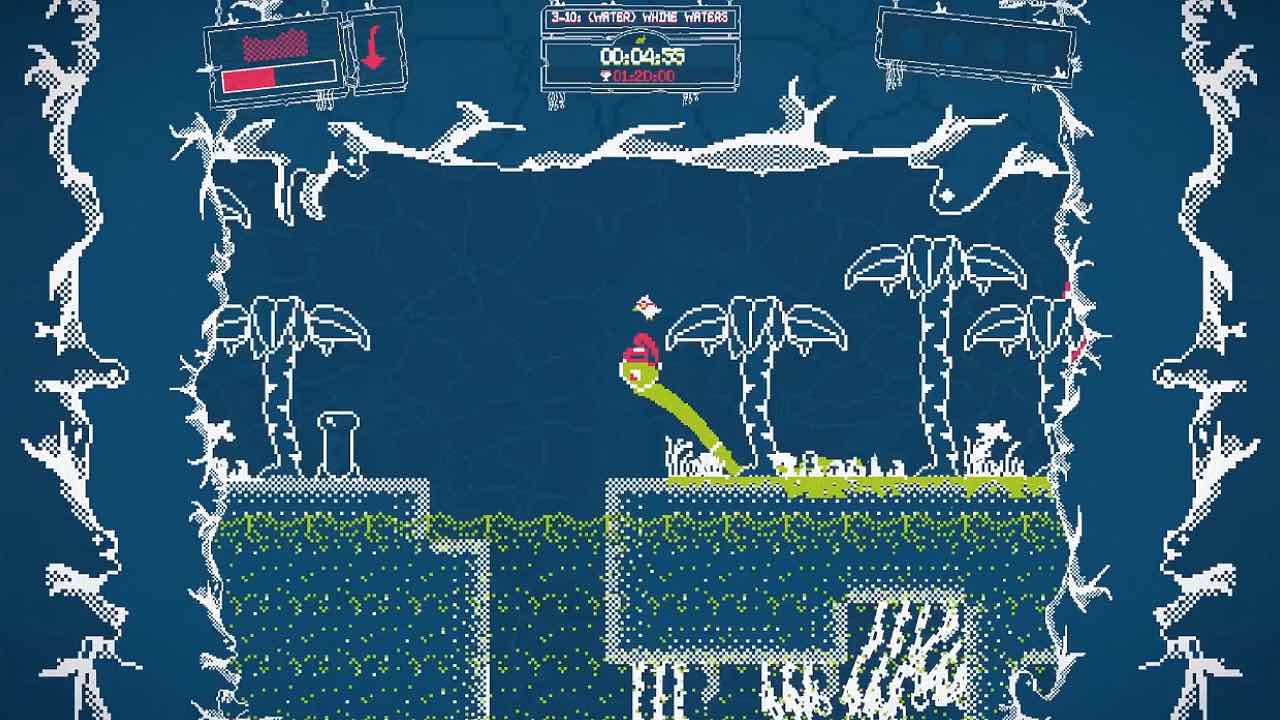 Parts of Slime-san‘s chiptune soundtrack are brilliant. You will have some of the tunes bouncing around your skull for hours on end and it fits the gameplay perfectly. Honestly, just leave the title screen running and listen to the intro music. It just doesn’t seem to loop. It just gets more epic the longer you listen to it. I do have an issue with the audio of the pause screen though, which has an unbearable droning sound that actually made me feel angry. It forced me to put the Nintendo Switch in Sleep Mode before I had the overwhelming urge to kick the TV in.

To sum it up, Slime-san is a great platformer with well-honed controls meaning that you can’t blame anyone but yourself for any silly mistakes that you make. For as little as a tenner, it’s bursting at the seams with content with plenty to do and unlock to keep you entertained for a very long time.

It even includes tailored speed running options if you are hardcore enough, as well as time challenges for every level where, if successful, you can earn a trophy for bragging rights. Even getting those apples are infectious. It’s trendy old school look may put some people off but there’s far more to this game than what meets the eye. If you are starving for a Super Meat Boy alternative or waiting for The End Is Nigh to be delivered on the Nintendo Switch, Slime-san is digestible fun that will keep your hunger at bay.