A few hours in, and I’m surprised that Siesta Moonquiff hasn’t woken up by this point. For the rounded character, named after the Spanish love of an early afternoon nap, is flung in all directions as he’s unwittingly sprung from his bedsprings.

That sees the youngster colliding with blocks, pinball-style bumpers and tambourines as he’s wheeled around the island of Fiestaville. Siesta isn’t a natural inhabitant of this non-stop party paradise, washing ashore after a freak storm carries him from his home. He’s soon discovered by colourful creatures, who throw a welcome party in his honour and take him on a guided tour of their jubilant island. 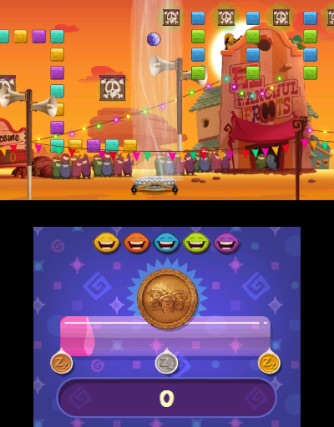 This is Mojo Bones’ first foray onto the Nintendo eShop and an entirely welcome one. Recalling Atari’s Breakout and Taito’s Arkanoid, the developer jazzes up the genre by entwining their own fun-filled craft around it. Gone is the dated stationary design, instead replaced by side-scrolling stages that promise to keep you on your toes in not knowing what will appear next.

Siesta’s bed can either be controlled dragging your Stylus around the touchscreen or through
using the Circle Pad or D-pad. That lends choice over whichever you feel suits you best, but it will be the angle of Siesta’s bounce that you will need to keep considering. Tapping the touch screen, or pressing A, when he is about to impact against his springy mattress will allow you to boost the height that he reaches – important for those looking to achieve the highest score.

Points scored fill a Juice Meter that tracks the points that you earn while displaying how far you are away from earning the next medal. With Bronze, Silver and Gold up for grabs, this welcomes revisiting levels to best your own scores, smacking Piñata Blocks while learning where to avoid Sour Crates that penalise you. 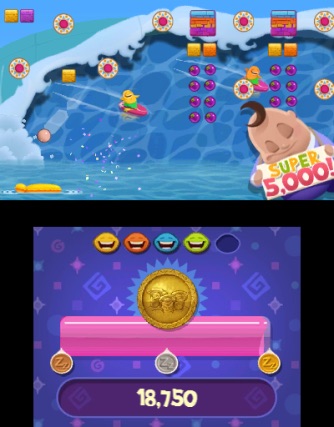 Things are switched up with the Popper Bed and Fan Bed, which sees you firing Siesta from an impromptu cannon or floating him through a level. Sporadic power-ups will also gain multi-ball opportunities, or enflaming Siesta allowing him to be flung through obstacles without rebounding off them. Meanwhile, you will also find yourself racing against the clock in Time Trial, and facing Piñata Bosses that become a clear highlight of Siesta Fiesta. These are particularly inventive, a personal favourite being in Balloon Lagoon where you’re tasked with whacking a swinging piece of meat to lure out Piñata crocodiles.

There are eight regions of Fiestaville for you to playfully bound your way through, that each exuberate their own style. Whether that be the surfer-populated Kahuna Bay, the bustling Grape Factory or the aquatic city of Fountasia that concludes your island tour, they brim with vibrancy and are accompanied by a Latin American-infused soundtrack that makes Siesta Fiesta such a joyous experience. Siesta Fiesta easily ranks among the Nintendo eShop elite, playful twists on an established classic resulting in a game that is wondrous to behold.