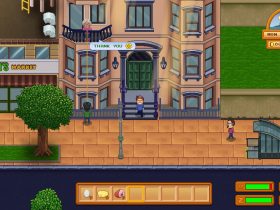 Start Life From Scratch In Circadian City On Nintendo Switch

I’ll always do my best when it comes to staying active; trying to fit in a visit to the gym a few times a week or going for a quick jog around the block of an evening. As good as I often feel for putting in the time and effort though, I wouldn’t exactly say those hours spent are massively fun and that has always bugged me. Working on my core or having a leg day shouldn’t be something I dread especially if it’s a regular thing. Why can’t working out be something to enjoy?

Nintendo looks to solve that dilemma with Ring Fit Adventure, a game that promises an experience that’s part-workout and part-video game quest. It’s worth noting, this isn’t the company’s first foray into the world of fitness – the Wii Fit series was an extraordinary success but one that definitely appealed less so to gamers and more so to the casual market. A long time has passed since its initial release back in 2008 with plenty of imitations since and much like the recent return of Dr Kawashima’s Brain Training on Switch, I did wonder if such a product could truly deliver something fresh and exciting. How wrong I was.

One thing you’ll notice right out the gate is how inviting Ring Fit Adventure is. Whether you’re a frequenter of the gym or someone looking for a good entry point into a regular exercise routine the game will cater to all. This is felt through its adjustable difficulty settings or simply the warm manner in which the game offers helpful suggestions like when to take a break, how to warm up and warm down or if you feel ready to up your difficulty ever so slightly. There’s never any pressure, you’re free to go about things at your own pace.

Aside from the actual game itself, the package also comes with two pieces of equipment – a Pilates Resistance Ring called the Ring-Con and an adjustable leg strap both including slots to slide a Joy-Con so to measure your actions. Both work admirably in accurately reading what you’re doing particularly the ring which had little to no trouble keeping up with the constant pushing, pulling and tilting I put it through. It feels plenty robust too with little signs of wear after three months of near-daily use. If there’s one slight annoyance though it’s that the leg strap has a habit of slipping down especially during leg-focused exercises. While it never impacting its accuracy too much it was annoying often having to readjust multiple times per session. All in all though, I’m impressed with the gear and appreciate how little space it takes up in the house.

So back to the actual game. Adventure mode is the main attraction here taking you on an exhausting journey through over a hundred different levels across numerous miniature world maps. You play as your choice of a female or male athlete who along with a sentient Ring (rather imaginatively named Ring), team up to take down an evil, bodybuilding dragon named Dragaux. It’s light-hearted and it’s cute but for me the narrative sort of faded into the background a couple of worlds in.

The levels of each world range from short mini-games yielding rewards to boss battles. The most common type you’ll come across though will involve making your way along a set path collecting coins and resources and occasionally facing off against enemies in battle. Moving your character is handled by simply jogging on the spot, while the Ring-Con can be used to perform jumps, collect items and deal with obstacles in your way. The game kept surprising me with its implementation of exercise to get around, for example having to squat to leap off a springboard or using the Ring-Con to shoot down falling rocks almost like an arcade shooter.

Combat meanwhile plays out like a turn-based RPG – your repertoire of attacks, blocks and heals triggered by physically performing different types of exercise. These skills come in four different colours each one focusing on a particular type of exercise – legs, upper body, core and yoga – and some even able to attack multiple enemies at once. Speaking of enemies, they too are colour-coded with matching attacks inflicting further damage.

It’s brilliant how well the two genres meld together but then again it shouldn’t really come as much of a surprise. The turn-based nature makes it a perfect fit for a game that doesn’t use traditional controls. It’s almost like a Paper Mario title where instead of hitting button prompts at the right time, you’re trying to perform an exercise with strong form. Sure if you strip away either the fitness or RPG portion of the game then you’d be left with a fairly straightforward example of their respective genre, but together they create an experience unlike anything out there. Neither one suffers because of the implementation of the other. Instead, they both complement one another.

In typical RPG fashion, you’ll earn experience and level up, unlocking new exercises and improving your character’s stats as you go. It’s nothing too in-depth but it’s certainly enough to make you feel like you’re always working toward something. Every time I would see my number increase by one a wave of excitement would wash over as I wondered what bonus I’d unlock next.

Surprisingly the game doesn’t stop there when it comes to RPG mechanics. You’re also able to craft ability-enhancing smoothies and soups with ingredients you gather within levels as well as purchase new clothing to not only alter the look of your character but also enhance certain stats. You’ll even be able to unlock further upgrades via a skill tree and take on side quests. Again such tropes are all fairly commonplace in other RPG titles out there, but to see them all seamless gel together so well in a fitness game is quite impressive.

Again, it’s these RPG elements that truly made my workout feel far more interesting and enjoyable. It was the watching of my experience rise up, setting the best line-up of skills before entering a level or pushing myself through a long and arduous boss battle that kept me engaged throughout Ring Fit Adventure. It’s almost as if the game disguises the fact you’re doing a workout, therefore making it feel less arduous and repetitive.

Quick Play steps away from the more structured nature of Adventure mode and allows you to pick and choose individual workouts, mini-games and sets. Perfect for those who simply want a standard workout minus the bodybuilding dragon and experience gaining or just want to compete for a high score in a brief mini-game or exercise such as pushing in on the Ring-Con). Personally I found myself having too much fun with the game’s adventure to go back to a standard workout routine again.

The game does a great job tracking your performance, logging high scores and alerting you to how long you’ve been exercising and how many calories you’ve burned that day or in total. It certainly added an extra level of competition between my wife and I that’s for sure.

Last thing worth mentioning is the overall presentation of the game which impresses on both and audio and visual front. The music is catchy and suits the whole workout theme of the game. Furthermore, it’s something I never felt myself growing tired of, important especially considering you’ll hear the same battle theme a lot throughout adventure mode. The game is also bright and colourful, each world sporting a unique look. It’s certainly a refreshing change of pace from watching yourself in the mirror at a gym.

After countless sweaty hours with Ring Fit Adventure, I’m left genuinely shocked. This game is a real workout that’s left me breathless, tired and often times aching the following day. At the same time though it also manages to expertly weave everything together with a lengthy and enjoyable RPG adventure that feels essential to the experience rather than merely bolted on. Perhaps best of all though it’s made me visibly excited to workout and that in itself is quite the achievement.