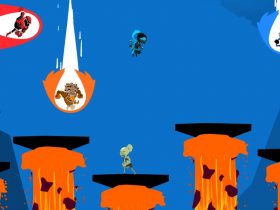 WarpedCore Studio has announced that Aqua Lungers will release on Nintendo Switch this week.

With the world’s greatest treasures lost to the sea’s murky depths on shipwrecks, those that want to get rich must wear brightly-coloured diving suits to search for the sunken loot.

Whether playing solo or competing in local multiplayer for up to four players, Aqua Lungers challenges you to race through stages to collect the most treasure – with deadly creatures and dastardly opponents to contend with.

There are several options to help you to outpace your competition, whether that be using your speed and agility to outswim them or unleashing devastating attacks to slow them down and steal whatever they’re carrying.

Aqua Lungers will release on the Nintendo eShop for Nintendo Switch in North America on 21st May 2020, and in Europe, Australia and New Zealand on 4th June 2020.