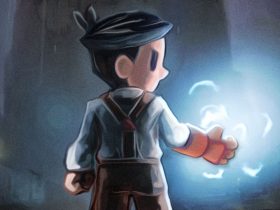 Mankind has traveled to the stars and settled on the planet Nexus, but the machines that had been installed as protectors have become corrupted and brought terror.

Influenced by cyberpunk, post-apocalyptic classics, science fiction, horror, and grotesque dark fantasy, you are a raider among the ruins of the past.

You must travel through a gritty post-apocalyptic wasteland, customizing your character through stats and the choices that you make – otherwise coming to expect “real-time gameplay with ranged and melee combat, stealth, multiple-choice dialogue, an inventory full of items and Fleshworms, a crafting system and social skills like pickpocketing and puking.”

Death Trash will release on the Nintendo eShop for Nintendo Switch worldwide in 2020.