With the scary place that our world has suddenly become, we’d leap at the chance to momentarily escape to a happier alternative. Nintendo present their answer in Poochy & Yoshi’s Woolly World, whisking us away to a handicraft land that has been woven with such intricate care.

This Nintendo 3DS exclusive comes packed with every joyous level that we unravelled in Yoshi’s Woolly World on Wii U, except this time Yarn Yoshi’s heartwarming companion Yarn Poochy has a more prominent role to play.

Craft Land epitomises everything that we have come to love about Nintendo. Constructed with every material imaginable, developer Good-Feel uses yarn, felt, fabric, buttons and more to produce an altogether magical experience that is deserving of this chance to reach a wider audience.

With no threatening timer forcing you to hurry through each level, players are free to explore their surroundings as smiling clouds beam down overhead. Yarn Yoshi’s alarmingly long tongue can be used to unravel walls to uncover secrets, while his other moves will see you throw Yarn Balls to knit together new paths, Ground Pound to break blocks, and Flutter Jump his way through what quickly proves to be a wondrously charming adventure. 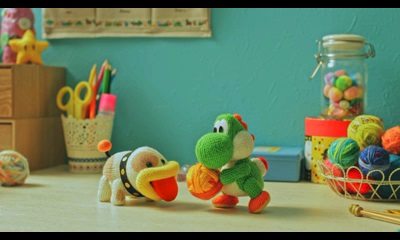 Good-Feel masterfully weave their creativity to entertain throughout, whether that be in excitedly wandering in a Transformation Door to see Yarn Yoshi become Moto Yoshi, Mole Yoshi or Umbrella Yoshi and race through a timed challenge. Bosses are inventive and humorously conceived, thanks in part to Kamek’s witty punchlines.

Poochy Pups will ease the experience for those that choose to play in Mellow Mode, where the miniature pups will sniff out secrets and hidden areas, attack nearby enemies, and become a constant Yarn Ball source for you to throw at anything you like.

One hang-up is that, as a game originally created as a console experience, the levels are longer than normal for portable play. I regularly found that on my morning commute, I would have to leave levels unconquered in Sleep Mode. That isn’t a complaint related to the breadth of content, but with Nintendo’s handheld output I am used to seeing a level through to conclusion.

It is Yarn Poochy content that most will be anticipating, which, when visiting Poochy Hut, will let you take part in Poochy Dash courses. These have been designed for quick burst play, auto-runner courses where concentrate on leaping around as the loveable pup to collect Beads and Poochy Pups as they bound towards the goal. Once you have completed a course, three missions will then unlock which add welcome replay value whether that be to challenge players to collect a certain amount of Beads or pop balloons. Progression in the main Story mode can reward you with the chance to activate Gold Rush on these courses, seeing Yarn Poochy chase a trail of golden beads placed by Lakitu. I had so much fun with these Poochy Dash courses. More please, Nintendo. 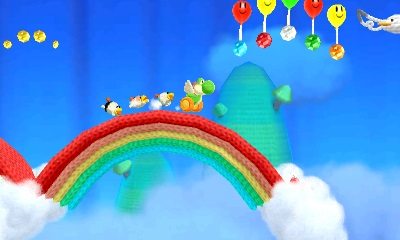 The stop-motion animations created by Japanese studio dwarf are utterly adorable, hilarious to boot and packed with heartwarming character. Given the painstaking process to produce them, it is perhaps a shame that they have been confined to such a small screen, but, with 30 to view, it soon becomes a persuasive argument for those that may have already seen the adventure through to relive it on Nintendo 3DS. One video is unlocked per day, which will encourage players to return on a regular basis to make sure that they can see them all, correctly answering a question about what happened within each short rewarding them with Beads.

Players will also have the chance to craft their own Yarn Yoshi designs, which can be distributed to others through StreetPass. This tool has an Easy Mode and Professional Mode, aimed at both ends of the age and skill spectrum. Craft materials unlocked by collecting Pencil Patches in Story mode can be used to customise the design, letting you unleash your own creativity to personalise the Mushroom Kingdom favourite.

amiibo support continues, with the new Yarn Poochy amiibo letting you summon the energetic pup while playing a course. When the Yarn Poochy amiibo is used in Poochy Dash the courses can be played in Time Attack mode, which, once completed, will unlock special Poochy designs. Whereas scanning any Yoshi amiibo will let you control two Yarn Yoshi at the same time, you can save a customised pattern with the Yarn Yoshi amiibo to share with friends, and other compatible amiibo will unlock patterns based on their respective characters – as seen in the Wii U version.

Poochy and Yoshi’s Woolly World is the greatest thing to have happened to wool since knitting was discovered by the Egyptians. Aside from the necessary visual downgrade, it comes as a welcome surprise that the unbeatable platformer is so faithfully recreated on Nintendo 3DS. Don’t miss it.