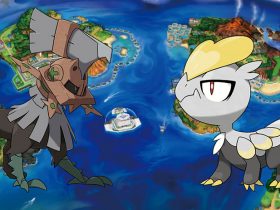 Type: Null And Jangmo-o Revealed In Pokémon Sun And Moon

Image & Form’s Brjánn Sigurgeirsson has revealed that the Swedish indie developer will soon be looking to recruit SteamWorld Ambassadors.

Every other Tuesday, they will post a challenge on their blog with the winner of each becoming an official SteamWorld Ambassador – the reward being that you will receive exclusive information about the SteamWorld series, and the chance to play SteamWorld Heist before it officially releases.

This week’s challenge will close today (Friday 24th April) at 23:59 CEST and 5:59pm EDT, and tasks you with cooking up “a kick-ass steampunk name for a weapon that will appear in the game.” Head on over to Image & Form’s official blog to see it, and be inspired!

SteamWorld Heist will release through the Nintendo eShop on Wii U and Nintendo 3DS later this year.