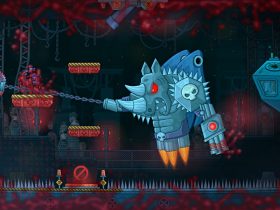 Death-Defying Never Give Up Coming To Nintendo Switch

Yogscast Games and Catastrophic_Overload have announced that Drink More Glurp will release on Nintendo Switch next week.

This physics-powered hotseat party game is set on a faraway world where aliens have copied Earth’s Summer Games but haven’t quite worked out everything correctly.

With the chance for up to 20 players to compete in local multiplayer, each player will be challenged to control their own noodle-armed galactic athlete to run, jump and throw as you compete in a “sporting” contest.

After Earth TV leads the aliens to believe that a great competition is all about paid sponsorships, sponsors have seized control of the sporting events and changed them to fit their own brand’s agenda. That could see Gravitol Weightloss lower the world’s gravity or Electromagnetic Rave give competitors laser hands.

There is also a single-player Challenge Mode that you can participate in, which is supported with online leaderboards and replays.

Drink More Glurp will release on the Nintendo eShop for Nintendo Switch worldwide on 6th August 2020 priced at £7.99 ($9.99), with a 10 percent pre-order discount available.