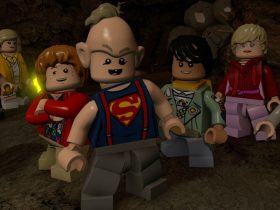 LEGO Dimensions Truffle Shuffles With The Goonies, LEGO City And Hermione Granger In May

Wedbush Securities Research Analyst Michael Pachter has stated that he doesn’t deem Nintendo’s forthcoming home console, the Wii U, to be next-generation.

He believes competitors also aren’t concerned by its late 2012 release, especially Microsoft who see Nintendo’s latest “as an Xbox 360 with a tablet controller”.

“I take a lot of s*** for this: their next gen system is a current-gen system But people who go, ‘well what are Microsoft and Sony going to do to catch up with Nintendo?’, they don’t care”, Pachter explained to Tested. “Microsoft especially is not afraid of the Wii U. They look at the Wii U as an Xbox 360 with a tablet controller and is gonna likely come out at a higher price point than the 360 at the time.”

He also stated that developers may struggle with the console, due to it being a “complicated game design for developers, who can’t figure out if the Wii U will ultimately support only one or multiple controllers.”

Pachter also believes that Nintendo are “all but assured of limited third party launch support”.