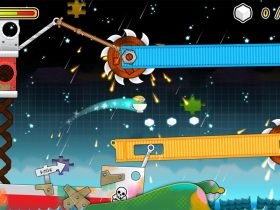 Storm In A Teacup Out On Nintendo Switch This Month

D-Pad Studio has announced that Owlboy will soon see release on Nintendo Switch, their lauded story-driven platform adventure game in which players fly and explore a new world in the clouds.

Described by the developer as “a love letter to pixel art for a new audience,” the game sees players assume the role of Otus, a mute that is struggling to live up to the expectations of owl-hood.

When the sky pirates suddenly appear things spiral from bad to worse, leading players on a journey through monster-infested ruins that are packed with unexpected encounters, well-kept secrets, and burdens that no one should have to bear.

Owlboy will release on the Nintendo eShop for Nintendo Switch worldwide on February 13th.