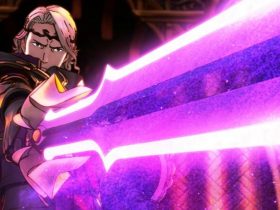 Don’t hang up that chef’s hat just yet; Overcooked 2 has more kitchens to conquer and new recipes to master in its new downloadable add-on, Surf ‘n’ Turf.

I really enjoyed my time with Overcooked 2 back in August, the game playing it rather safe as far as sequels go but injecting enough new ideas to keep things interesting for me and my group. When all’s said and done Surf ‘n’ Turf is essentially more Overcooked but again with just enough fresh twists to make it worth stepping back into the kitchen one more time. 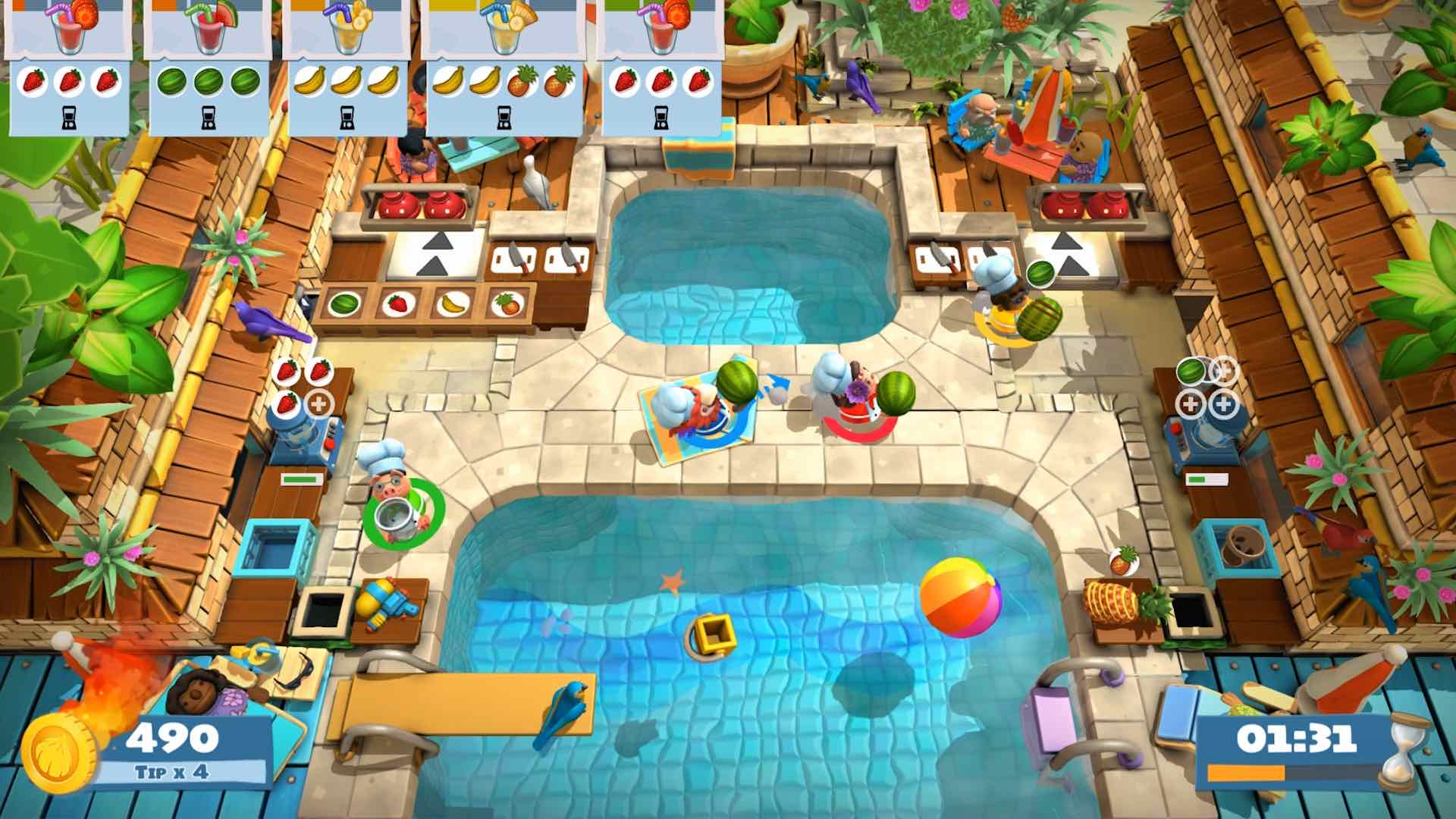 King Onion is dealing with the repercussions of his actions in Overcooked 2 having now been exiled to a beautifully sunny beach resort that would make any holiday-goer jealous. Hoping to get back in the council’s good graces, he enlists his trusty team of chefs – that’s you – to gather some new recipes and perform in more awkwardly laid out kitchens.

After some initial confusion on the whereabouts of this DLC from the main menu, I was pleasantly surprised to see Surf ‘n’ Turf’s twelve stages contained within their own world map and treated as an extension to Overcooked 2’s story. Each kitchen as you might expect challenges you with cooking as many dishes as possible within a time limit while multitasking and dealing with an assortment of hindrances littered about your workspace. I will say the DLC doesn’t hang about ramping up the difficulty. While I personally found Overcooked 2 to be a little on the easy side, Surf ‘n’ Turf assumes you know your stuff and works best as a post-game extra as opposed to something you’d jump into as a newcomer to the series.

The change in location is refreshing with each kitchen housing its own quirks such as floating rafts and even lines of conga dancers getting in your way. They’re easily some of the more chaotic stages in the series and will truly test your ability to function as a team effectively. 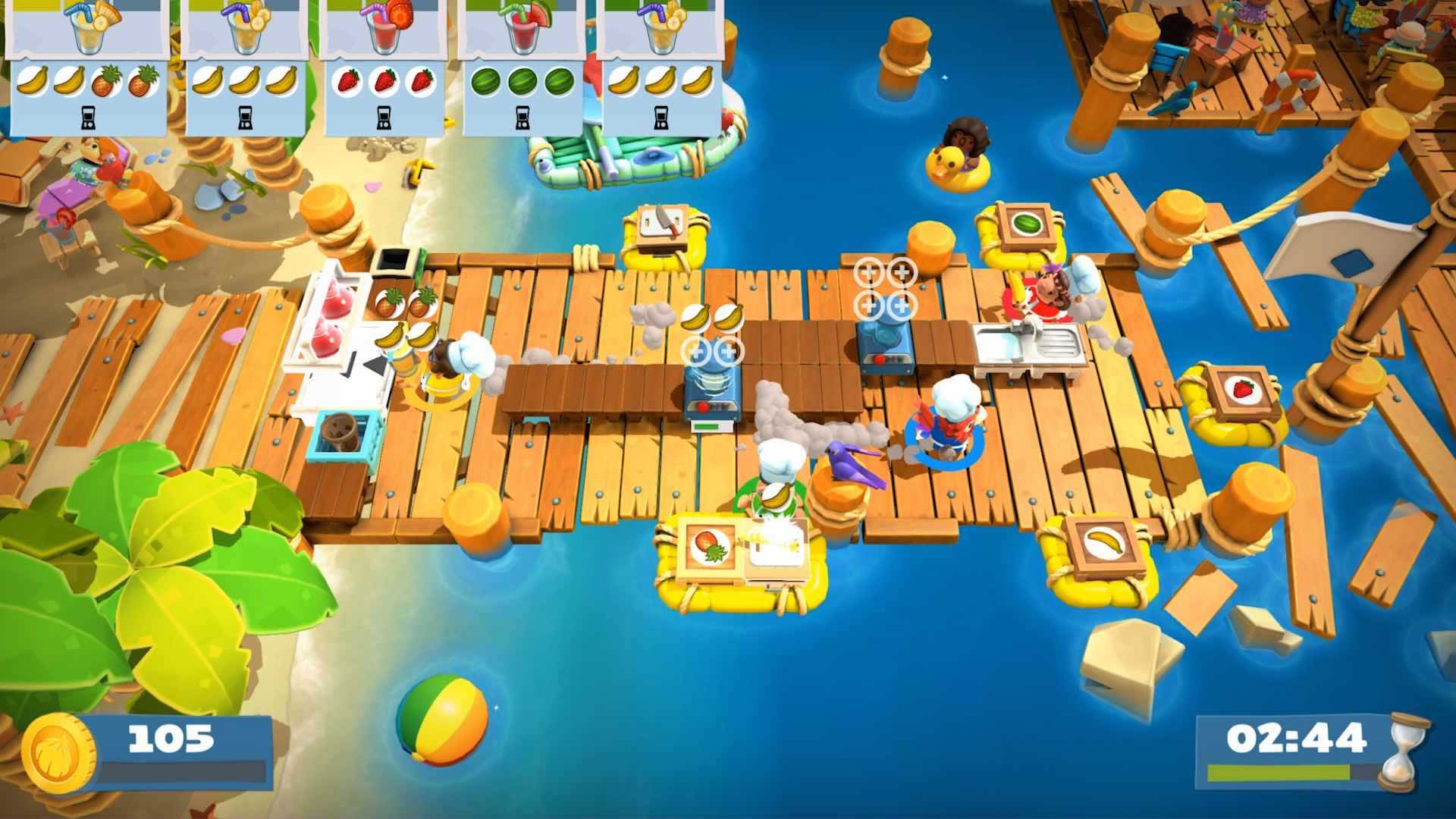 Two new recipes have also been added – kebabs and smoothies – both of which require unique approaches in order to prepare. The kebabs in particular force you to nurse a fire pit using a bellow to keep the flames high and the food cooking. Another addition is the water guns which act as your means to put out fires and clean dishes. What makes these particularly enjoyable to use though is they can actually push players around should you spray them. As you can imagine this leads to many a water fight.

Also included are three new chefs – including the adorable parrot – and a couple of competitive kitchens.

If you left Overcooked 2 hungry for more than Surf ‘n’ Turf is likely to satisfy that appetite. Tougher, crazier and guaranteed to push your teamwork to its absolute limits, Ghost Town Games’ newest addition is another nourishing slice of co-operative chaos.