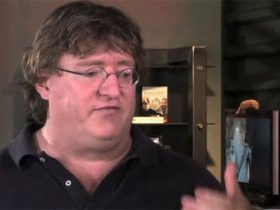 Nintendo have unveiled the successor to the Wii during their E3 Media Presentation, ending months of speculation by avid fans and the press.

That console, is the Wii U.

Within the presentation Satoru Iwata, Global President of Nintendo, promised that the new console will provide its install base with “deeper experiences” and “wider appeal” than that currently on the market.

The console, due to be released in 2012, will include a controller that features a 6.2″ touchscreen and will allow developers to display additional information whilst the player continues to view gameplay on their HDTV.

The controller itself is also able to be used as a portable gaming machine, with players able to enjoy a selection of games away from the confines of sitting at their console.

Further to this, the controller will include an accelerometer and a gyroscope, a rumble feature, an inward-facing camera, a microphone and speakers. Adding to this is the Classic Controller button scheme encompassing two analog Circle Pads, Control Pad, A / B / X and Y buttons, L / R buttons and ZL / ZR buttons.