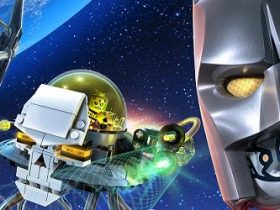 LEGO Batman 3: Beyond Gotham swoops to Wii U and 3DS

Attendees step into Springdale to immerse themselves in the world of LEVEL-5’s Yo-kai Watch, activities ranging from a Yo-kai Art Contest, try the iconic Yo-kai Watch dance with Jibanyan in front of a green screen, and take part in a Yo-Kai Stamp Quest where the first 300 people each day to spot ten hidden Yo-kai will win a Yo-kai Watch Medal Mystery Bag.

Monster Hunter Generations will also be playable, with expert players taking to the stage to offer their advice in tackling the sprawling action RPG, while a Prowler and props present a chance to snap photos.

Pikachu will also make an appearance to help celebrate 20 years since Pokémon Red and Green first launched in Japan, while a special distribution of Shiny Xerneas will be available to those with Pokémon X, Pokémon Y, Pokémon Omega Ruby, or Pokémon Alpha Sapphire. Wandering through the Year of Pokémon area in the Nintendo booth will let you take a walk down memory lane, and also receive a special code.