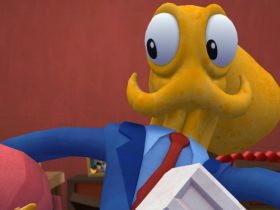 WiiWare
* Anima: Ark of Sinners, Anima Game Studios – 1000 Wii Points
Ark. Everything begins and ends in this forgotten city. While fleeing from theirs pursuers, Celia and Nemo fall into the depths of the earth to that place. All alone, she awakens in an unknown location for her, an empty metropolis inhabited only by shadows. Join Celia in an astounding journey through the fascinating world of the RPG saga Anima Beyond Fantasy, an adventure that will lead both to the deepest secrets of the city… and of her own soul.

Nintendo eShop
* Pyramids, Enjoy Gaming Ltd. – $3.99
Pyramids is a puzzle/platform game where an explorer tries to get out the pyramids with his loot. The task will not be easy. There are many dangerous traps and monsters that will put your dexterity and ingenuity to the test. The player will have the use of TNT and a gun but his best friend will be his shovel which allows him to create and destruct bricks. These bricks will be used as stairs, bridges, protections…

Virtual Console (Nintendo 3DS)
* Burger Time Deluxe, G-Mode – $2.99
Give Chef Peter Pepper a helping hand to create the ultimate hamburger. Each ingredient is located on a different platform, and you must climb a series of ladders in order to reach them all. Walk across the ingredient to drop it closer to the waiting plate below. Once all the burgers have been completed, you’ll be able to move on to the next level. But watch out: Renegade ingredients will stop at nothing to put an end to your cooking days.

* Academy: Checkers, Gamelion – $4.99 (Nintendo 3DS) 500 Nintendo DSi Points (Nintendo DSi)
The world’s most famous board game for two players is now joining our Academy. If there’s no one around to compete with, there’s no need to worry: skillful AI players will gladly play with you in two Checkers variants: English Checkers and International Draughts.

Nintendo Video
* Thriller – Dreamworks, Free
Shrek, Fiona and Donkey are in for the scariest Halloween of their lives when they attend a midnight musical based on Michael Jackson’s classic video… it’s bound to be a Thriller!