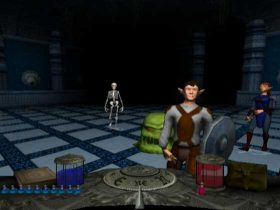 Nintendo of Europe have announced the latest content to be made available through the Wii Shop Channel, Nintendo DSi Shop and Nintendo eShop on Nintendo 3DS.

WiiWare
* Vampire Crystals, Shanblue Interactive – 1000 Wii Points
Once upon a time… in a place called Creepyland, where zombies and vampires coexisted peacefully, vampires kept the zombies well drained by sucking their blood and zombies ate vampires that died from old age or illness. But on a fateful day, all this changed. Transform yourself into a brave vampire and lead the fight against the ruthless zombies.

Virtual Console (Nintendo 3DS)
* Ghosts’n Goblins, Capcom – £4.49 / €4.99
Ghosts’n Goblins pits brave knight Arthur on a hair-raising journey to rescue his beloved princess from her supernatural captors. Arm yourself with weapons like the Javelin, Dagger or Axe, and battle your way through six monster-infested stages until the final confrontation with the Devil himself. But beware the Devil’s tricks. The princess may be further than you think.

3DS Download Software
* Touch Battle Tank 3D, Agetec – £4.49 / €4.99
In Touch Battle Tank 3D, it’s you on a solo mission against a nearly unstoppable army of killer tanks. Your strategy – keep the action going and the shells flying! Command either a powerfully armoured engine of destruction or a light, agile hit-and-run variety of menacing machines, capable of unleashing incredible firepower!

Nintendo DSiWare
* Crystal Adventure, Circle Entertainment – £1.79 / €1.99 (Nintendo 3DS) 200 Nintendo DSi Points (Nintendo DSi)
In the outskirts of the kingdom, there are rare crystals containing a secret magical energy inside them. Rumour has it; a sorcerer is collecting the crystals in a tower for some reason, but no one knows where or if the tower actually exists. As the most famous bounty hunter in the kingdom, you are hired to seek out and investigate the tower’s location. At last you find the tower, but it has already been overrun by a large group of monsters, performing a dark ritual to summon a highly dangerous demon. Although the demon has been summoned, you must stop the continuing ritual and kill the demon before it gains full power, or everything will be destroyed.