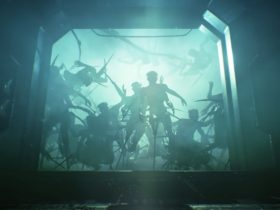 WiiWare Demo
* Gnomz, QubicGames – Free (Full Game: 500 Wii Points)
This free demo offers you the chance to try Gnomz, a new exciting arcade fighter for the WiiWare service. Gnomz allows up to four Players to play against each other and/or AI opponents in three different game modes for some bashing, smashing multiplayer madness.

Virtual Console (Nintendo 3DS)
* Bionic Commando, Capcom – £3.60/€4.00
This Game Boy version of the NES classic brings you all the platform-swinging, gun-toting action of the original plus a brand new graphical style. Become Rad Spencer the Bionic Commando to take out the evil Director Wiseman and bring peace to the world.

Nintendo DSiWare
* Antipole, Saturnine Games – £4.50/€5.00 (Nintendo 3DS) 500 Nintendo DSi Points (Nintendo DSi)
Arm yourself with the ability to reverse gravity in this action-packed
side-scrolling adventure! With the power to flip the force of gravity, you can run on the ceiling, leap incredible distances, and even use gravity to vanquish your enemies.

Nintendo Video (Nintendo 3DS)
* 3D Machine – Free
The story of a brilliant inventor who finally makes a breakthrough creating a wondrous invention only to leave it in the hands of his incapable assistant leading to wealth and love, but inevitably ending in a catastrophe.