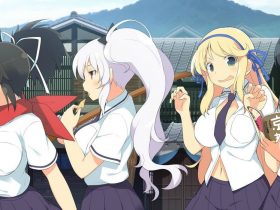 It’s the start of another week and the Nintendo Download list for Europe is now in, confirming the new games to be available through the Nintendo eShop across Wii U and 3DS.

The Wii U’s Virtual Console expands thanks to Konami’s Adventure Island, while a trio of indie treats come in the form of Armillo, Flowerworks HD: Follie’s Adventure, and Guacamelee! Super Turbo Championship Edition.

Meanwhile the 3DS sees the arrival of Chibi-Robo! Let’s Go Photo!, Pokémon Art Academy and Squids Odyssey, which introduces a welcomed cross-buy opportunity across Wii U and 3DS.

Virtual Console (Wii U)
* Adventure Island, Konami – £3.49 (€4.99)
An evil witch doctor has kidnapped Master Higgins’ true love, Tina! You must venture through eight perilous areas filled with enemies determined to stop you. As if that wasn’t tough enough, Master Higgins loses vitality over time; so he must grab fruit, milk and whatever other goodies he can as he races towards his goal. Smash eggs to find useful items like the axe and skateboard to help you progress. At the end of each stage, face off against the witch doctor’s various guises. Go, Master Higgins, go! This is the US version of the game.

* Flowerworks HD: Follie’s Adventure, Nocturnal – £2 (€2.50) until 31st July 2014, normally £4 (€5)
During a routine space trip, Follie’s ship mysteriously malfunctions and crash lands on Elilia, losing all her precious Flowerwork seeds. Before long, her very sanity is threatened by drab surroundings and uncooperative gnomes. Help Follie find her seeds, use Flowerworks to transform her surroundings and show those gnomes who is boss on the way to unlocking the secret of Elilia. Flowerworks HD has 5 difficulty levels to cater to all skill levels, but beware – becoming a Flowerworks master in this 20hr puzzle/adventure game is not for the faint of heart! Flowerworks HD is a high-definition, 1080p/60fps remastered version of the WiiWare release Flowerworks. Flowerworks HD supports two-player cooperative play, Off-TV play and supports both the Wii U Pro Controller and Wii Remote.

3DS Download Software
* Chibi-Robo! Let’s Go, Photo!, Nintendo – £11.69 (€12.99)
The Curator dreams of immortalising real-world objects as NostalJunk to put on display, and it’s your job as Chibi-Robo to help him fill his Exhibition rooms with your very own photographs! Using your Nintendo 3DS or 2DS cameras, line up in-game shapes with real-life objects, take a snap, then watch them be transformed into the coveted NostalJunk! Explore the human world as the helpful robot hero and see things from a new – and Chibi – perspective, as you meet a cast of colourful and hilarious characters, including a sushi-slinging squid, a high-flying super hero, and an eccentric pair of chefs. Solve their problems and clean up the world to earn Happy points to buy Silhouette films for your camera. The more happiness you spread, the faster you can realise The Curator’s dream of having as many NostalJunk aficionados admire his exhibits as possible.

* Pokémon Art Academy, Nintendo – £29.99 (€34.99)
Grab your stylus and start your Pokémon-drawing journey in Pokémon Art Academy, only on Nintendo 3DS family systems! This Pokémon-themed iteration of the Art Academy series offers budding illustrators and Pokémon fans alike 40 lessons to learn how to paint, sketch and draw with beloved Pokémon characters.

* Quell Reflect, Circle Entertainment – £3.49 (€3.99)
Quell Reflect is an enchanting game of logic, which has taken the puzzle world by storm. Put your brain to the test with this charming puzzle game that features over 100 levels of addictive, lateral thinking. Featuring a
beautiful exclusive soundtrack by Steven Cravis, Quell Reflect is a deceptively simple, and easy to pickup game that will test your brain in new ways. Be prepared to lose yourself in this entrancing Zen classic! Fall in love with Quell today!

* Squids Odyssey, The Game Bakers – £9.99 (€12.99)
Squids Odyssey is a unique mix of action strategy and RPG: build your team of Squid heroes for epic turn-based battles against corrupted crabs and shrimps! Steev and the rest of the Squids are in danger! An infectious black ooze is corrupting their world. The band of unlikely heroes need to fight back to save their kingdoms! If you downloaded Squids Odyssey on Nintendo 3DS, you can download Squids Odyssey from Nintendo eShop on Wii U for free!