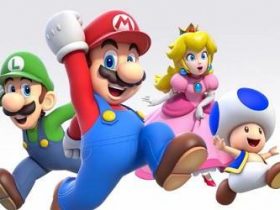 The Nintendo 3DS takes a star turn in this week’s Nintendo Download list, with a diverse array of games making their way to the handheld.

Virtual Console across Wii U and 3DS continue to steadily expand, with Nobunaga’s Ambition and Game & Watch Gallery 3 releasing respectively.

Virtual Console (Wii U)
* Nobunaga’s Ambition, Koei Tecmo Games – £5.49 (€7.99)
Battle or diplomacy? Swords or sanctions? As the ruler of a warring state in the turbulent feudal period of Japanese history, your decisions will sway the course of a nation. Nobunaga’s Ambition is a classic strategy game from the masters at Koei. Your ultimate goal is to unify Japan under your rule. Manage your economy, build up your army and expand your territories. Send spies to keep watch on your enemies, or dispatch ninjas to sow betrayal in rival forces. If all else fails, unleash war! This is the US version of the game.

Wii U Download Software
* Angry Bunnies: Colossal Carrot Crusade, Cypronia – £5.99 (€6.99)
Angry Bunnies: Colossal Carrot Crusade is challenging physics-based demolition, with addictive gameplay. There are 150 fun levels to enjoy, perfectly suited for short bursts of gaming. Use skill and logic to save bunnies from the cunning fox. Collect carrots and submit your score to show everyone who the best player is!

* Art of Balance, Shin’en Multimedia – £5.35 (€6.70) for those that own Art of Balance TOUCH! on Nintendo 3DS, normally £7.15 (€8.99)
Grab your Wii U GamePad and build a balanced stack in this physics-based puzzler! Puzzle games must be addictive. This was our top priority during the development of the game. That’s why we designed 200 levels that not only challenge your skills but also your imagination. With its perfect touch controls ‘Art of Balance’ is easy to pick up and hard to put away. Play alone or invite friends to drop in at any time for co-op play. We even added split-screen and online multiplayer for extra fun. Seeking an even bigger challenge? Then try out the new endurance mode and improve your Online-Highscore. Art of Balance brings the ultimate “just one more puzzle” experience to your Wii U.

3DS Add-on Content
* Fantasy Life: Origin Island Expansion Pack, Nintendo – £7.19 (€7.99)
Embark on the adventure of your dream life as you craft, cast, fish, mine, battle and explore like never before! With the innovative Life system, your choices don’t just upgrade characters – they help shape your journey! Explore a huge fantasy landscape beside surly, dark paladins, slick pirate captains, regal princesses, and others who share your taste for the unknown. Change to one of 12 Life classes at virtually any time to access different abilities: for instance, the combat class has fierce fighters, while the crafter class is skilled at making stronger weapons and tools. If you’re not in the mood for battle, switch to a gatherer class and spend some time as a lumberjack or a fisherman – it’s your adventure to play your way!

3DS Download Software
* Demon King Box, CIRCLE Entertainment – £2.99 (€3.99)
Demon King Box mixes real-time strategy with classic RPG gameplay. Gather demons and heroes to join and aid your quest. Multiple types of minions can be gathered not only by conquering, but also by researching minions. The demon heroes can enhance the demon legion with their unique skills. Demons level up and get stronger not only by victory, but also by feeding them with their favourite food.

* Fantasy Life, Nintendo – £34.99 (€39.99)
Embark on the adventure of your dream life as you craft, cast, fish, mine, battle and explore like never before! With the innovative Life system, your choices don’t just upgrade characters – they help shape your journey! Explore a huge fantasy landscape beside surly, dark paladins, slick pirate captains, regal princesses, and others who share your taste for the unknown. Change to one of 12 Life classes at virtually any time to access different abilities: for instance, the combat class has fierce fighters, while the crafter class is skilled at making stronger weapons and tools. If you’re not in the mood for battle, switch to a gatherer class and spend some time as a lumberjack or a fisherman – it’s your adventure to play your way!

* FIFA 15, Electronic Arts – £29.99 (€39.99)
FIFA 15 Legacy Edition on Nintendo 3DS delivers unmatched authenticity that reflects the current football season with updated kits and rosters and over 30 officially licensed leagues, 50 real-world tournaments, 500 authentic clubs and 12,500 players but no updates to gameplay or game modes. Play traditional 11 versus 11 matches or free your game in epic 5-v-5 street matches with full 3D effects. Play as a real-world superstar or re-create yourself and compete in 3D Street Football Mode. Optional touch screen controls deliver pin-point shooting and passing at your finger-tips.

* KORG DSN-12, DETUNE – £24.99 (€29.99)
KORG DSN-12 software makes it easy for anyone to enjoy serious sound-creation and song production with analogue synthesizers. The software provides 12 monophonic synthesisers. Each one lets you add 3 effects, allowing a broad range of powerful sounds that you would not expect from a game machine. You can make your ideas take shape very quickly, and you can enjoy constructing songs in real time while performing in a DJ-like manner. Don’t miss the world’s first 3D display oscilloscope screen!

* Tenkai Knights: Brave Battle, Bandai Namco Games – £24.99 (€34.99)
In this 2D-robot combat game, you can step into the role of one of the four Tenkai Knights heroes and must stop the evil Vilius and his army of shape shifting robots from destroying planet Earth and Quarton. Power-up your hero with over 100 customisation parts and cooperate with an ally to complete missions from the Story Mode! Up to 4 Players can also compete against each other in a VS mode to find out who’s the most powerful hero! For the first time ever, relive the Tenkai Knights experience in an exciting action game offering a lot of customisation possibilities and all the fun from the Spin Master Toy line and the animated TV series!

Nintendo DSiWare
* Sokomania 2: Cool Job, Cinemax – £1.79 (€1.99) or 200 Nintendo Points
The work of a warehouse keeper never required such a high IQ! Will you earn the Cool Job? Sokomania 2 enhances the popular gameplay principles with many new dynamic features. The traditional maze full of crates that have to be pushed to the right spots is just an opening warm-up in Sokomania 2. Everything changes the instant the momentum comes into play; crates start to move on their own, corridors of the warehouse become divided with doors, and switches or turntables that can change the direction in which crates move on the floor. At moments like these, one has to start thinking hard or patiently experiment with various possibilities. Levels are arranged by their difficulty, allowing players to gradually adopt new gameplay features and their combinations. The warehouse keeper can be controlled with the +Control Pad and there is an interactive map of the whole warehouse on the bottom screen that can be used to promptly inspect any corner of the level. The objective of the warehouse keeper is to place all crates on the target squares while taking as few steps as possible. Those who want to find an optimal solution will certainly appreciate the time loop feature. It enables you to ‘rewind’ the recording of the warehouse events at any time so that you can try another approach. Sokomania 2 allows up to three separate game profiles to be created and it generates a unique game code for each player, which can be submitted to a website and entered into the global leaderboard. The total score can be improved by returning to an already completed level and finding a better solution.