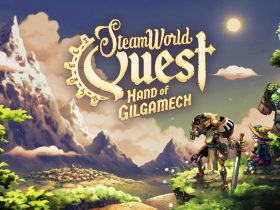 Mr. Driller 2 extends the Game Boy Advance titles on the Wii U Virtual Console, whereas the 3DS is treated to Comic Workshop and Strike Force Foxx. Meanwhile Nintendo eShop favourite SteamWorld Dig is discounted alongside ATLUS titles, escapeVektor and others.

Virtual Console (Wii U)
* Mr. Driller 2, Bandai Namco – $6.99
Armed with a mighty drill, dig deep through multicolored blocks until reaching safety. Not all of the blocks will be breakable, but be careful that the blocks you break don’t fall on you or cut off your air supply. How deep can you dig underground?

3DS Download Software
* Comic Workshop, Collavier Corporation – TBC
Ever wanted to make your own Comics or Manga? No need to wait any more, here is the software you were looking for! With Comic Workshop, you will be able to easily create Comics and Manga, step by step, thanks to the various tools available. From frame’s management to text entry, everything you need to make the best creations is gathered in this software. Speech Bubbles, Pattern Filling, Stickers or other Roller Stamps are not only useful but also fun to use! Many standard tools are also present like the Eraser, Straight Line tool, Color Picker, and Selection tool.

* Strike Force Foxx, Big John Games – TBC
Take control of Captain Raymond Foxx as you guide your Razor-One helicopter through intense missions, battling the enemy and saving your citizens. Take to the air in your helicopter in more than 35 missions to eliminate numerous obstacles, including gunmen, tanks, helicopters, planes, machine-gunning jeeps, heat-seeking missiles, gunboats and submarines.