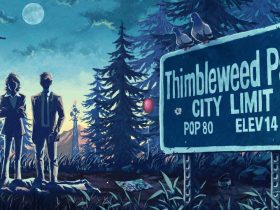 Nintendo has inadvertently confirmed that Travis Strikes Again: No More Heroes will receive a physical release and post-launch support thanks to a season pass.

In a new three-minute trailer used to promote the fact that there are “over 1,000 games for everyone on Nintendo Switch,” the physical box art for Grasshopper Manufacturer and Goichi ‘Suda51’ Suda’s Nintendo Switch exclusive can be spotted at its conclusion – which states that it “includes Season Pass.”

This comes a week after a product listing on Amazon.com had leaked its existence, which had made a passing reference to the fact that it “includes Season Pass that grants access to future downloadable content.”

Travis Strikes Again: No More Heroes takes place seven years after the events of No More Heroes and picks up with The Bad determined to exact his revenge on Travis Touchdown for murdering his daughter, Bad Girl.

As with the original cult classic, players can look forward to battling their way through multiple punk-rock levels to defeat over-the-top bosses.

Travis Strikes Again: No More Heroes will release exclusively on the Nintendo eShop for Nintendo Switch worldwide on 18th January 2019.