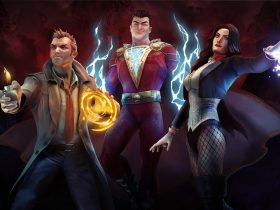 Raw Fury and Massive Damage have released a new gameplay trailer for Star Renegades, which is in development for Nintendo Switch.

From the developer behind Halcyon 6: Starbase Commander this strategy RPG is set in an endless interplanetary rebellion against The Imperium.

You will lead a ragtag squad of rebels in their desperate fight against overwhelming odds, and must work to outsmart your AI-driven adversaries to topple the galactic empire.

The fast-paced Reactive Time Battle System will challenge you to outwit your enemies with interrupts, counters and combos, with the Intelligent Adversary system generating unique enemies and bosses that “evolve as you play.”

Star Renegades will release on the Nintendo eShop for Nintendo Switch worldwide in Q3 2020.